Buddhists came together from across traditions to envision solutions to social ills and to discuss the prospect of a joint Buddhist action movement. 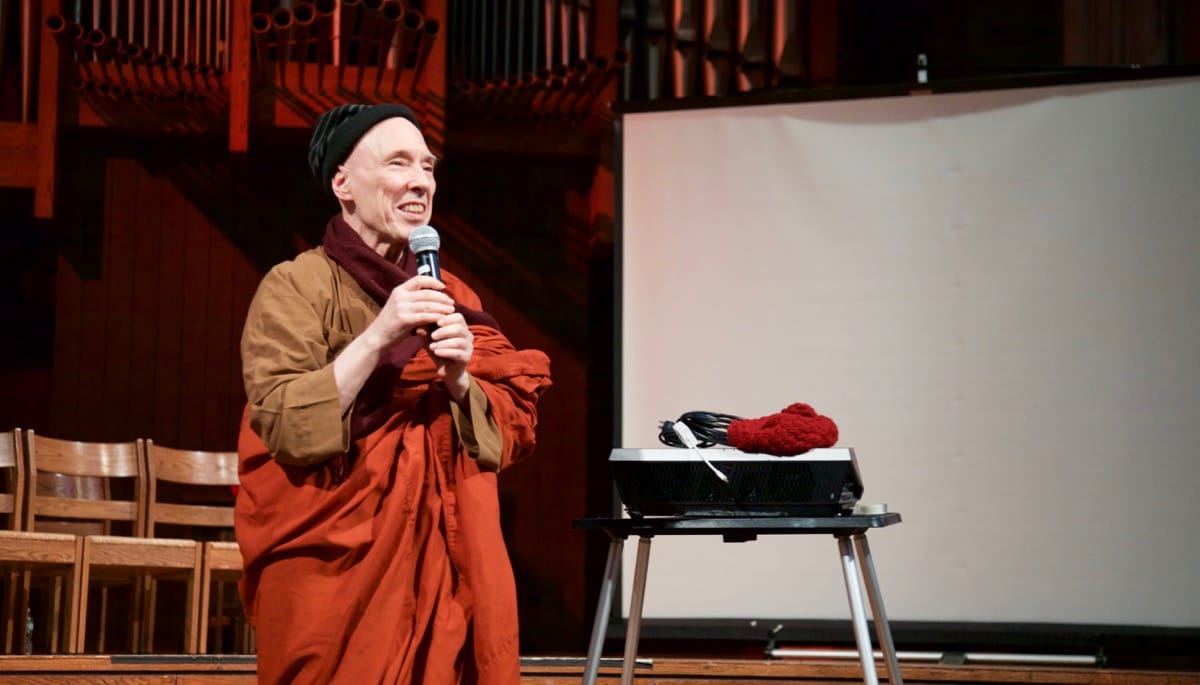 Buddhist monk Bhikkhu Bodhi was part of the organizing team for the conference.

Teachers, practitioners, monastics, and administrators. Young and old. Novice protesters and veteran activists. Buddhists from all walks of life and virtually all major traditions.

They want to join forces.

That was the message yesterday at Union Theological Seminary, in New York City, where 250 Buddhists participated in a first-of-its-kind conference, “Buddhist Action: Morals, Vision, and Justice.”

“Why come together as Buddhists?” Snyder asked the crowd. “We’ve been asked to do so. People from other faiths have asked, how do we bring in Buddhists?”

The idea behind the conference was simple: Buddhists strive to alleviating suffering. Political and social crises cause immense suffering around the world. How can as-of-yet unconnected Buddhists groups work together to help?

“The debate about whether Buddhists should be socially engaged is over.”
—Rebecca Li

The answer to that question is not simple. Unlike many other faith groups, Buddhism has no central authority, and there are differing beliefs about Buddhism’s role in politics and activism. Even among liberal American Buddhists, there is no consensus on the most important issues. Groups might focus on climate, immigration, heritage, justice, incarceration, food security, education, poverty, misogyny, racism, pollution, or other issues.

Yet, presenters noted, Buddhists do share common fundamental goals — like the promotion of wisdom and the alleviation of suffering. All Buddhists share a dedication to compassionate action, and so Buddhist activism is grounded in love, not hate. 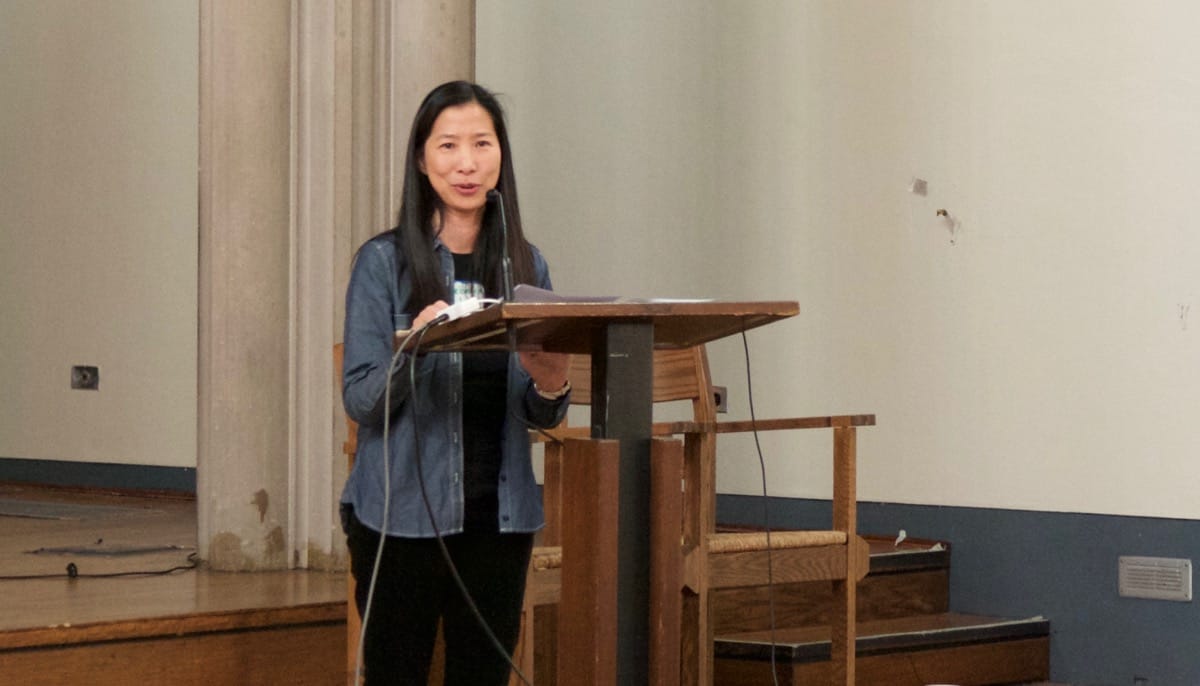 The morning proceeded with presentations by Buddhist activists, teachers, and organizers. Chan Buddhist teacher Rebecca Li generated applause with the statement, “The debate about whether Buddhists should be socially engaged is over.”

“What do we do,” she asked, “when we find disagreement between the Buddhist teachings and our current political situation?”

Zen teacher Rev. angel Kyodo williams gave a rousing speech via Skype, telling the crowd, “We don’t have a personal liberation without a collective liberation.”

Historically, many Buddhist groups have undertaken social projects to alleviate suffering, but those projects are often siloed and apolitical. The conference organizers sought to gather that energy and focus it on the most pressing issues of our time.

So far, Buddhists have largely been absent from national social justice conversations.

“The white middle class occupies a large portion of the power in this community. They were comfortable,” said Snyder.

“I think it’s fascinating to meet people who practice very deeply and bring that practice into action — who sit right at the face of suffering and keep going,”
—Sharon Salzberg

“Buddhists often have strong conscientious commitments on issues of public concern,” Ven. Bodhi said. “But we don’t form together into a group to express a joint position on these vital issues. That struck me as the crying need of our time.”

“There’s been a widespread attitude among Buddhists that politics is something to be avoided,” Bhikkhu Bodhi said. “Politics is corrupt, dirty, divisive — but it’s also the field where the great moral issues of our time are being debated. Racism, protection of immigrants, the climate crisis. All these crises come together. If we are to solve these problems, it’s necessary for us to roll up our sleeves and get into the action.” 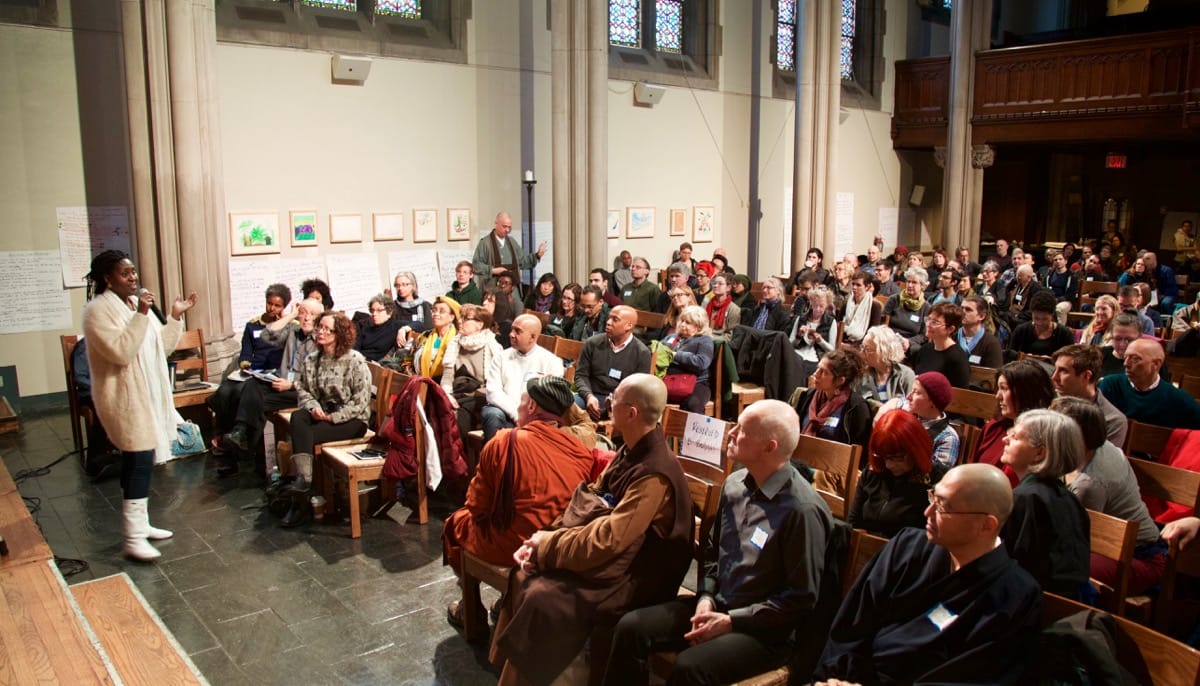 Beatrice Anderson, a conference facilitator and the founder of Love Circle Sangha.

As the conversations about a national organization evolved over the first half of 2017, it became apparent that creating something on that scale was too ambitious to start out with.

“We decided,” Bhikkhu Bodhi explained, “to go to work at the local level and try to generate a number of nodules around the country, to eventually join together in a coalition. The meeting today is the starting point.”

The idea of a small local meeting ballooned as soon as the event was announced. The organizers expected 100 attendees from the New York area. 350 Buddhists from across the United States registered for the event.

The coordinators avoided a top-down organizing structure and identified no predefined outcomes. Facilitators hosted conversations in breakout groups, discussing general themes, and guiding conversation toward practical goals and next steps.

“Today was the starting point for the emergence of a collective Buddhist voice of conscience.”
—Bhikkhu Bodhi

Attendees’ various aspirations emerged in conversations throughout the day. Snyder said he hoped the day would be a chance for personal connections to form. Dedunu Suraweera, a member of the Buddhist Peace Fellowship (BPF), said she hoped to see more action and community come from the event. LiZhen Wang, the BPF’s network director, said they hoped the day would be a chance to practice relating and organizing. Buddhist teacher Sharon Salzberg hoped to learn more about how activists manifest compassion in the face of suffering.

“I think it’s fascinating to meet people who practice very deeply and bring that practice into action — who sit right at the face of suffering and keep going,” said Salzberg.

Throughout the day, many participants and organizers expressed enthusiasm for Bhikkhu Bodhi’s original idea — a coalition of Buddhist organizations geared toward addressing society’s ills.

“I think that Buddhists need to organize locally,” said Snyder. “Then those local movements can connect to each other and create a national movement. I would like to see a coalition come out of this. If something like that were to happen nationally, it would be an important move for the moral authority of the religious community, generally. The Buddhist voice is important.”

Through the afternoon, participants broke into groups and put their ideas down on chart paper. On one sheet, each group identified overarching principles for the conversation, like playfulness, compassion, receptivity, engagement, and openness to disagreement. Then they discussed the purpose of the meeting. At the fore was the idea of giving Buddhists a more prominent position as a voice of justice, the importance of Buddhists working to alleviate suffering by engaging in social issues and politics, and a need for education about social issues in Buddhist communities.

As participants discussed how to organize such a movement, many focused on creating a network or coalition that would support communities and initiatives already underway. Finally, next steps for creating such a coalition were identified. 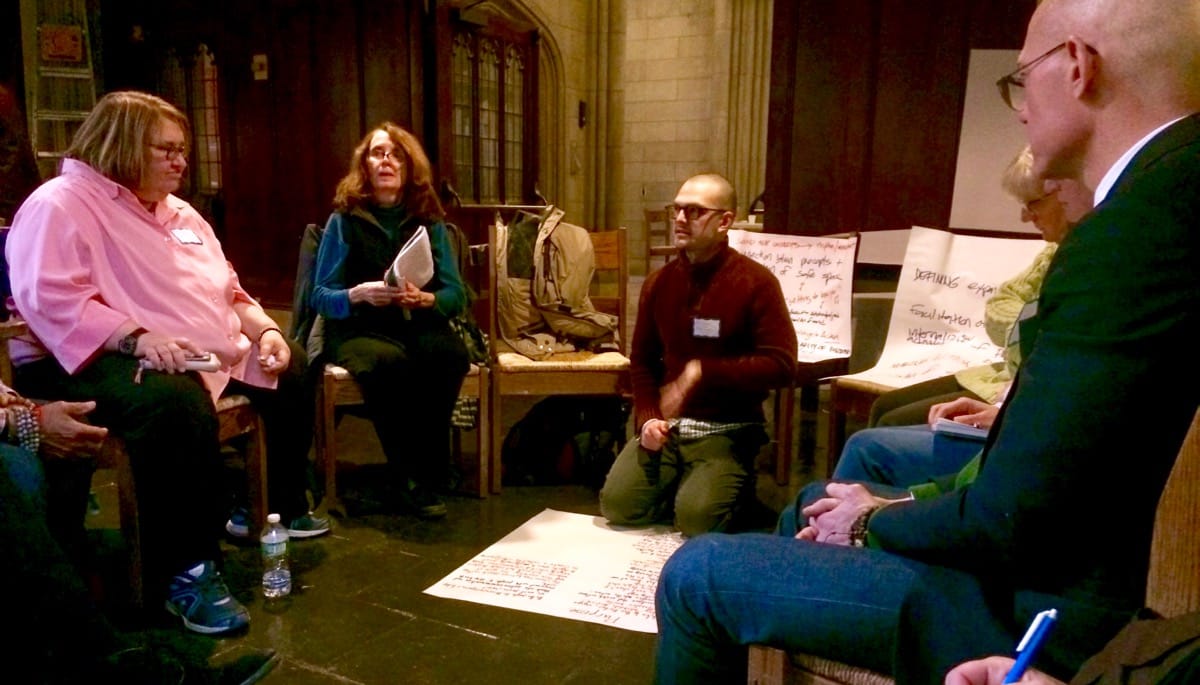 A breakout group brainstorms the purpose of a Buddhist movement.

“Today, people got to talk about what moves them and what sorts of values they should uphold,” said Caroline Contillo, a meditation instructor and facilitator at the event. “It was a process of listening and beginning to build relationships. The next step is figuring out what this organization could look like.”

Bhikkhu Bodhi gave the closing remarks at the end of the conference. He said that the day was “the starting point for the emergence of a collective Buddhist voice of conscience.”

Finally, he led a meditation that was unlike any meditation most had ever done before.

“Imagine you are an immigrant from El Salvador in America,” he started. Over the next ten minutes, Ven. Bodhi guided the group through imagining the suffering of deportation, voter suppression, and environmental racism.

The event ended with an air of uncertainty, and a recognition that much remained to be decided. No one is sure what will come next. But that seemed to be the point of the whole event: in a moment of uncertainty, anything is possible.