Richard Reoch reports from the refugee camps in Bangladesh. 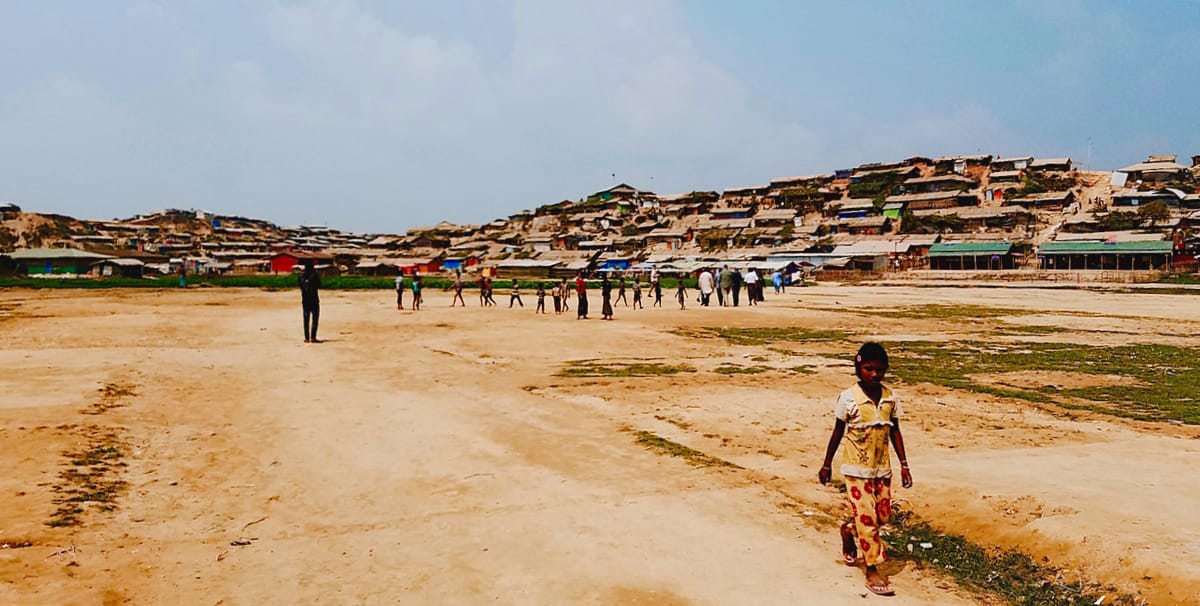 The Buddha was no stranger to genocide. His own people, the Sakyas, were the victims of mass slaughter. One of the final acts of his life, recounted in the opening verses of the Mahaparinirvana Sutra, was to refuse a request to give his blessing to an act of genocide.

I held the Buddha in my heart as I entered the Rohingya refugee camps on the Myanmar–Bangladesh border. These people are fleeing what they call the “Buddhist Terror.”

After decades of discrimination — including being stripped of their citizenship in Myanmar, a majority Buddhist nation — the Rohingya minority has been subjected to an overwhelming military assault. Their villages have been burned to the ground. Thousands are reported killed. Possibly up to a million have fled into neighboring Bangladesh.

A senior United Nations official dealing with the crisis says it “bears all the hallmarks of genocide”.

I was in the refugee camps with an international delegation of religious leaders — Christian, Jewish, Muslim, and Buddhist — to bear witness to this humanitarian catastrophe.

An old man, with a stray wispy beard and sunken eyes, grabbed my hand. In the silence between us, he enacted the plight of his people with his other hand. He made wild gestures, frantically jabbing at the air around him and up towards the sky. 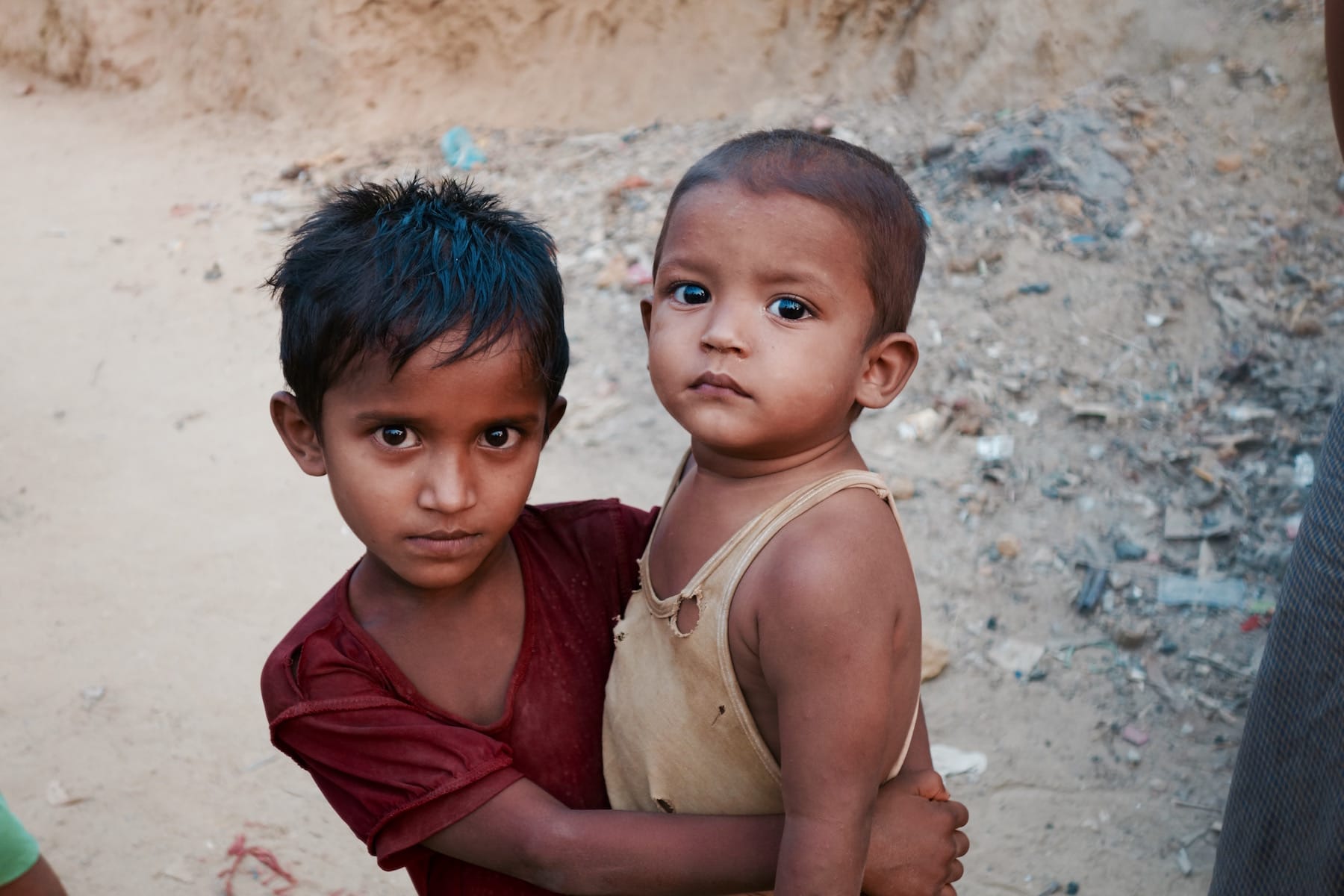 My eyes filled with tears as I looked these people in the eye and said the most difficult thing I could ever have imagined saying: “I am a Buddhist.”

Two questions were always in my mind, as they would be in the mind of any practitioner: What would the Buddha do? and What can we, as Buddhists, do to help?

It seemed, at the outset, that the most obvious answer was for everyone — regardless of faith — to do their best to be fully present. That was important for our delegation and also, as we quickly realized, for the Rohingya themselves.

We had meetings with survivors who described the almost unimaginable cruelty to which they, and the many who died, had been subjected. Again and again, they said they wanted the world to know.

When I asked to speak, I could barely find the words. I pressed my palm against my chest as if to squeeze them out.

“The Buddha did not teach this,” I said. They looked at me, waiting for the translator. “There are Buddhists all over the world who are horrified by this. We know what has happened to you and we are deeply, deeply saddened.”

Each one of them took me by the hand. Several were Muslim imams. “Assalamu Alaykum,” I said. It is their greeting: “Peace be upon you.”

Then I saw an old Hindu priest standing in the corner of the improvised shelter. (The Rohingya are predominantly Muslim, but there are also Christian Baptists and Hindus among them.) I went over, folded my hands together and said “Namaste.” This astonished him and for a moment he acted like he had forgotten how to do this himself. Then he slowly smiled, showing his red, rotting teeth, put his hands together and quietly offered me his “Namaste.”

Six months ago, the world’s media was here as hundreds of thousands of Rohingya began the fastest movement of forcibly displaced people since the 1994 Rwandan genocide. Now the cameras have moved on, leaving behind one of the most intractable and complex human disasters imaginable.

Buddhists around the world have been stunned by the horrific scenes of these victims who now face the threat of the monsoon rains turning their makeshift camp into a sea of mud.

An international Buddhist Humanitarian Project is now underway, attracting signatures and donations to support the Rohingya people. It went live online during our mission to the camps. 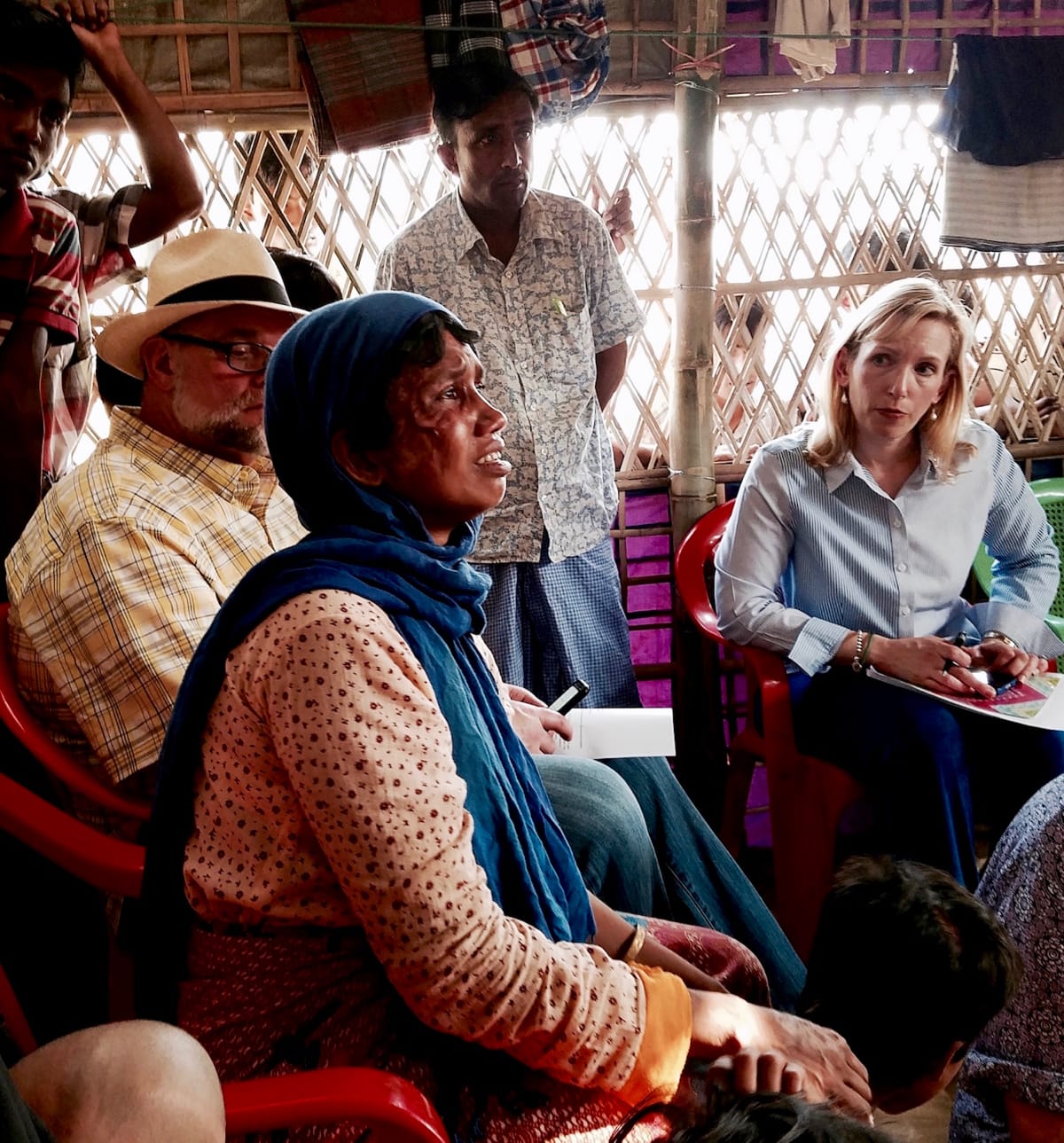 Our delegation included specialists in trauma. We divided up into small teams to meet and question survivors. One was a woman with horrific scars on her face. She said that when the Myanmar army attacked her village she was forced into a house with other women. Once they were inside, the troops set fire to it, killing all of them but one. She was the sole survivor.

“I hid out in the forest with a burned body for four days without any food or water,” she said. “A group of people was passing by. They saw me and they carried me to a safe place and finally gave me some food.”

The testimonies we recorded and the medical accounts of injuries are too appalling to print, as are the descriptions of rape, gang-rape and sexual mutilation.

The scale of this is almost beyond comprehension. By the beginning of this year, UNICEF said there were more than 250,000 Rohingya children living in and around the overcrowded camps. It is now estimated that 60% of them have lost either one or both parents. Most have been eyewitnesses to the slaughter.

There was another question in my mind, one that many have asked me: How could Buddhists do this?

How could these atrocities be the work of the military of a majority Buddhist nation? How could the flames of hatred have been fanned by monks — even a minority of monks — wearing sacred saffron robes?

How could one of the world’s great wisdom traditions — renowned for its teachings on unconditional compassion and universal loving kindness — spawn any kind of extremism or give rise to ethno–religious prejudice and mass killing?

I put this question to a group of Rohingya. “We lived together side by side for generations,” one of them said. “We have no idea what came into their heads.”

Like the old man wildly gesticulating to the sky, these people seemed so deep in shock, it was as if this horror had rained down upon them from an inexplicably angry heaven.

But I have heard the answer to my question from the lips of monks themselves. They warn me in their own words that Buddhism is under mortal threat. Witness, they say, its disappearance from Asian lands over the centuries, the demolition of the Bamiyan Buddhas, the arrival of evangelical Christianity, and the resurgence of Islam. A monk in Myanmar preaches to the armed forces that the killing of non-Buddhists is equivalent to the killing of non-humans and has no negative karma.

In the evenings after visiting the camps, I would try to wipe away the horror of what I had witnessed, as if it could be washed off like dirt in a shower.

I had brought with me a beautiful little book of traditional Buddhist devotions, in Pali and English. It is part of the Theravada culture of South and Southeast Asia. I opened it, calling on the Buddha for help in that living hell.

As I slowly turned the pages, I found the Gatha of Victory, the Jaya Mangala Gatha. It recounts the times in his life where the Buddha’s opponents tried to kill him, humiliate him and defeat him. He faced raging elephants, demons, and life-threatening attacks. The verses praise his weapons of victory: generosity, patience, loving-kindness, wisdom, the power of the mind, and serenity of being.

These deeply human qualities are under attack — in this dreadful tragedy and all over today’s world. But, like the Buddha, they have not been defeated.

Within Myanmar itself, courageous monastics are working to restrain the tide of hatred. They are cooperating with other faith leaders, intervening to stop outbreaks of violence, opening their temples to people of all communities fleeing attack, and running educational programs on tolerance and non-violence. 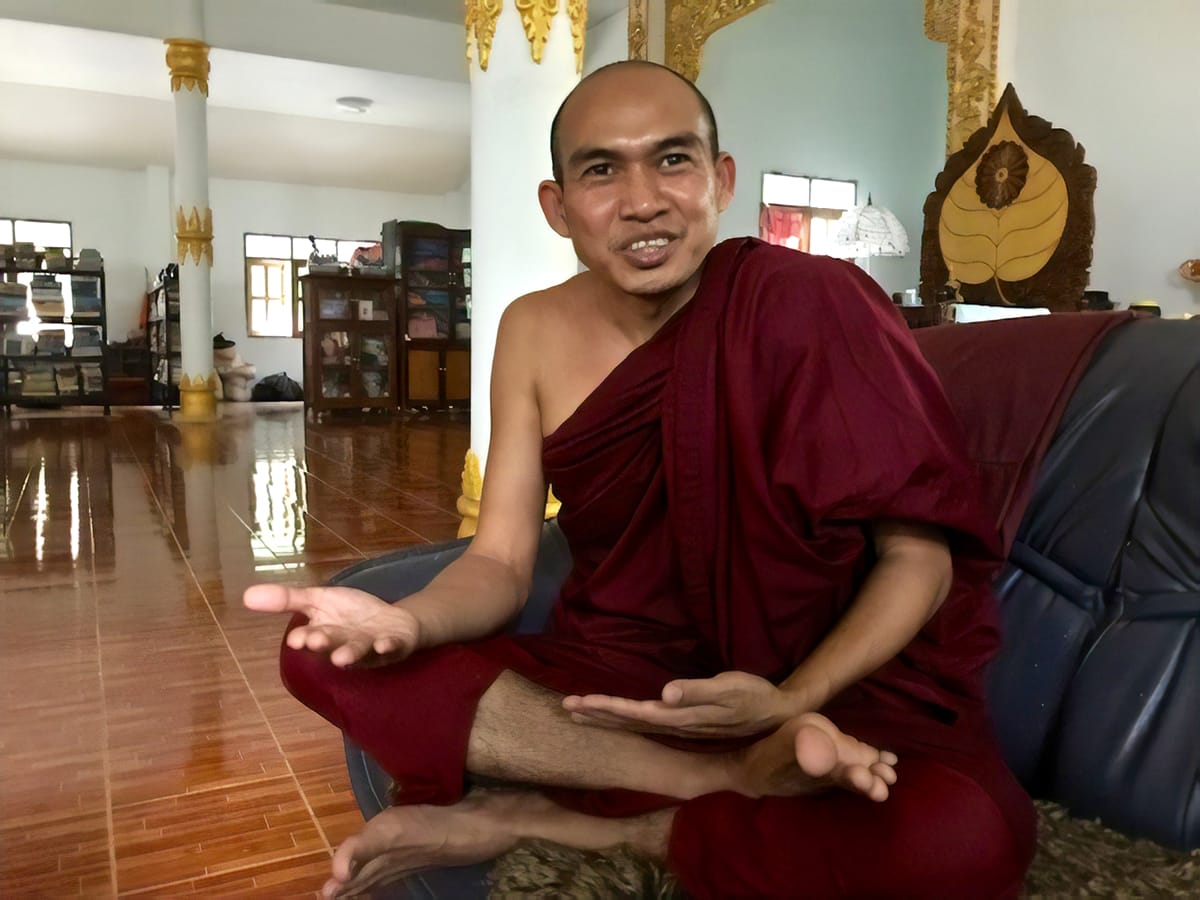 Some are taking tremendous risks to speak out. A widely respected monk, Ashin Issariya, recently called a news conference where he was critical of those fanning the flames of hatred. “If you want to protect Buddhism, you must abide by the rules of conduct set by the Lord Buddha,” he said. His news conference was disrupted by dozens of “patriotic” monks. He received death threats and was told his monastery would be destroyed.

So often when we see devastating news reports, we have no idea how to help. Our sense of helplessness makes the compassionate pain we feel all the more intense. This time, there is something we can do.

The worldwide Buddhist appeal from the Buddhist Humanitarian Project is a non-sectarian initiative launched in response to this crisis. By adding your name you join hundreds of Buddhist leaders and teachers from 25 countries who are asking Myanmar’s monastic leadership to defend Buddhist values and turn back the flood of hatred and violence.

The appeal will go to the country’s top monastic council. Last year, the council banned the most outspoken monk, who had previously been imprisoned for hate speech, from giving sermons for a year. They warned he would face “action under the rule of law” for any breach. The council also ordered his nationalist organization to cease its activities.

“In the Dhamma, there is no justification for hatred and violence,” the appeal says. “Mean-spirited words and direct provocation stand in stark contradiction to monastic precepts and Buddha’s teachings on universal morality, peace, and tolerance.”

If ever there was a time to support those words of peace and stand up to what is happening, it is now.

I am deeply grateful to Hozan Alan Senauke, Vice-abbot of the Berkeley Zen Center who has worked tirelessly to create and launch this appeal. He was also part of the interfaith delegation to the camps.

As an eyewitness to what has happened, I am asking you to read the Buddhist humanitarian appeal, sign it and give what you can to the humanitarian effort. If you wish, please share this appeal with any Buddhist friends and communities you may know so that we reach as many as possible.