Rev. Kenjitsu Nakagaki wants to educate the West about the history of the manji, a counterclockwise swastika that means “good fortune” in Japanese. 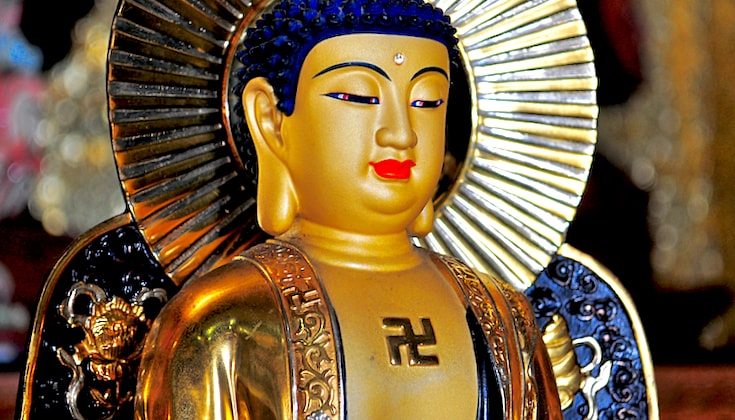 When Rev. Kenjitsu Nakagaki, a Japanese Buddhist priest, moved to Seattle from Osaka in 1985 he knew of swastikas only as manji — a Chinese character that means “good fortune” in Japanese. When he used a swastika in a sacred ceremony, he was chastised by a temple member, who told him he “couldn’t do that in this country.” It was then that Nakagaki learned the swastika was universally associated with hate

“After I got that lesson, I decided not to use that particular symbol — for the past 25 years,” Nakagaki, now based in New York City, recently told Japan Times. “But this narrow and limited perspective is unacceptable for those of us who value and have grown up with the swastika in our religions and culture.”

Now, Nakagaki is trying to raise awareness about the swastika’s peaceful Sanskrit origins. His new book, The Buddhist Swastika and Hitler’s Cross, is Nakagaki’s way of ending the decades-long prohibition against the symbol. He details the swastika’s Eastern roots and traces its use in Hinduism, Buddhism, Jainism, Judaism, Christianity, and Islam. All these uses predate the Nazi’s appropriation of the symbol by centuries.

It has been a part of Japanese culture since the introduction of Buddhism about 1,500 years ago.

The swastika comes in many iterations; some have dots, swirls, or other marks. Buddhism’s version stands square with left-turning arms, while Hitler’s was right-turning on a 45-degree angle.

While the swastika is taboo in the West, it has been a part of Japanese culture since the introduction of Buddhism about 1,500 years ago. The word “swastika” comes from the Sanskrit for “good fortune” or “well-being.” During the Meiji Era (1868-1912), Nakagaki says the swastika was so commonly used, that it was standardized as a temple marker on maps.

In November, Google reignited controversy around the swastika when it accidentally used swastikas to identify certain hotels on maps. Google told HuffPost that the icons were “Buddhist symbols of worship” and the company was working to fix the problem.

Other controversial uses of the Sanskrit swastika have popped up in recent years. In 2015,  a Jewish student was suspended from George Washington University after posting a Sanskrit swastika — purchased in India — on a bulletin board. In 2017, Salon reported that DA Designs, a European clothing company, tried to “reclaim” the swastika as a symbol of peace and love by putting it on t-shirts. This branding effort was met with fierce criticism from the Israeli Jewish Congress and the Auschwitz Memorial Museum.

Nakagaki’s book is a continuation of his 2012 dissertation at New York Theological Seminary and was first published in Japan in 2013. After American publishing houses were reluctant to print it, Nakagaki self-published on Amazon in 2017. This fall, the book was republished by Stone Bridge Press.