Artist and film director Ivan Cash shares five ways the practice of meditation has benefitted his life, creativity, and career. 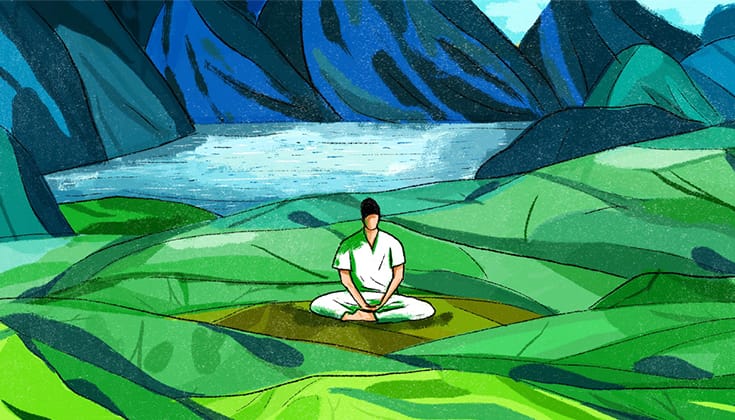 Ten years ago, my mom gave me a college graduation gift that would change my life forever: a voucher for a 10-day meditation retreat. I packed my basketball (I’d heard there was a court on the premises) and looked forward to a relaxing, social, summer camp-esque getaway.

During the orientation, I was horrified when they explained we’d be taking a vow of “noble silence.” There was to be no eye contact, no speaking, no reading — nothing — for the entire ten days. Had it not been for carpooling, I would have taken off right there.

With no escape, I slogged my way through the 10 days, eyes down and mouth shut, promising I’d never make myself do anything so dreadful again. The days consisted of alternating between sitting and walking meditation from 5 a.m. to 9 p.m. There was nothing pleasant or easy about those 10 days — no real transcendent moments of enlightenment — and yet I felt a distinct difference. As the days passed, I began to notice subtle, yet powerful, changes in myself.

I’ve since sat more than 100 days on silent meditation retreats the longest stretch being a straight 30 days. I’ve witnessed firsthand how the practice of meditation has deepened my own sense of compassion, enriched my creativity, aided my self-awareness, and even advanced my career. For me, this simple practice has been deeply beneficial for these five reasons:

We all grow up with a set of beliefs based largely on our cultural upbringing. One of the greatest gifts meditation has given me is the opportunity to shed this conditioning and choose what beliefs are most important to me. When I’m on retreat, I have the opportunity to observe my thoughts, feelings, and opinions without taking any action. This has allowed me to discern what values are aligned with how I want to live versus what’s been habitually or subconsciously engrained.

In 2011, I moved overseas from San Francisco to Amsterdam to pursue what I thought was a dream job for a well-known, major advertising agency. Within months, I realized that neither the prestige that came with the job, nor the open-bars, were worth endless weekends I was spending holed up at the office. I desperately wanted to quit, but doing so felt out of the question until my year-long contract was up. “You can’t quit your job before the one year mark,” I told myself. “People will think you’re a total failure.”

Learning how to change my perspective from a ‘fixed’ reality to one that’s malleable has allowed me to live in alignment with my values, feelings, and beliefs.

With the help of a mentor and insights from my meditation retreat experience, I realized that I could do whatever I wanted with my own life, even if that meant breaking a contract, defying social norms and not meeting others’ expectations. So one week later, I resigned. It was the scariest decision of my adult life, but I was pleasantly surprised at how my colleagues took the news. My bosses even admitted they were envious of my decision to look past status and shed the “golden handcuffs.”

Two of my most successful projects, Snail Mail My Email and Occupy George were created within a few months of my resignation.  Learning how to change my perspective from a “fixed” reality to one that’s malleable has since allowed me to live in alignment with my values, feelings, and beliefs.

While on retreat in the high desert of Joshua Tree, California, I discovered a massive ant hill right off the main walking path. I became fascinated observing the ants working together and made a daily ritual of walking over to watch them for a little while.

On the final day of retreat, I began my walk towards the ant hill and was horrified to find a fellow retreatant kneeling down, observing my ant hill. Even worse, there were other retreatants nearby that could have been mistaking it for his ant hill. My entire body filled with hot rage at this phony intruder.

Of course, the ant hill was neither his nor mine, nor did it matter who was seen staring at it. Having the space to observe the intensity of my reaction over something so insignificant made me aware of how ridiculously competitive I can be. Meditation allows me to be more aware of instances where I’m coming from a place of ego and therefore (hopefully) redirect my mentality.

We are living in a time of unprecedented connection, and yet we’re more disconnected than ever. I’m often amazed at how caught up we all are in our digital screens, completely removed from the people around us.

Being on retreat and the solitude that comes with it allows one to quiet the mind and be fully present. For me, this reveals an awareness of the anxiety or insecurity that so often keeps me locked into a screen. It offers the possibility of a heightened connection to others. I love the immediate aftermath of retreats because I fall in love with so many people — the grocery store cashier, a gardener, a neighbor, a homeless person.

This sense of connection and open heartedness is a quality I’ve embraced in much of my creative work. In the Last Photo Project, I ask strangers to the share the last photo on their phone. This project in particular has benefited tremendously from my meditation practice because I’m able to really connect with strangers and hold space for their story. When we’re both fully present in the moment together, the most personal and captivating stories are revealed.

To further connection, I’ve also created a multitude of projects that encourage a mindful pause from technology. Facebook Sabbatical invites users to take a break from the platform, and I also created ‘No Tech Zone’ signs and installed them in parks across San Francisco to inspire others to drop their screens and connect to the people around them.

It might not come as a surprise to you that meditation retreats are fertile ground for creativity. In our day-to-day lives, the endless list of to-do’s and logistics chip away at our inherent imagination. On retreat, free from distractions of the modern world, the mind is able to finally settle. When my mind is settled, it explores foreign internal lands and territories on its own, forming new, previously unimaginable ideas and connections. Ideas seem to arise from thin air, revealing themselves in the most mysterious of ways as silence and stillness work their magic.

On one retreat, I became inspired to make a short documentary about an 86-year old farmer I knew growing up. I’d never made a documentary, but rose to the challenge and followed inspiration. The film turned out to jumpstart my career as a film director.

5. It makes us less reactive.

On retreat, something as simple as an irritating itch is an opportunity for growth. When I feel an itch, my immediate inclination is to scratch it, but on retreat, the instruction is to simply be mindful of the discomfort rather than instinctively take action. When I’ve followed these instructions, the itch has changed shape, location, and eventually disappeared. I’ve found the same to be true with most bodily sensations, including pain.

As I build up resilience through meditation, I find I can not only tolerate more physical discomfort, but also more mental and emotional turmoil. During a high stakes music video shoot a few years ago, the top-of-the-line camera began inexplicably short-circuiting. I became really irritated by how much time this technical problem was costing us and watched my mind begin to spin out.

Thankfully, I was able to return to the mindfulness I’d cultivated in meditation and simply notice my anger without lashing out. I could even make light of the situation, keeping morale up amongst the crew. We did the best possible job within our means, and the music video went on to receive critical acclaim.

All of this said, meditation is by no means a be-all, end-all technique (News flash: nothing is). I’m still learning all the time. But I can confidently recommend that for anyone looking to build their creative career, it’s the best thing you can do.

Ivan Cash is an award-winning interactive artist, film director, and founder of Cash Studios. His conceptually-driven, genre-bending media projects spark meaningful conversation and impact culture, having been featured in The New York Times, CNN, TIME, The Guardian, Fast Company, Buzzfeed, The Atlantic, and received multiple Vimeo Staff Picks and Webby Honorees. He has been recognized as a Forbes 30 Under 30 artist, an Art Directors Club Young Gun, and a Print New Visual Artist. His work is in the permanent collection of the Victoria & Albert Museum in London and has exhibited internationally, from the Brooklyn Museum to the Australian Museum of Applied Arts & Sciences. You can find more about him on ivancash.com