I discovered the poetry of the medieval Zen Buddhist monk Dōgen by following voices through time. I was reading a heartfelt poem by Ryōkan, an eighteenth-century poet, in which he recounts discovering a six hundred-year-old manuscript, written in the hand of Dōgen, the founder of the Sōtō school of Zen in Japan. Ryōkan admits to being so moved that his tears fell on the worn page. Ashamed that he’d marred the manuscript, he put it back where he found it and told the others it was caught in the rain.

Before this, I hadn’t heard of Dōgen, but Ryōkan’s poem compelled me to “meet” him. Likewise, it was hearing the Miles Davis version of John Lewis’s song “Django” that moved me to want to “meet” Django Reinhardt and his music.

Like Miles Davis, Django Reinhardt was an astounding innovator. He redefined jazz guitar in the 1930s with complex, fiery solos that were unprecedented. Born in 1910 in Belgium, Jean Reinhardt, whose gypsy name Django means I awake, lived in a caravan. By the time he was five, his father had abandoned the family. Django spent most of his youth in gypsy encampments close to Paris, playing the violin by ear. He became fascinated with the banjo and by twelve was a precocious professional. By fourteen, he was a star. But at the age of eighteen, he was maimed and almost killed in a caravan fire. His left leg and hand were horribly burned. The third and fourth fingers of his left hand had to be burned again with silver nitrate, so they could heal and be usable. The burns on his leg were so bad that doctors wanted to amputate it. Reinhardt refused the surgery. He left the hospital a short time later and within a year was able to walk with the aid of a cane. 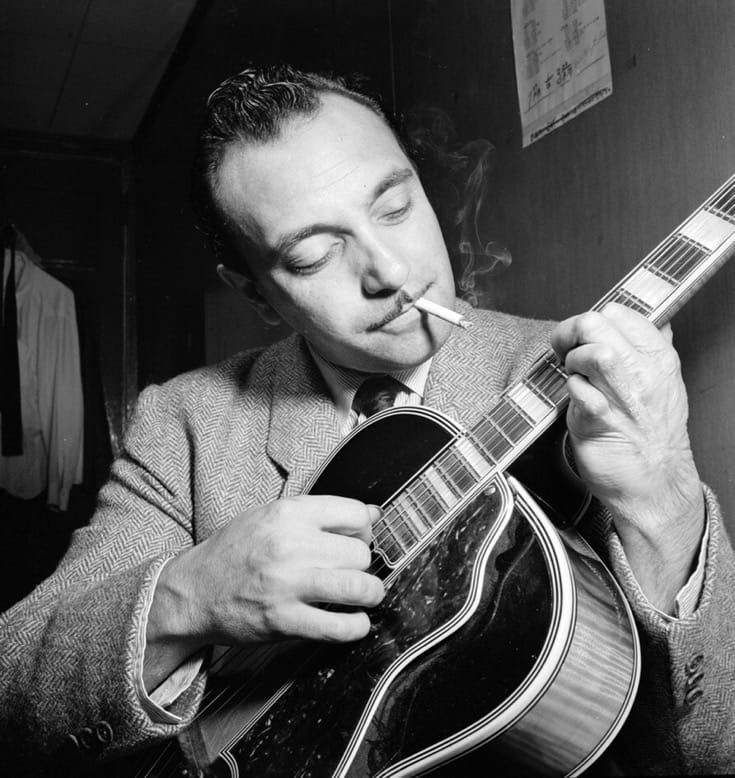 During a painful rehabilitation, he found it almost impossible to play the banjo. His brother Joseph bought him a guitar. Forced to try different things in order to go on, Django relearned his craft in a completely new way. He played all his guitar solos with only two fingers, forming new chords. As Reinhardt biographer Michael Dregni says:

Instead of playing scales and arpeggios horizontally across the fretboard, as was the norm, he searched out fingerings that ran vertically up and down the frets, as they were easier to play with just two fingers. He created new chord forms. . . . He pushed his paralyzed fingers to grip the guitar as well. . . . Employing these chord forms, he began to craft [an unprecedented and] fluent vocabulary [on the guitar].

Would Django Reinhardt have discovered a new way to play jazz guitar, if he hadn’t been transformed in that fire? Would Claude Monet have discovered his masterful Water Lilies, if his vision hadn’t been undone by the onset of cataracts? Would Beethoven have discovered the Ninth Symphony, if his deafness hadn’t opened him to the deepest music of all, blossoming out of silence? Perhaps all this would have happened anyway, in a different manner, at a different pace.

Excerpted from The One Life We’re Given by Mark Nepo, published by Atria Books, a division of Simon & Schuster, Inc.

Beloved as a poet, teacher, and storyteller, Mark Nepo is the author of the #1 New York Times bestseller The Book of Awakening. His new book is The One Life We’re Given: Finding the Wisdom that Waits in Your Heart (Atria, July 2016). In fall of 2016, Mark will have a new book of poetry, The Way Under the Way. For more, visit: MarkNepo.com