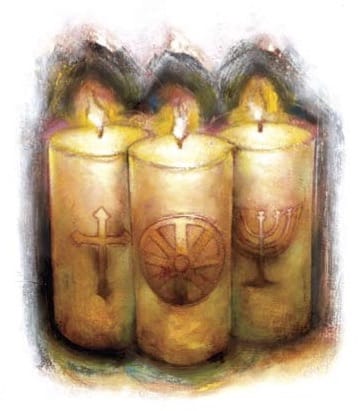 A Heart Afire: Stories and Teachings of the Early Hasidic Masters
By Zalman Schachter-Shalomi and Netanel Miles-Yepez
The Jewish Publishing Society of America, 2009; 406 pp.; $45 (cloth)

The question of how one understands and relates to the divine in the Judeo-Christian tradition as compared with Buddhism is a fascinating one. On the surface, there seem to be radical differences. Buddhism is a nontheistic religion, one of wisdom and awakening. The Judeo-Christian tradition is firmly based on an omnipotent God, the Creator, whom one worships, obeys, and communicates with. On the Buddhist path, we are freed from samsara, the painful cycle of life and death. On the Judeo-Christian path, the fruit of practice is love, salvation, service to others, and a fulfilled life.

Two recent books deal with how to integrate Buddhism and Judeo-Christianity. Although these books have the same goal—to bring mystical experience to religious doctrine—they have very different approaches.

In Without Buddha I Could Not Be a Christian, Paul F. Knitter, an ex-priest, Catholic theologian, and professor, describes how he came to have an inability to relate to a God whom he had to petition and was separate from him. He questioned the wisdom of projecting personal views upon God, which, he began to believe, leads to fantasy, dualism, and lack of personal responsibility. In A Heart Afire, Rabbi Zalman Schachter-Shalomi, founder of the Jewish renewal movement, and his disciple Netanel Miles-Yepez present the life, teachings, and practices of the early Hasidic masters. The approach is lyrical and straight from the heart.

The Jewish renewal movement, like the early Hasidim that Schachter-Shalomi writes about, seeks to renew the Jewish teachings and traditions and bring them to all people. Schachter-Shalomi is the founder of Aleph’s legacy project (part of the Jewish renewal movement) and he offers online courses at the Buddhist university Naropa. He was part of a Jewish delegation that visited the Dalai Lama, is engaged in interfaith dialogue, and is open to ways in which Buddhist wisdom can shine light on Jewish traditions. Schachter-Shalomi defines himself, however, as a neo-Hasid, and his presentation of Hasidism is a manifestation of the mystical experience itself.

Hasidim is about having an intimate, personal relationship with God. It is a mystical movement, founded by the B’a al Shem Tov (master of the name). A great rabbi, mystic, healer, miracle worker, and ecstatic, he was deeply concerned about the needs of others, including beggars and peasants. Although, he spent years meditating and praying in a cave, receiving profound teachings, he always returned home for Sabbath—to his wife, children, and community. In Jewish practice, the spiritual and physical worlds are not separate; each informs and elevates the other.

The Hasidic movement arose in the eighteenth century as a reaction to the strong emphasis on intellectual and legal practices of Judaism, as well as the hardship and depression prevalent at that time. There was a great need for the “divine flow” of joy and hope into everyone’s life, and Hasidim opened the gates of prayer and divine assistance, leaving no one out. The simple and unlearned were particularly extolled. It was thought that simplicity and lack of education allowed one to more easily have direct contact with God. God was reached through song, dance, celebration, prayer, love, and, most important, a pure and sincere heart.

A rich collection of teachings, stories, and anecdotes, A Heart Afire is filled with the actual life, struggles, religious practices, and wisdom of the Ba’al Shem Tov and his successors. We see how the mystical is present in the most mundane everyday experiences, how sustenance, relationships, understanding—everything in life—is due to divine assistance.

For those new to Hasidic practice, some of the anecdotes told by and about the great masters may at first seem fanciful or hard to believe; however, it is well worth suspending disbelief, neither viewing the stories symbolically nor dissecting them. Like Zen koans, these stories themselves are practice, and the practitioner must enter whole-heartedly into the essence of the teachings, which the stories convey. The anecdotes then have the power to provide tremendous wisdom, humor, and love.

I cannot recommend A Heart Afire strongly enough. As years go by, it will be considered a classic.

Without Buddha I Could Not Be a Christian is a courageous, deeply personal book. Having heard the call to serve God at the age of thirteen, author Paul Knitter studied in seminary. Now, risking being thought of as a heretic, he looks deeply at the Catholic dogma that has slowly lost its hold on him. And, without giving up Catholicism or his identity as a theologian, he brings a mystical dimension to his Catholic practice so that it regains meaning and relevance. In the book, he makes an attempt to illuminate and re-vitalize the Catholic teachings based on his experience with Buddhism.

Every page is informed by a heartfelt need to find the truth of who he is, what he truly believes, and what his religion actually means. In an effort to do this, he has studied with—and quotes—Buddhist teachers; attended retreats; and is conversant with Tibetan Buddhism, Vipassana meditation, and the general Buddhist view of life. Buddhist practices, particularly meditation, have given Knitter the ability to introduce what he beautifully calls “the sacrament of silence” into his prayers.

Each chapter explores a central Catholic doctrine, reinterpreting and redefining it based upon his Buddhist experiences and understanding. In each chapter he “passes over,” as he says, to view the situation through a Buddhist lens. He then takes what he discovers and “passes back” to Catholicism, reinterpreting the ideas and beliefs that gave him difficulty so that he experiences them in a new form.

Some of the doctrines he explores and redefines in Buddhist terms include the will of God, God as the triune, Jesus as the only Son of God, Jesus as the Savior, action versus contemplation, creating peace versus being peace. He deals intensively with the nature of language and words and the limits they impose. Despite his own preoccupation with words, Knitter advises the reader to understand language symbolically, not literally. Borrowing from the Zen lexicon, he reminds us that words are simply fingers pointing to the moon. Fingers are not the moon.

In his desire to maintain his identity as a Catholic theologian, some of the conclusions he reaches are inevitably based upon concepts and words. At one point he distinguishes between buddhanature and the Spirit of Christ, saying that one is founded upon wisdom, the other upon love. However, these definitions are words only, not the moon itself, not the true taste of buddhanature nor the Spirit of Christ, which, when experienced directly, cannot be categorized.

The book presents and summarizes many Buddhist practices. The reader is led through a tour of the Buddhist world, hearing different teachings. Knitter wants tools; he wants a practice that “works.” At one point, he describes these practices as recipes and sometimes I had the sense of reading a cookbook with all kinds of ingredients listed for enlightenment, depending upon one’s tastes and needs. But as the great teachers have consistently told us, true awakening only begins when we rid ourselves of recipes, strategies, and demands.

For me, this book emphasized the futility of trying to answer certain kinds of questions intellectually. My head was spinning with all the passing forward and passing back. That said, Without Buddha I Could Not be a Christian is a worthy book, which will help many people bridge the gap between Buddhist and Christian understanding, making it possible to integrate them. This book may also speak to other students of the dharma, coming from different traditions, who have struggled with ways to view their own experiences in Buddhist terms.

Brenda Shoshanna is a psychologist and a practitioner of both Zen and Judaism. She is the author of Jewish Dharma and Zen and the Art of Falling in Love. Her work focuses on integrating East and West, and she offers workshops on relationships and personal and spiritual development. Her new book is Fearless (The 7 Principles of Peace of Mind): becomefearless.org.