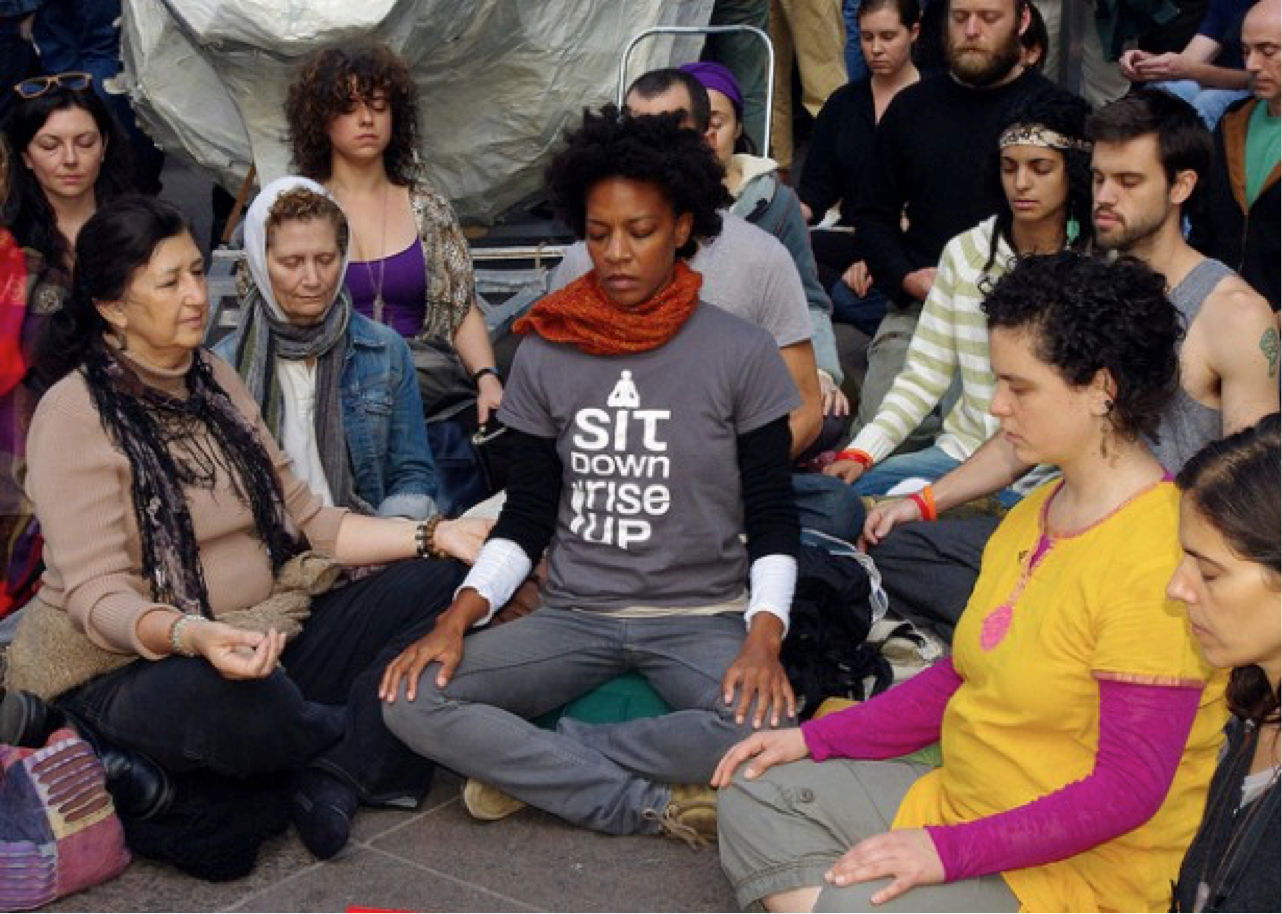 In addition to the deaths of many special people, last year saw the deaths of some misguided ideas — including my view that my practice of meditation and Buddhism can happen without full and complete engagement with our society. Disabused of that notion, I came up with a 7-point practice plan for moving myself forward. If any of this is useful to you, please make use of it.

The first three practices have to do with personal work:

1) Be Stubborn About Taking Care of Your Body.

In times of fear and stress, sleeping, eating well, and exercise are the first things to evaporate. Let’s make sure they don’t. It all starts at home, and the first thing we need to do is take good care of our bodies. I consider rest and my daily yoga practice equally important.

2) Meditate With Other People.

Meditate as consistently as you can, sure. That’s always good advice. But this year, try to meditate with other people. There is strength in numbers, and group practice totally changes the entire experience and adds inspiration and support that is hard to describe without experiencing first hand. If you can, find a local group. If you can’t, find your sangha online. If you want to practice with me, come find me at The Shambhala Meditation Center of NY, or on our podcast, Meditation in the City.

For me, the path to sanity always involves some form of creative expression (writing, drawing, collaboration with friends) as a daily way to work with my mind and my emotions. Just because the world is in turmoil does not mean we have to forsake creative expression. Creativity can be both serious and humorous. Don’t ever let anyone take your humor away from you.

The final four practices have to do with participation in community and society:

4) Be Vocal in Your Meditation Community.

Push your sangha/organization toward engagement with local issues and national ones alike. Even if your sangha is a 501c3 non-profit organization, it can advocate for a huge array of issues affecting the world. The only thing it can’t do is directly advocate for electing specific officials. However, members of the same community can always gather on their own and organize to help get out the vote for those who share the values of empathy and interdependence. Many important local elections will happen in 2017 and 2018, and you can organize mindfully with friends to find out which ones need your help.

Also, for too long, meditators engaging in social and political issues have been derailed by other Buddhist practitioners who claim either “nonduality” or “the middle path” as arguments for why it is harmful to advocate and work for specific political and social outcomes. Almost always, these arguments make engaged meditators feel some misguided shame about advocating for specific beneficial causes in the world. Nonduality and the middle path are each teachings meant to lead us toward an understanding of healthy choices, not a way to justify the evasion of participation in social issues. These false dharmic arguments can be called out, critiqued, and unraveled at your local center. Don’t let any member of your sangha tell you that actions don’t matter, or that all perspectives are equal. That’s simply not what the Buddha taught.

Vote with your dollars, with an emphasis on starving fossil fuels. Given that our federal government will be, in numerous ways, directly in the hands of Exxon-Mobil and billionaires, we have to take the movement to end the climate catastrophe under our own protection as consumers. What can you do as a consumer to end your dependence on fossil fuels? Can you compost? Stop using plastic bags and single-use water bottles? Purchase local foods? Stop eating red meat, which is far more destructive to the earth than any other animal protein? Pressure your bank to divest from the DAPL? Change banks? Change your electricity bill to only use renewable energy sources? Invest in solar-power yourself? What can you do that I haven’t thought of?

With every dollar allocated mindfully, we can also support the communities and organizations that act as sanctuaries of mindfulness and compassion. The world looks the way it does because we allocate our energy without attention. What if we really invested in the things we care about in 2017?

6) Engage in Diversity and Anti-racism Training.

It is time to stem the tide of White Nationalism and supremacy moving through our world. Can you take the time to train to undo racism in your own heart? Here is The People’s Institute, one organization which holds such trainings. For meditators, a good book to start with to begin this exploration is Radical Dharma: Talking Race, Love, and Liberation.

7) Use Social Media to Spread Accurate News and Action.

A large portion of the news media seems to have simply abandoned journalistic responsibilities. In fact, the major TV networks spent a total of only 32 minutes during the entire 2016 presidential campaign covering actual policy issues! That’s amazing — in a very bad way.

Use the platforms you participate in to spread information about stories which major news outlets are neglecting, as well as to spread the word about concrete, positive actions that friends can engage with in simple and meaningful ways. Use social media as a way to get people practicing and communicating rather than arguing in the comments section.

Recruit buddies, practice mindfulness, and engage in group actions together. How we each deal with media is one of the greatest karmic issues of our time, and one that classic spiritual teachings could not address directly. Do not participate in clickbait, and call out profit-driven media when they use misleading headlines, engage in false equivalence between “opinions,” or publish stories that distract us for the important issues of the day.

May human society flourish in the 21st century.

An earlier version of this piece appeared on EthanNichtern.com.