For more than 500 days, Rosa Sabido has sought sanctuary from deportation in a Methodist church in Colorado. In that time, she formed a friendship with Zen chaplain Joanie Trussel. The two talked with Lion’s Roar about what it’s like to live in sanctuary and how to find hope in dark times. 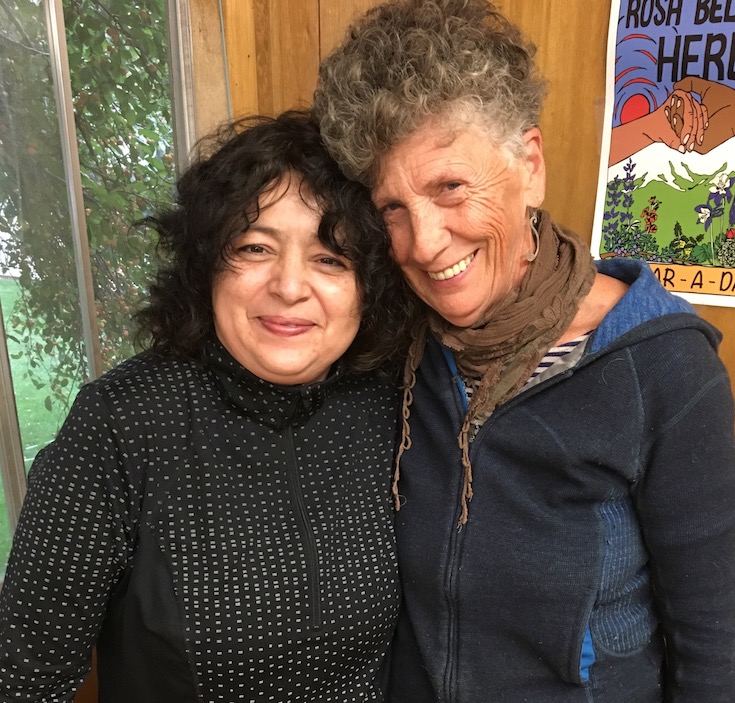 Rosa Sabido and Joanie Trussel at the United Methodist Church in Mancos, Colorado.

In the one-stoplight town of Mancos, Colorado, Rosa Sabido has taken refuge in a tiny Methodist church for more than five hundred days to avoid deportation.

When her application for a one-year deportation stay was denied last spring, Sabido found herself classified as an illegal immigrant. She couldn’t imagine returning to Mexico after living in Colorado for more than 30 years, so she resisted.

Within days, Sabido packed up her life at her little blue house, next door to her parents — both naturalized American citizens — and moved into the United Methodist Church in Mancos. The church is a designated “sanctuary” — a safe haven based on a long-standing federal policy that discourages immigration arrests at churches and schools. She hasn’t left the grounds since June 2, 2017.

Throughout her stay, Sabido has been buoyed by continuous support from the local community, keeping busy with a range of activities, such as exercise classes, cooking lessons, and meditation groups. She has formed lasting connections, including with Zen chaplain Joanie Trussel.

Sabido and Trussel talked with Lion’s Roar about their unexpected friendship, Sabido’s time in sanctuary, and the hope they share for her future in America.

Lion’s Roar: Rosa, can you tell me what it felt like when your last deportation stay was denied?

Rosa Sabido: At the beginning, I wasn’t sure what was the next step. I let people know around my workplace, and that’s how I found out that the United Methodist Church had only been a sanctuary for a couple months. I contacted the minister to request sanctuary, and then I arrived about five days later.

It was very hard for me to make the decision. It was hard to say goodbye to my home. I packed up my stuff at the office that I worked at for eight years. I left some directions for taking care of my pets. I had to leave everything in everyone else’s care. I wasn’t sure if I was going to be here for just a few weeks or a few months, but it’s been almost 16 months.

Lion’s Roar: Did you ever think it would be this long?

Rosa Sabido: My attorney tried to be realistic. She said it might take a couple weeks or months, or maybe even a year, but I never thought it would be more than 16 months. I’m likely going to be here at least until the end of this year.

Lion’s Roar: Why did you decide to stay and resist?

Rosa Sabido: I have lived here for 31 years, and I have made roots in this country. There isn’t much future in Mexico for people at my age. It’s not that I don’t love Mexico and my origins, but I know that I belong to this country now. I’ve been a working person, I’ve paid my taxes, and I’ve contributed to the community. I have been trying to become a legal resident since the very beginning.

Lion’s Roar: What does it feel like to be confined to one space?

Rosa Sabido: It has been strange in many ways. Yes, I’m confined to one space, but I believe real freedom is more than a physical space.

I want to be able to enjoy nature — the mountains, the rivers, and all that we are surrounded by. I miss the company of my pets. I used to take my parents to their medical appointments and help them with translating. My mom died two months ago. It was very hard for me not being with her and not taking care of her.

I haven’t been able to be free.

Lion’s Roar: Have you experienced moments of joy while in sanctuary?

Rosa Sabido: Many, many times. At the beginning, it was very surprising how people were coming in waves to offer their support and help. These people have become my friends and extended family. They trusted me without knowing me or my story.

Lion’s Roar: What does an average day look like for you?

Rosa Sabido: Every day is different. We do yoga, workouts, meditation, cooking, group meetings, church services, and there’s always someone coming to see me. Throughout the week, things are always happening spontaneously. It’s a busy life in sanctuary.

Lion’s Roar: Would you say that your Catholic religion has helped you during this time?

Rosa Sabido: My faith is my strength. It’s what keeps me hopeful. I believe that the future will be bright and beautiful, and it will be a victory in many ways. I’m not sure what the outcome to this situation will be, but my story has helped change peoples’ perception of the immigrant community. We’re more than what they say we are.

Lion’s Roar: How did you meet Joanie?

Rosa Sabido: Joanie showed up one day and offered to stay the night. We started talking and I told her many things about my life and my story. She is here to support, not question.

Lion’s Roar: Joanie, how did you find out about Rosa’s situation and what prompted you to reach out?

Being involved in sanctuary as a Zen practitioner, I’ve seen how a lot of the sanctuary work happening across the country is pretty non-denominational. There are a lot of different groups showing up in a lot of different ways. My Buddhist meditation group now meets at the church every week with the minister. It’s just another good thing that has come about because of Rosa.

Lion’s Roar: How has Zen informed your desire to help in this way?

Joanie Trussel: After doing the Zen chaplaincy program at Upaya Zen Center, I became more aware of how important it is to be socially responsible. It became part of my Zen practice. This felt like where I wanted to be putting my energy. I wanted to support somebody who has been unfairly judged by our system.

Lion’s Roar: Do you two meditate together?

Rosa Sabido: At the beginning, I was joining their meditation group. Separately, I’ve been listening to guided meditations and music when I feel anxious. I stopped joining the meditation group because I needed the quiet break during the day, but Joanie and I always have very deep conversations. We talk about things that are meaningful for both of us.

Joanie Trussel: When Rosa and I talk about our different spiritual paths, one of the things that we both agree on is that our purpose here is bigger than us. There’s no difference between her Catholicism and my Buddhism in the way that we view what we’re doing in the world.

Lion’s Roar: What types of conversations do you have?

Joanie Trussel: Rosa and I have compassion for every other sentient being, which is one of the places that we connect a lot. We have respect and love for animals, trees, plants, and everything else out there. We’ve also had conversations about how important it is to know what we’re putting in our bodies because it changes how we see and feel the world.

Lion’s Roar: How do you cultivate peace day-to-day?

Rosa Sabido: It’s hard when you’re in this situation, because you don’t know what’s going to happen. I turn to my spirituality and I trust that things are going to be okay. I know that if I don’t keep that peace, I may get ill because bad emotions can make us sick.

I needed to surrender to my lack of control. Whatever I was attached to, I needed to release.

When we don’t have peace, it’s often fed by this sense of control and attachment. That’s one of the biggest lessons I’ve learned in sanctuary. I needed to surrender to my lack of control. Whatever I was attached to, I needed to release. When I see people come in here with bad energy, concerns, and worries, I see myself and I see how much we waste our time by feeding those emotions.

Lion’s Roar: In June, the church held an event on your one-year anniversary in sanctuary. What was that day like?

Rosa Sabido: The separation of families at the border was beginning at that time, and it made me think of how much my family has been separated as well. It doesn’t matter how old the child is, it hurts no matter what age. My mom wasn’t able to be here that day because she was sick, but there was a lot of love and support from the community.

We hold a vigil every hundred days that I’m in sanctuary, because we don’t want people to forget how much time has gone by. It’s also a reflection on all the support I’ve received during that time. Soon, we’ll hold another vigil to mark five-hundred days.

To learn more about Rosa’s story, you can visit RosaBelongsHere.org.