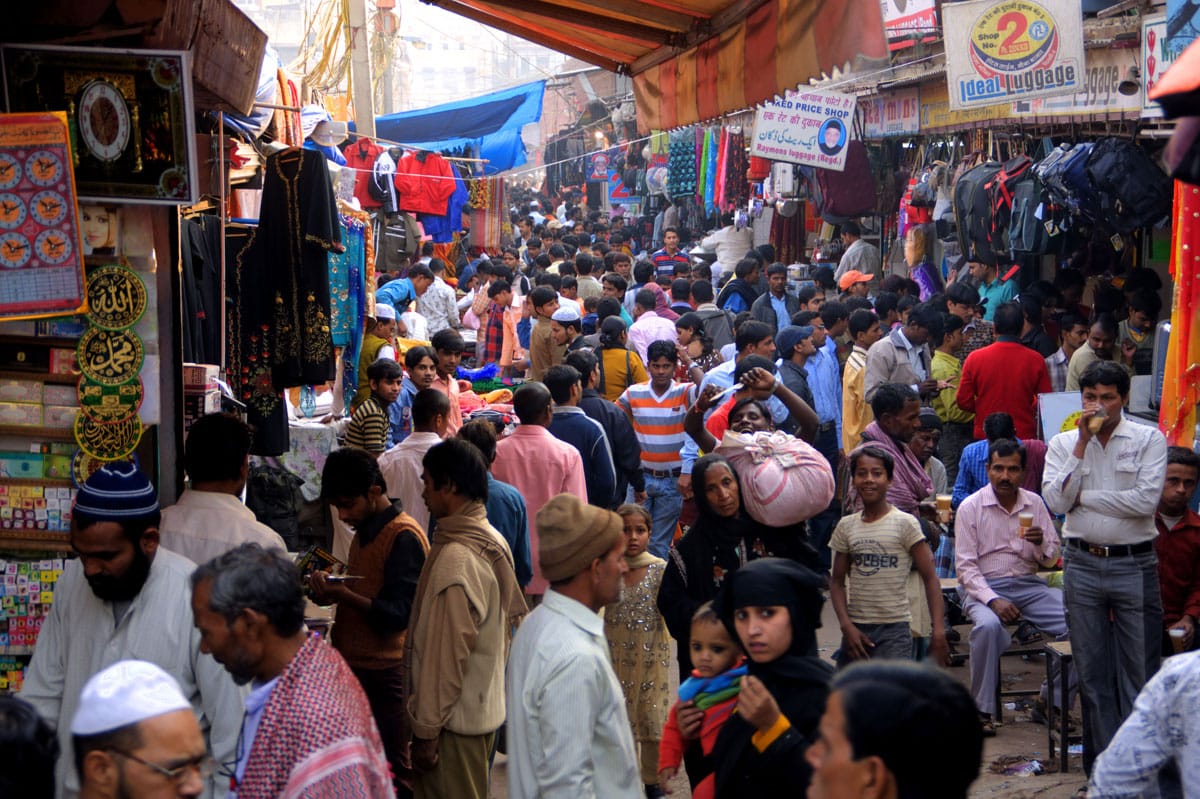 Shambhala Sun editor-in-chief Melvin McLeod has just returned from India, where he visited with the Dalai Lama for an exclusive interview that will be the centerpiece of our coming special publication in honor of His Holiness’s coming 80th birthday. (Click here to reserve your copy.) Here Melvin—no stranger to India—shares an episode from his trip.

I first went there in 1980, and thirty-five years later Old Delhi remains my favorite tourist place in the world. The noise, the crowds, the chaos, the color, the odd spaces, twisted warrens and weird fascinating buildings in every direction—it’s the most diverting, captivating place I’ve ever been.

Add to that the Red Fort at one end of Chandi Chwok (“Silver Street,” said to be at one point the richest street in the world), and the world’s largest mosque, the Jamid Masjid, plus random Sikh and Hindu temples, and sellers of all varieties of things, from silk saris to huge used electric motors, and every moment you stroll down Chandi Chowk and into the back allies of Old Delhi is fascinating. But that wasn’t even my most interesting experience. That would be taking the Delhi subway.

So I left my hotel near the airport late this morning, and took the new subway from the station a couple of hundred yards away. It was clean, quiet, uncrowded, fast, and modern. Amazing! Then I transferred from the “airport express” to the regular system at the New Delhi station. Suddenly I was back in the India I knew best.

The real adventure took place on the return trip. After my always-captivating tour of Old Delhi I wended my way past infinite sellers of everything you can imagine on the pathway to the station. I’d made it down to the platform just as a train was leaving, so I figured I was good for the next one.

Was I fooling myself! The next train took about twenty minutes to come, and was totally packed. There was an instant push to get in as soon as the doors opened, as other passengers (far fewer) struggled to push their way out. Maybe five people in front of me got in. I was struggling to get a toehold but not succeeding. In the classic tradition of the Indian rail system, a security guard came and dragged people away (me included) who were trying but had no chance of getting in. Then he pushed the people inside as hard as he could—shouting all the time—to squeeze them in so the door could close. It was like trying to close the lid on an overstuffed suitcase.

I was still on the platform, but I was now standing first in line right where I knew the door on the next train would open. And another train came in only a few minutes. Surely it wouldn’t be as crowded. It was, but this time I got in—really, more pushed in by the people behind me while a few people flowed out by me in the other direction. Basically I was completely at the mercy of the crowd’s forces. It turned out that getting in was the easy part.

Once again, I had to go two stops, and I was completely jammed in on all sides. Fortunately I’m not claustrophobic, but there were moments when I was afraid I wasn’t going to be able to breathe. The other good thing is that everyone was pretty good-natured about it, joking and chatting. Of course, that was pretty much all young guys. I saw one woman on a seat, but otherwise I have no idea how women, old people, or families could do it. Do they just not use the subway?

As my station approached I tried to lay the ground for my exit, asking who in front of me was also getting off. The thing is that as soon as the doors open, the people outside start to push in (and of course there is no room). Meanwhile, the people trying to get out are pushing in the opposite direction. No one waits for them to get out. It’s like a big rugby scrum (fortunately a game I once played), but there are more players on the going-in team than the going-out team.

The door opened to my station, and the crowd outside started to push in. I only had to make it about three feet, but missed my chance to join the initial push out. Now I was the only person left trying to get out, with who-knows-how many people trying to push in. I reached out to try to get a hand on the door, and someone said, “Better hurry,” because when the doors closed I’d be stuck until the next station—if I could even get out then.

I’m a lot bigger than the average Indian, and I’ve played a lot of contact sports. It took every bit of my strength—and no consideration at all for the other passengers—to finally push my way that three feet. (I think I kind of crushed a guy on my left). Finally, I almost literally popped out into the station. In typical Indian fashion again, the people on the platform were highly appreciative and supportive of my performance. We shared mutual smiles about how ridiculous the whole system was. (But also how painfully uncomfortable, unpleasant, and stressful for those who must take it every day)

Now in the New Delhi station, I headed back to the luxury of the airport line. I passed a line of people waiting to go through security for the regular Delhi subway that wended its way through the station for maybe 150 meters. I felt sorry for them, true, but, much more I felt relief that my privileged life did not require me to wait in that line. I speculated how long it would take to get through. I couldn’t guess.

Then I was back in the cleanliness, quiet, and spaciousness of the airport subway, and now I’m in my nice room at the Holiday Inn thanking my stars for the accident of my birth that doesn’t require me to play rugby just to take a subway ride.