Nancy Chu reports on Rebecca Nie’s Heart Sutra in Sacred Futurism, an augmented reality installation of Buddhist art that uses unique GPU algorithms inspired by the complexity of life and our human experiences.

Video by Jiayue Ceculia Wu & Z.M. Nie. An excerpt of the final rendition of “Heart Sutra in Sacred Futurism.” Courtesy of the artist.

Heart Sutra in Sacred Futurism, an augmented reality installation of Buddhist art, debuted on October 10 at the Sankofa World Music Concert at Stanford University, an event co-sponsored by the Ho Center for Buddhist Studies. The installation, which was created by Stanford’s Buddhist chaplain-affiliate Rebecca Nie, is a futurist expression of the Heart Sutra, integrating chanting in Chinese, Korean, and Japanese. It was made in collaboration with the concert’s musical director Jiayue Cecilia Wu, an assistant professor at the University of Colorado’s College of Arts and Media, and featured musicians Scott L. Miller, Jane Rigler, and Chris Chafe. To prepare, the musicians rehearsed over several months through state-of-the-art network audio technologies, such as Jacktrip, to remotely compose, record, and produce the Heart Sutra music.

Rebecca Nie, who is also a video and algorithm artist, designed and developed unique GPU algorithms inspired by the complexity of life and our human experiences. She also made visual representations of Avalokiteshvara inspired by an early 12th century Bengali painting of the bodhisattva. 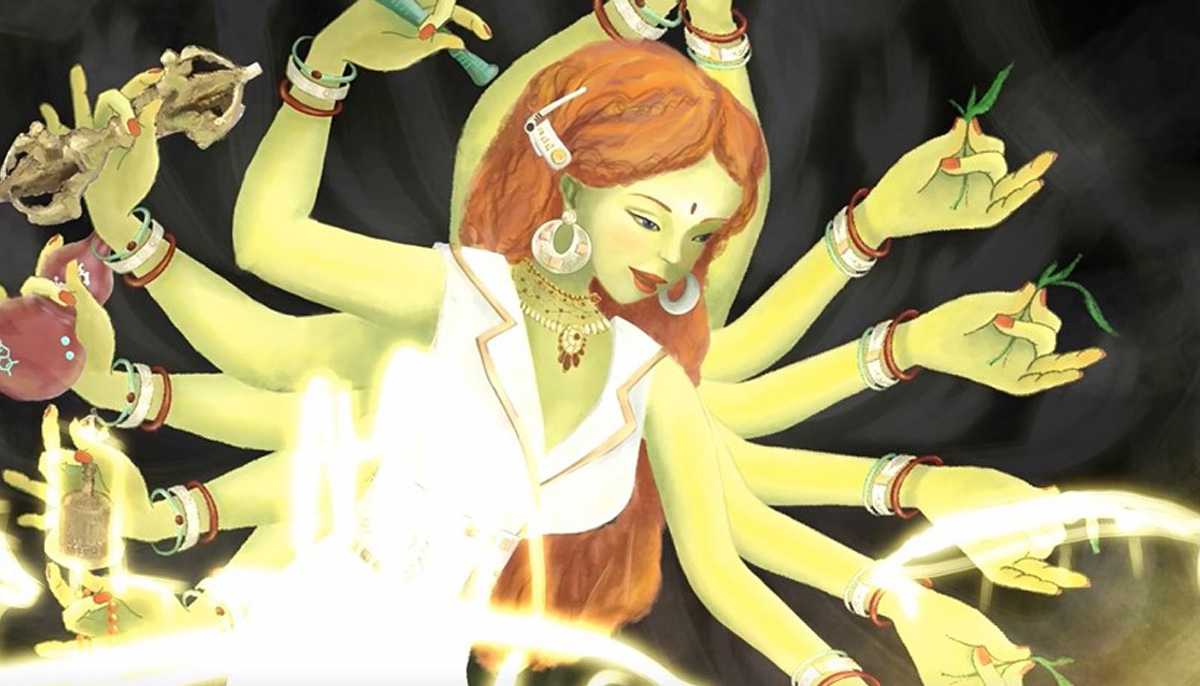 Image courtesy of the artist.

“Working with time-tested expressions of transcendental wisdom and universal compassion in this manner, we, as artists, hope to ignite the audience’s imagination to find a heartfelt sacredness that is intimately theirs and rooted in the increasingly technology-driven contemporary world,” Nie told Lion’s Roar.

According to the installation’s statement, Heart Sutra in Sacred Futurism draws upon the sacred expressive traditions in chanting, drumming, architecture, ink art, and figurative representations of the divine found throughout the Buddhist world. Meanwhile, the artists, who are classically trained in these traditions, intentionally transpose these time-tested expressions with algorithm-driven futurist visual dynamics and technology-packed acoustic techniques such as electronic music and surrounding sound.

The result of the multimedia collaboration is then video mapped onto Stanford University’s sacred historical monument, Memorial Church. Altogether, the augmented reality piece incorporates layers of complexity and symbolism. That is the message and metaphor of Sacred Futurism: we build a future not on an empty slate but by fully acknowledging the nuances of the past and carrying forward that which is life-giving.”

Rebecca Nie has a lifelong relationship to art. Her approach blends Western and contemporary influences with Eastern aesthetics and philosophy. Her studies in science (quantum optics and pure mathematics at the University of Toronto and applied physics at Stanford University) enable her to bring innovative technological approaches to her artistic creations. She is also an advisor to the Stanford Zen Society and a Zen master of the Korean Jogye order. For her, art and the Buddhist enlightenment experience are inseparable.

“When creating, I let go of my limited self to allow the lines, colors, and textures to come forth from a mystical center in my being, and I know that it is the space through which we are all connected,” said Nie.

“I trust this approach to express the universal awakened nature within every one of us.”