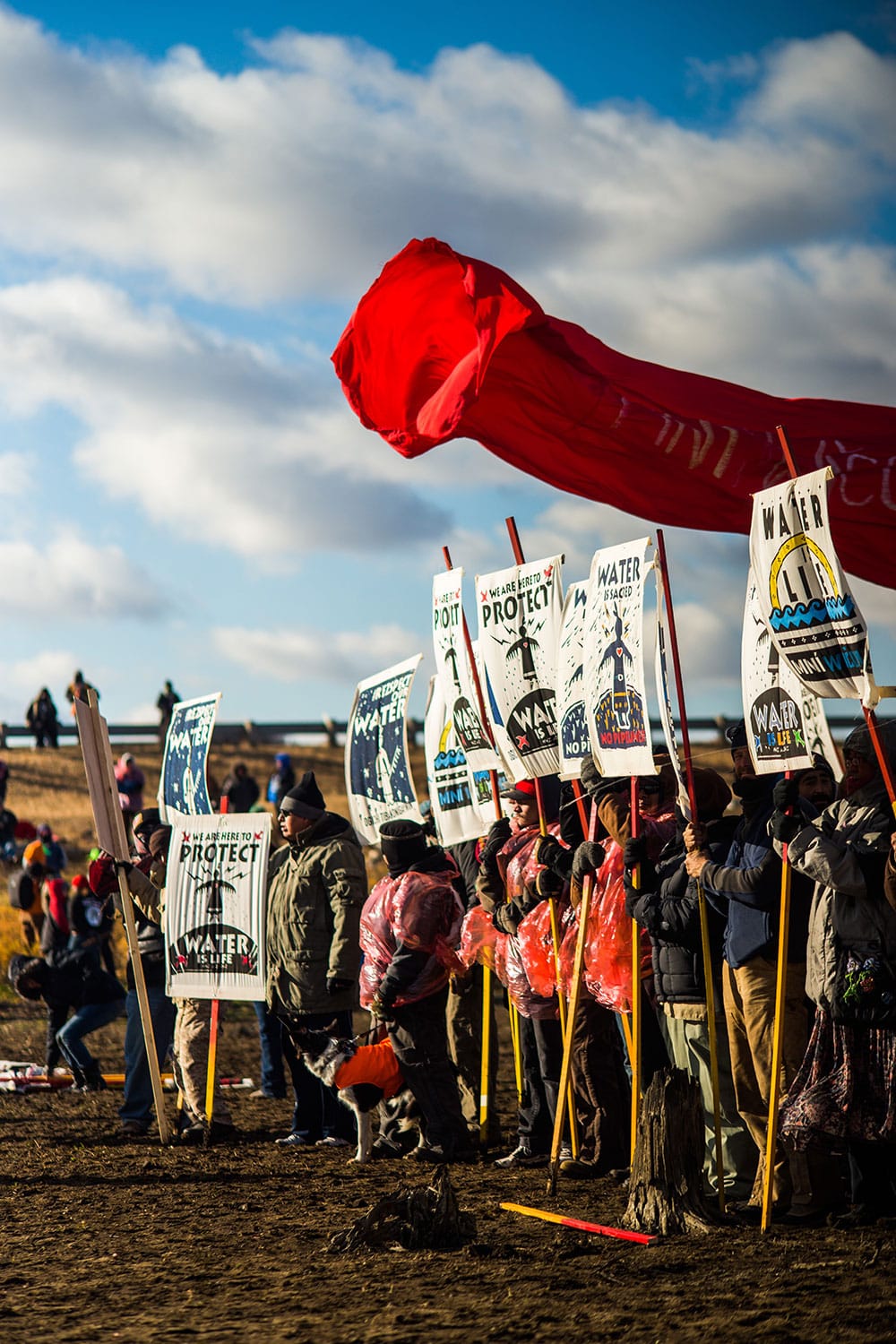 Protesters at the Oceti Sakowin camp at Standing Rock. Photo by Lucas Zhao.

Lion’s Roar spoke with Wendy Egyoku Nakao, abbot of the Zen Center of Los Angeles, about her work to thwart the Dakota Access Pipeline, in order to – as the Standing Rock Sioux Tribe and their allies have put it – “protect our water, our sacred places, and all living beings.” Following news of use of increased force against protestors at Standing Rock, her message is particularly urgent.

Thanks for talking to Lion’s Roar, Egyoku. I understand that you’ve been to Standing Rock not once, but twice. How long have you been involved, and how did that come to be?

Wendy Egyoku Nakao: In the summer of 2014, the Zen Peacemakers held a Native American Bearing Witness Retreat (NABW) in the Black Hills of South Dakota. It was held in a meadow in Santee Sioux land. During this retreat, several Native American Elders, mostly Lakota, spoke to us about their history and current situation. They asked us to listen to their stories and to participate in their ceremonies if we’re invited into them. There is a great suspicion of non-native peoples due to the genocide and breaking of all treaties by the U.S. government.

I have attended the Bearing Witness retreats at Auschwitz-Berkinau, which have been happening for twenty-one years now, and Rwanda for the twentieth anniversary of their genocide. The NABW was a first attempt to bear witness to the genocide in our own country. The effects of this retreat continue to resonate in many ways: a small retreat was held in the Cheyenne River reservations this summer, a Dakota Native American Bearing Witness is being held in Minnesota this month, winter clothing has been sent to Pine Ridge reservation, and visits to Standing Rock are ongoing.

I go to the Oceti Sakowin (OS) encampment to support a Native American friend who has her own camp within OS, to and to bear witness to their stand and the birthing and emergence of a new Native American nation. I have a deep resonance with the Native peoples and a vow to address the hard-wired instincts we seem to have to destroy the first peoples of this land. I also find that Native American spirituality is deeply resonant with the earth and, as a Zen Buddhist, I have come to live my life from a place of deep listening and ceremony/prayer.

Also, living at the Zen Center of Los Angeles, I have always been keenly aware of the people who lived here before us — the Tongva and Chumash tribes — and the need to honor them and their ancestors. These are people who were savagely enslaved and decimated to make room for the settlers.

Could you say more about how being in L.A. has honed that keen awareness?

I have always felt a unique “sense of place” in the city of Los Angeles. The little Zen mountain of ZCLA is a power spot; one can certainly feel the energy of the place just walking in. The roots of spiritual energy go deep. We are on sacred land of people going back thousands of years. I feel that the energy and voices of the Native Americans from all those generations past are continually speaking to us when we listen to the sense of this place.

What would you most like Lion’s Roar and Buddhadharma’s readers to know about the DAPL situation?

We need to understand that the Native American call to stand against the DAPL and to protect the water has had the effect of unifying the Native American tribes for the first time in recent memory. In addition, indigenous peoples throughout the world, and non-native allies, are being drawn to the energetic vortex of these encampments to offer support. The encampments are providing the context for inter-tribal healing, reclaiming of their cultural practices, renewing their ceremonies and prayer as a way of life and protest, and forging a viable identity as Native Americans. Essentially, the Native peoples are “decolonizing” by standing against their genocide and letting corporations and governments know that they have every right to exist and live on their land.

On your second trip to Standing Rock, you attended in your capacity as a priest, along with other clergy. What can you tell us about that gathering and the common ground that was (or was not) found there?

Rev. John Floberg, who has had twenty-five years of relationship with the Standing Rock Sioux through the Episcopal Church in North Dakota, issued a call for clergy to come “Stand with Standing Rock.” He’d hoped for 100, but in the end, over 500 clergy representing some fifteen denominations attended. The unifying factor was to stand with Standing Rock against the DAPL and for the protection of the water for all. I spotted at least seven Buddhist clergy there.

Rev. John laid out the agreement of the participants: Prayerful. Peaceful. Nonviolent. Lawful. We were asked not to engage in any violence and to treat law enforcement with respect. We were free to express our faith through our dress and speeches and to stand in solidarity with the Standing Rock Sioux nation.

One of the most important moments was the repudiation of the 15th-century Doctrine of Discovery by eight Christian Churches on the morning of the gathering. This doctrine, issued through Papal Bulls which are still on the books of the Catholic Church, sanctioned the domination and destruction of indigenous peoples by explorers and missionaries in the interests of the spreading of Christianity. The effects of this colonizing document reverberate in the world today through our laws and basic attitudes of racism. (In 2014 at the Zen Peacemaker retreat, Steve Newcomb, a Native American lawyer who has dedicated his life to having this document renounced, taught us about its pernicious effects.)

The ceremony for renouncing the document began with representatives from eight Christian churches, which had already repudiated the document, each taking turns reading a statement of renunciation in front of Tribal Elders. Then copies of the document were given to each Elder and subsequently burned. All clergy and people at the camp in attendance were witnesses, with Rev. Floberg stating that “We [the Protestant churches represented] were wrong” about the document. Very powerful.

Following the ceremony, each clergy member was smudged with sage and then joined a procession to the bridge where a violent confrontation between militarized police and unarmed Native Americans had taken place a week prior. The burned-out remains of trucks and tires littered the bridge. On the other side, were manned army tanks and sound cannons.

The gathering at the bridge was marked by short speeches by various clergy, and the singing of hymns. Police helicopters are in constant surveillance there, so it was hard to hear many of the speakers. Among the most moving speakers to me were an African American woman pastor and a Muslim American woman, who each spoke of how the doctrine of discovery has affected their people. Roshi Joe Bobrow said a few words at the gathering and led the crowd in a few lines of “Kwan Um Bosa.”

The day prior to the gathering, Rev. John had crossed the bridge, approached the police in tanks, and asked to speak with them. He told them about the upcoming clergy gathering and also explained the doctrine of discovery, which he told them was the reason the militarized units were on the bridge and the Native Americans were asking to be respected and heard.

After the gathering was over, several Christian clergy went to the capital of Bismarck with the intention of performing civil disobedience on behalf of stopping the pipeline. I think about 14 were arrested.

Are you heartened that President Obama is considering rerouting the DAPL?

No, because the violence continues with militarized police becoming more aggressive against unarmed protectors acting in prayer and ceremony, and pipeline construction continues night and day. President Obama needs to act now to stop the pipeline because the president-elect will likely not be so inclined.

I think we are heading for more confrontation in the days ahead. The First Nation peoples are taking a ceremonial and prayerful stand for healing from historical trauma and declaring their right to live on this earth. The DAPL folks have continued their actions, with the support of the Morton County law enforcement, regardless of injunctions, and are poised to go under the Missouri River. The mainstream media all but ignores what is happening. The current POTUS has been weak on the issue; the future POTUS is invested in Energy Transfer Partners. I encourage everyone to Stand with Standing Rock and protect the Water. Water is Life.