Shangpa Karmaling has had three suspected arson attempts in one month — the last of which destroyed the center’s main building. An anonymous letter writer has claimed responsibility for each fire and issued further threats. 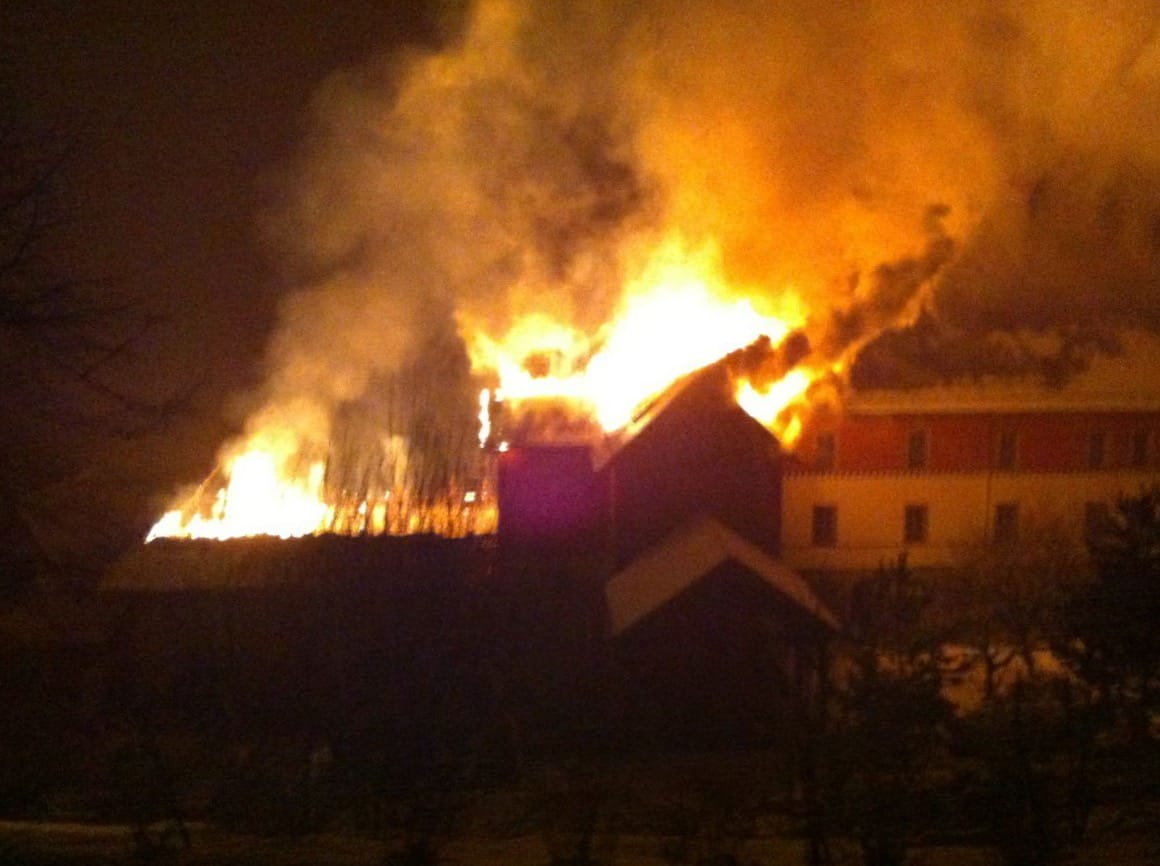 The fire blazing at the main building of Karma Shangpaling Institute, in the early morning of December 1. Photos courtesy of Shangpa Karmaling.

Community members at Shangpa Karmaling Institute, in France, believe that a fire that destroyed the main building of their center was caused by arson.

On December 1, a fire broke out at Shangpa Karmaling, destroying most of the institute’s main building — the Chartreuse — and leaving only the walls of the structure. The fire started around 1 a.m. at the southern end of the grand temple before spreading into the roof and through the rest of the building.

In a news release, members wrote that they received a letter on December 7 in which an anonymous author claimed responsibility for the fire and warned that residents should evacuate, or risk another attack. This was the third threatening letter community members received in under a month.

“They are very strange letters,” said Gil Mingyour, a lama at Shangpa Karmaling. “They sound paranoid. They say ‘If you don’t stop doing black magic, I will burn another building.’”

On November 17, a small fire started near a different building at Karmaling, but there was no serious damage. Following the incident, a letter arrived on November 23 claiming responsibility.

On November 28, a second fire attempt was foiled near the kitchen of the Chartreuse. This one started from outside against the building. A letter followed claiming responsibility on November 30. That same evening, just after midnight, the fire that destroyed the Chartreuse broke out.

An instructor was the first to notice the blaze after he saw an orange glow from his balcony and realized the main building was on fire. He rang the gong at the entrance of the grand temple and woke up the thirty residents. The fire department was called shortly thereafter. 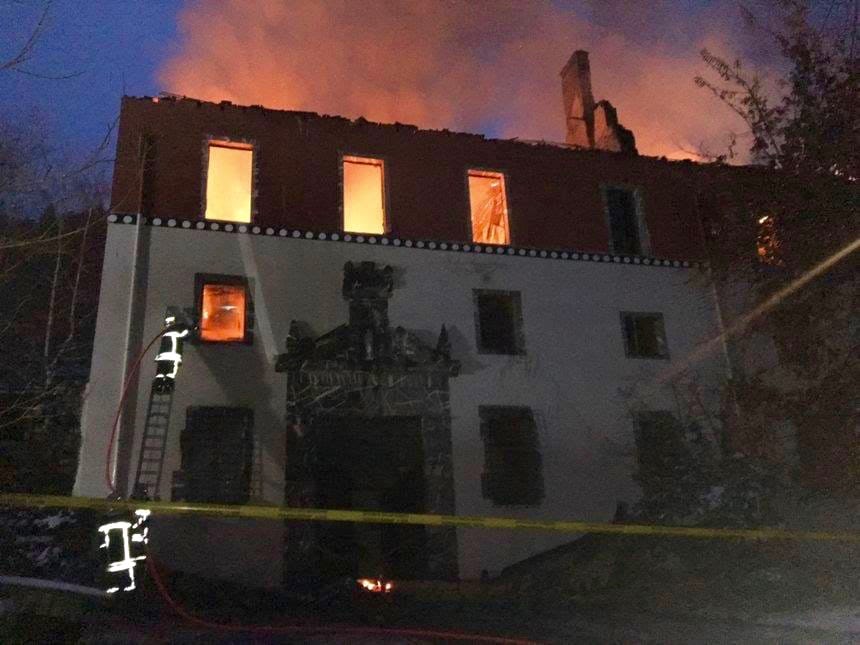 Firefighters fighting the fire in the main building at Shangpa Karmaling.

Forty-four firefighters worked for more than twelve hours until there were only a handful of localized fires left. By the morning of December 2, all of the fires had been extinguished.

Everyone who was at the institute for a one-time retreat has been evacuated, and those living onsite were offered possible relocation solutions. However, one of the retreat centers is still housing seven participants of a three-year retreat that started in 2015.

Currently, there are 15 people who have chosen to remain at Shangpa Karmaling Institute. A group of residents, lamas, and staff has organized night surveillance shifts between the hours of 8 p.m. and 6 a.m. There are also three security guards and a guard dog on site.

“There is a mixture of worry and sadness here, and we’re also a little bit tired,” Mingyour said. “But there is also a good spirit and encouragement. The morale is quite good.”

During the day, the group works to reorganize life at Karmaling by setting up new offices, restoring electricity, salting icy roads, and winterizing cottages.

The 400-year-old Chartreuse building was once a Christian monastery, the former Charterhouse of St. Hugon, and was considered the heart of Shangpa Karmaling. It housed three temples, two large halls used for programs, Tibetan scriptures, statues, books, texts, and much of the institute’s digital and paper files. 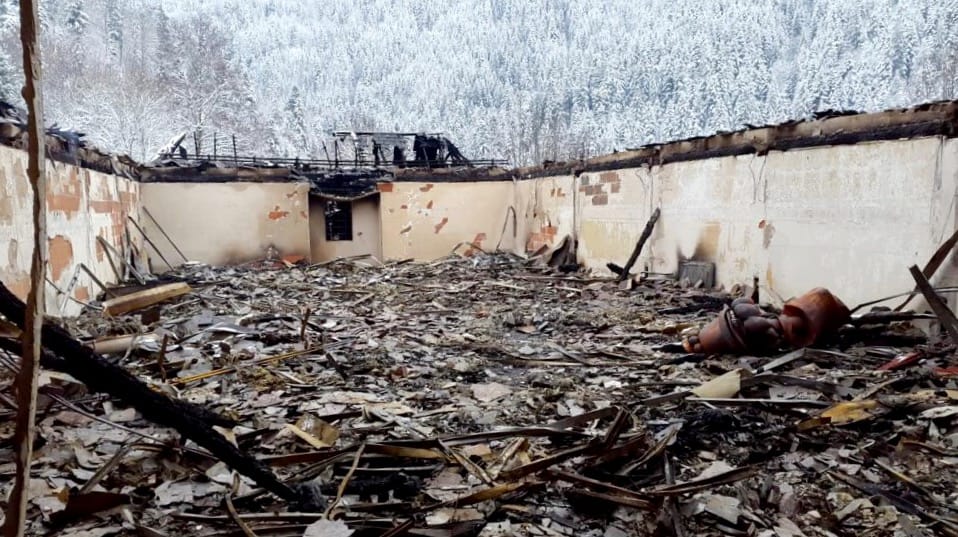 Community members say the fire may cause financial trouble, especially since the institute will lose the revenue from canceled winter programs. Temporary structures, such as tents, will have to be rented or bought for programs scheduled next summer.

Members hope reconstruction of the main building will begin in a few years. In the meantime, they say activities, retreats, and teachings will continue in some capacity. The other buildings at the institute — including the retreat centers and cottages — have not been damaged.

“Of course we thank everybody who has shown their solidarity. All of this is very much appreciated,” Mingyour said.

The community is grateful for the messages of sympathy they have received from people around the world who have offered to help with the reconstruction. Anyone who would like to make a donation to support Shangpa Karmaling can do so through unirimay.org, which includes updated posts about the aftermath of the fire and a video message from Lama Denys Rinpoche. 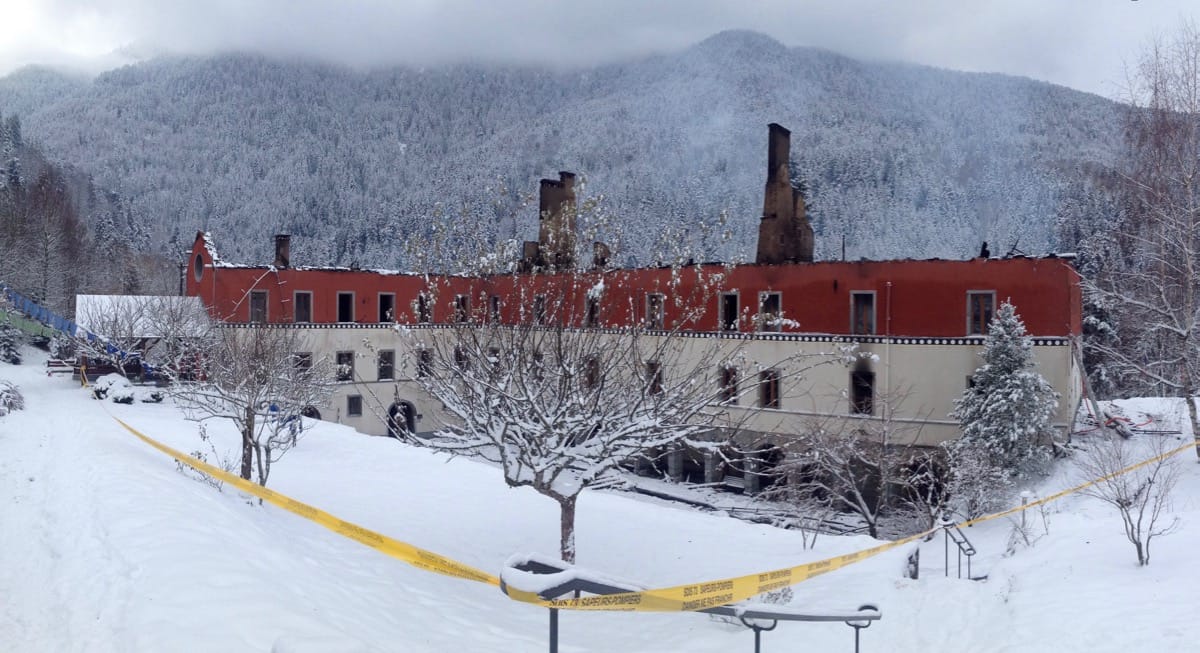 The main building at Shangpa Karmaling, gutted by the fire.

In a post on December 3, two days after the fire began, a community member wrote:

“This event reminds us of the reality of impermanence. It also reminds us of the values of friendship and solidarity that connect us and have manifested themselves with great focus in this very place. … Of course, the most important thing today is to maintain our spirit and motivation. If we approach it well, this event can be the occasion of a new start.”