Observers increasingly believe genocide could be taking place in Myanmar, a Buddhist-majority nation. 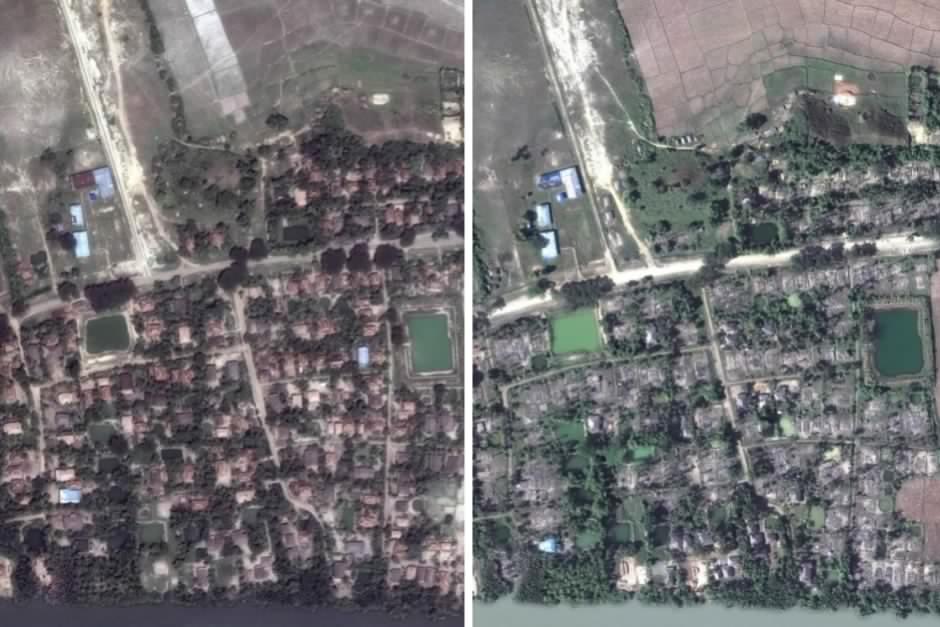 Satellite images showing the village before and after the massacre. Images by DigitalGlobe via AP.

On January 31, the Associated Press published a report confirming mass graves of Rohingya Muslims in Myanmar, including evidence of systematic executions and attempts to conceal the crime.

The AP’s Foster Klug wrote the report based on interviews with more than two dozen survivors who had fled to Bangladesh. From witness accounts and time-stamped cellphone videos, the AP discovered at least five mass graves in the Myanmar village of Gu Dar Pyin.

On August 27, witnesses told the AP that about 200 soldiers descended on the village. With help from Buddhist neighbors, the soldiers searched Muslim homes, loaded possessions in pushcarts, burnt buildings, and shot anyone who didn’t flee.

Myanmar has cut off access to Gu Dar Pyin, but satellite images from DigitalGlobe show a decimated village.

Almost all witnesses interviewed by the AP saw three mass graves at the northern entrance of Gu Dar Pyin. A handful of witnesses saw two other graves near a hillside cemetery and smaller graves scattered around the village.

Community leaders now living in refugee camps have compiled a list of 75 dead, but villagers estimate the toll could be as high as 400 based on the number of bodies seen in graves and around the village.

The AP obtained cellphone footage from villager Mohammad Karim, 26, which was taken on September 9, fourteen days after the massacre. According to the AP, the footage reportedly shows “blue-green puddles of acid sludge” surrounding corpses that “jut out from the earth.” Villagers reported seeing soldiers at a nearby market, two days before the attack, buying large containers of acid.

“[The] pre-planning aspect of this would be consistent with what we found in other places,” Matthew Smith from the aid group Fortify Rights told NPR.

NPR reports that Fortify Rights has documented mass graves in Rakhine since 2016. While they hadn’t documented the use of acid to dissolve and disfigure bodies, evidence has been collected of soldiers cutting and burning bodies.

Evidence of the graves reinforces previous charges by the United Nations and the U.S. of ethnic cleansing in Rakhine state. U.N. spokesperson Stéphane Dujarric said the report is “extremely troubling,” while U.S. spokesperson Heather Nauert said the State Department was “deeply, deeply troubled by these reports of mass graves.”

The graves are evidence of what commenters — including the UN high commissioner for human rights, the prime minister of Malaysia, and Bangladesh’s foreign minister — have said could be a genocide against the Rohingya people.

The AP contacted local officials in Myanmar, but they claim to know nothing of the attack. Myanmar’s military — led by chief Min Aung Hlaing — has repeatedly denied organized campaigns against the Rohingya.

Aung San Suu Kyi — the state counselor of Myanmar, who is Buddhist and a Nobel Peace Prize winner — has faced international scrutiny over ignoring such massacres carried out by the military.

On February 2, the Myanmar government’s information committee stated that 17 officials visited Gu Dar Pyin to investigate the AP report and were told by villagers that “no such things happened.”

Myanmar and Bangladesh have agreed on a two-year repatriation of Rohingya Muslims who have fled to Bangladesh. This agreement has been met with concern from aid groups and the refugees themselves.

In November, Amnesty International’s Director for Refugee and Migrant Rights, Charmain Mohamed, said she doubts that the Rohingyas will experience a safe or dignified return while “a system of apartheid remains” in Myanmar.

Since the military crackdown began in August, more than 688,000 Rohingya have fled Myanmar.

As a Muslim minority in the predominantly Buddhist country, the Rohingya people have long been persecuted. They are not considered one of Myanmar’s 135 official ethnic groups due to a citizenship law in 1982 that has left them effectively stateless.

In September, more than 200 Buddhist teachers and leaders signed a letter calling for Myanmar’s Buddhist leaders to end the Rohingya crisis.