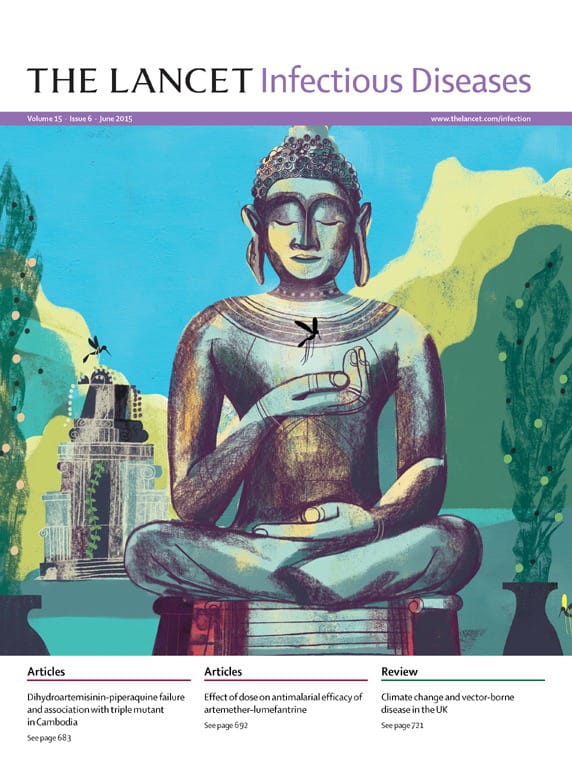 Explaining the retraction of this cover, Lancet Infectious Diseases editor John McConnell wrote, "we were not aware of any proscription against picturing statues of the Buddha." The cover was replaced with a more generic treatment.

Take a good, good look at that magazine cover. Are you offended?

No? Well, some people think you should be. What you’re looking at is the original June 2015 cover of the medical journal, The Lancet Infectious Diseases. I say “original” because, as Retraction Watch reports, the folks at The Lancet have retracted and replaced the cover after a minor outcry.

In an explanation, the journal’s editors write (in part):

The drawing depicts a feature typical of Cambodia, a statue of the Buddha, with the statue contemplating a mosquito, the insect vector of the malaria parasite. No other interaction between the statue and the mosquito is intended or illustrated. The cover artist modelled the drawing on photographs of Cambodian Buddha statues that are freely available on the internet.

At the time of publication, we were not aware of any proscription against picturing statues of the Buddha. However, given the complaints received, the illustration was taken down from the journal’s website on May 22.

As you might well have guessed given the semi-ubiquity of Buddhist imagery in Western media, this “proscription against picturing statues of the Buddha” that the Lancet‘s editors refer to is by no means a universal one. But in many parts of Southeast Asia, for example, it’s quite strong. Perhaps you heard, for example, about the three men who in March were jailed in Burma for daring to publish a photo, online, of the Buddha wearing headphones? It might sound like an Onion headline to you and me; to those three men it sounds like an honest-to-goodness two-year prison term.

Granted, many of these kinds of differences are cultural, and it’s not some automatically bad thing to be culturally sensitive.

It is, however, most definitely a bad thing to be culturally over-sensitive — which seems like a fine way to characterize Arjuna P R Aluwihare, one of the people who wrote in protest to The Lancet over their non-offensive and clever (if you ask me) use of a Buddha statue on their cover.

I am a Christian living and working in Sri Lanka and was shocked to see that an image of the Buddha was used on the cover of the June issue of The Lancet Infectious Diseases. Generally, depiction of the Buddha statue is frowned upon in Sri Lanka unless in a Buddhist context. Thus your use as a cover illustration is not forbidden, but displays a lack of sense and sensibility, with which I have associated the Lancet journals in the past. This incident bears similarities to the French magazine Charlie Hebdo’s publication of images of the Prophet Muhammad, and the ridiculous and insulting competition held in Texas, USA, that encouraged people to draw anti-Islamic pictures.

Now are you offended? I am.

To start with: how anyone could compare The Lancet Infectious Diseases to Charlie Hebdo is beyond me. Clearly the intention here was not to mock, to provoke, or even to comment on a religion and its role in society; that the Lancet retracted its cover (having never done so before) is testament to that. Also: it’s THE LANCET INFECTIOUS DISEASES, NOT CHARLIE HEBDO.

Nor does the publication of this cover amount to the equivalent of a competition “that encourages people to draw anti-Buddhist pictures.”

Surely the intention is self-evident, and surely intention must count for something.

So the Lancet staff committed a somewhat culturally insensitive boo-boo. At least they won’t have to go to prison. But how about letting them off the hook entirely?

We can still be critical when it’s helpful to be. For example, a more helpful message to the Lancet could have simply read:

Generally, depiction of the Buddha statue is frowned upon in Sri Lanka unless in a Buddhist context. Certainly you were unaware of this when you chose to run it on your cover, but I thought you might like to know. Keep up your good work.

I bet an approach like that would have been appreciated and taken to heart.

Or, we can simply follow Aluwihare’s lead, indulging cultural oversensitivities, flying off the handle when someone criticizes Buddhism, or somehow “gets it wrong,” or even innocently appears to be doing one of those things. But you know where that’ll get you, don’t you?

It’ll get you on the cover of Charlie Hebdo.