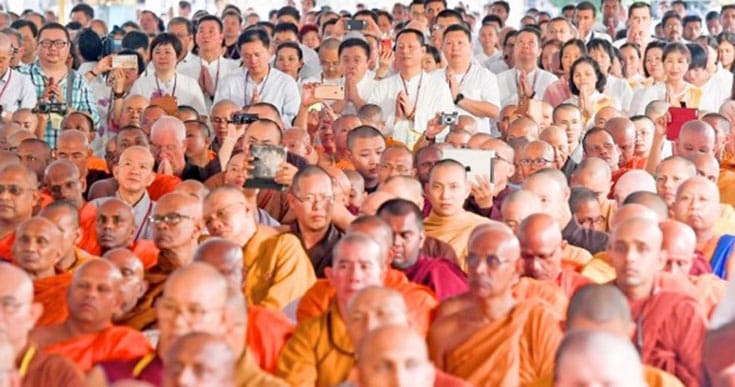 “As Buddhists, we know that the solutions for the social, economic, political, and cultural issues arisen both nationally and internationally are in the Buddhist philosophy,” said President Sirisena in his opening address. He also addressed the debilitating caste system still prevalent in some South Asian countries.

Modi offered the Buddha’s teaching as the best solution for creating peace: “The biggest challenge to sustainable world peace today is not necessarily from conflict between the nation states. It is from the mindsets, thought streams, entities, and instruments rooted in the idea of hate and violence. The menace of terrorism in our region is a clear manifestation of this destructive emotion.

“I believe that Buddhism’s message of peace is the answer to the growing arc of violence all over the world,” he said.

About Vesak itself Modi said, “The world also owes a debt of gratitude to Sri Lanka for preserving some of the most important elements of the Buddhist heritage. Vesak is an occasion for us to celebrate the unbroken shared heritage of Buddhism. A heritage that connects our societies across generations and through centuries.”

In the closing ceremony, Bidhya Devi Bhandari, president of Nepal, said that “Buddha is the light of the world. We should practice his teachings to create a better world.” She also outlined plans for the continued development of Lumbini, a World Heritage Site. 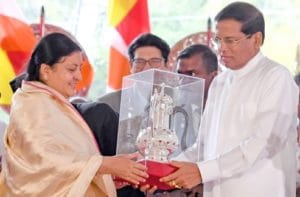 At closing of the celebrations, the UN Vesak Day Council agreed to begin work to establish an international platform to enable Buddhists to coordinate their activities, promote links between Buddhism and sustainable development, promote interreligious harmony, and address the dangers of materialism, weapons of mass destruction, and drug addiction and abuse.

Don de Silva is a Buddhist Chaplain, environmentalist, and formerly an official of the United Nations Environment Programme (UNEP).