Aung San Suu Kyi and her government have begun to address Buddhist-led violence against Muslims after many months of silence. 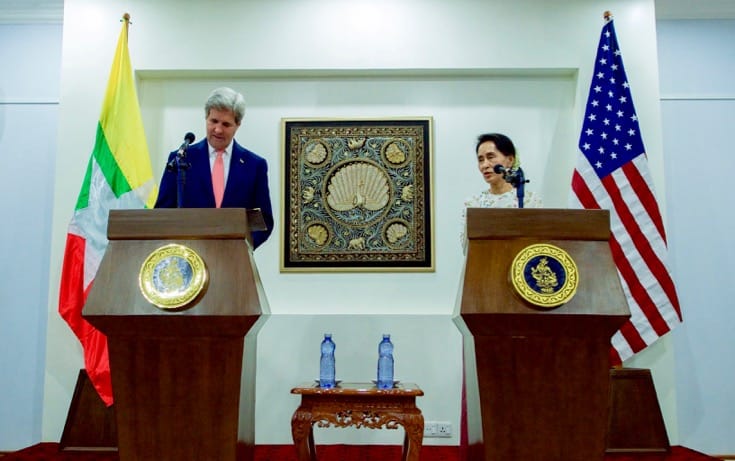 On the 100th day of her leadership of Myanmar, Aung San Suu Kyi made her first move against the oppression of Myanmar’s Rohingya people, the ethnic group that the the EU and the UN have described as the “most persecuted minority in the world.”

As announced on July 15, Suu Kyi created a task force to prevent religious violence. Specifically, the government threatened legal action against Ma Ba Tha, an organization of nationalist Buddhists headed up by the monk Wirathu, whom Time magazine dubbed “the face of Buddhist terror.” The government also stood by a member of the ruling party when he openly criticized Ma Ba Tha, prompting furious outcry.

Wirathu has gained worldwide notoriety for inciting violence against Muslims, slandering a UN human-rights envoy, and lobbying for a series of oppressive, anti-Muslim laws passed by the previous government last year. Ma Ba Tha made headlines again this year when its members expressed support for Donald Trump, saying “he understands the danger posed by Muslims.”

Suu Kyi’s moderate move comes after a year of pointed criticism for having largely ignored the suffering of Myanmar’s Muslims, more than one million of whom belong to the Rohingya ethnic group. Last year thousands of Rohingya people tried to escape persecution in Myanmar by boat, becoming stranded at sea. As the crisis unfolded, Suu Kyi was notably silent. In the run-up to the presidential election, Suu Kyi banned Muslims from running for her party. For the first time in recent years, there are now no elected Muslim politicians in the country.

Suu Kyi won that election by a landslide victory. Though Myanmar’s constitution bans her from becoming president, in April she created a position “above the president” for herself, called “State Counsellor,” and now serves as the de facto leader of the country. She previously won the 1990 presidential election, but the results were thrown out and she was placed under house arrest. She won the 1991 Nobel Peace Prize for her campaign for democracy.

Suu Kyi’s win seemed to be a positive signal for the Rohingya. In March, at least 25,000 Rohingya Muslims returned from displacement camps to their original communities, hopeful the new government would alleviate the persecution. That thought may have been premature.

In May, Suu Kyi asked politicians around the world to stop using the term “Rohingya,” for fear of inflaming violence, a request U.S. Secretary of State John Kerry refused to heed. Suu Kyi also asked Kerry, as well as E.U. leaders, for “space” to deal with human rights abuses. Her minister for religion, Thura Aung Ko, called Muslims and Hindus “associate citizens.”

In June, the United Nations high commissioner for human rights, Zeid Ra’ad Al Hussein, released a report on the Rohingya crisis. The report described executions and torture, and stated for the first time that the government’s abuses may constitute crimes against humanity. Many others have asserted the abuses amount to genocide.

A release from the high commissioner’s office said:

“The Rohingya are suffering from arbitrary deprivation of nationality, severe restrictions on freedom of movement, threats to life and security, denial of rights to health and education, forced labor, sexual violence, and limitations to their political rights, among other violations… some 120,000 Rohingya and Kaman Muslims are still living in camps for internally displaced people. There has also been an alarming increase in incitement to hatred and religious intolerance by ultra-nationalist Buddhist organisations…”

The Rohingya will reportedly be excluded from upcoming peace talks with indigenous groups, organized by the government.

Suu Kyi’s silence on the crisis prompted outcry from leaders around the world. The Dalai Lama spoke out multiple times, most recently saying “morally she should … make efforts to reduce this tension between the Buddhist community and Muslim community.” Suu Kyi responded by saying that the situation is “really complicated.”

In recent months, attacks against the Rohingya have continued, with at least two mobs burning down mosques and attacking Muslims.

It was these most recent attacks that prompted Myanmar’s official Buddhist organization, the Sangha Council, to denounce Ma Ba Tha in July. Win Htein, a spokesman for the government, said, “[Ma Ba Tha] was never recognised as a real Buddhist organisation… Now the Sangha Council finally has to denounce them because they have become uncontrollable.”

The Sangha Council’s actions have led in turn to the government’s decision to crack down.

In typical fashion, Wirathu responded, calling Suu Kyi a dictator. He also lashed out once again at the U.N. human-rights envoy, threatening to beat her with a “wooden flip flop” if she “wasn’t smart enough.”

As Suu Kyi has appeared inactive while the Rohingya crisis has only worsened, one Muslim peace activist said the government’s latest actions are too little, too late. Only time will tell whether Suu Kyi, a beacon of democracy who aspires to bring metta (loving-kindness) into politics, will live up to her own standard.

Buddhists Betray the Teachings: Jack Kornfield on the anti-Muslim violence in Myanmar