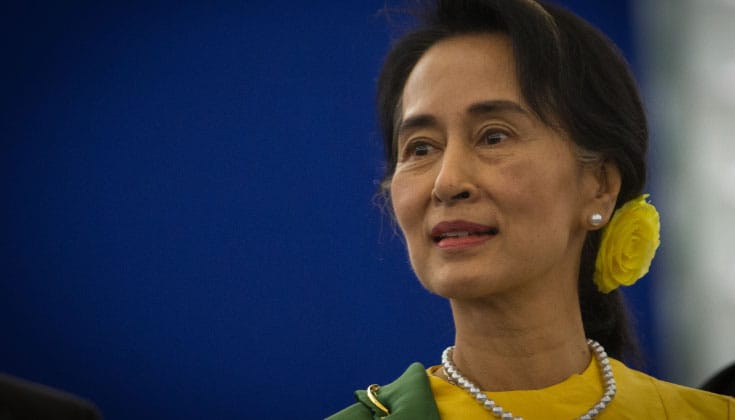 Almost 20 years ago, in the Shambhala Sun, Alan Clements wrote of Aung San Suu Kyi and her campaign for democracy, “she will not be stopped.” Now, Aung San Suu Kyi’s political party, the National League For Democracy (NLD), has reportedly swept the polls in the Burmese election. While the results have not yet been officially announced, both Aung San Suu Kyi and incumbent President Thein Sein have declared the NLD the winners.

This is the second time Suu Kyi’s party has won a general election. The first time, in 1990, the results were nullified and Suu Kyi was placed under house arrest. She received the Nobel Peace Prize the following year for her nonviolent campaign for democracy.

Due to a clause in the constitution, Suu Kyi cannot become president. However, last week she said that if she won she would appoint a president who will serve under her direction.

While Suu Kyi was once an iconic figure of non-violence and democracy, in recent years her reputation as such has come into question due to her stance on the rights and protection of the country’s persecuted Muslim minority. During the campaign, Aung San Suu Kyi did not speak out forcefully against anti-Muslim violence. Her silence may have been out of fear of alienating the powerful Buddhist group MaBaTha. In May, as thousands of displaced Rohingya migrants floated at sea, Suu Kyi’s silence on the issue prompted the Dalai Lama to urge her to take a stand.

In an interview we published in 1997, Aung San Suu Kyi was asked whether being a devout Buddhist was incompatible with being a political leader. She replied, “I do not see a dilemma. My first concern is to abide by Buddhist principles in my worldly dealings.” Suu Kyi went on to say that she doesn’t think it is necessary to separate political and spiritual matters, an issue that has become a critical point in Burmese politics. She also said that metta — the Buddhist idea of loving-kindness — can be practically integrated into politics.

Over the course of nine months-from October, 1995 to June, 1996-I had an exceptional series of conversations with a unique woman and, currently, the world’s most famous political dissident. Burma’s Aung San Suu Kyi is, in the words of Vaclav Havel, one of the outstanding examples of the power of the powerless.