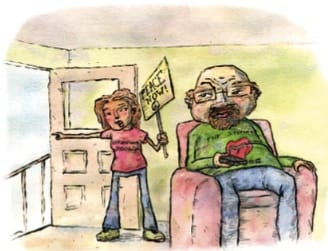 It’s time to stop feeling so down on yourselves — you’ve accomplished a lot. But there are still battles to be fought. Gen-Xer Rod Meade Sperry gives the baby boomers a friendly talking-to.

People can be so hard on you baby boomers. Not least of all, yourselves.

Back in the days when the comedian George Carlin was soft-spoken and long-haired, he was one of your strongest representative voices, the perfect boomer ambassador. In his later years, George took to saying—actually, yelling—that no generation in history has ever sold out like his has. And it seems few would disagree. Think back: you applauded when the young Jerry Rubin was an upstart Yippie throwing cash onto the floor of the New York Stock Exchange. Years later, when he returned to Wall Street as a high-powered venture capitalist and market analyst, where was the outrage?

It was with your kids. We were aghast. This was against everything we were told you people stood for.

Whatever. The fact remains that Jerry Rubin changed the world. And not just once, but twice: many of you followed him right into Big Money Land. But maybe that’s OK. Maybe the We Generation collectively earned itself a little Me-Time.

Only now you’re a target market. And believe us, we know: it sucks. First, you’re labeled—which is never pleasant—and then the advertising agencies get to work playing on your sympathies.

But wait. Stop a second, and look at where your deepest sympathies lie: human rights, grimy, days-long music festivals, family, safety, education, peace. Those are nothing to be ashamed of, you know.

On the other hand, just look at how your kids (and theirs!) are being marketed to. Of course, half the time, it’s breasts and bling and celebrities and X-treme-this and hootchie-mama-that. It can be downright embarrassing. The other half of the time, though, the media seems to know that we post-boomers are smarter than all that, that we have what appears to be some kind of shared awareness of what really matters. We’re through with racism. We’re tired of hunger and war and intolerance. And so the media reacts by appealing to the boomers inside us. They’ve done their research, and they know: we go to our own grimy music festivals. We wear our silicone charity bracelets. We meditate and do yoga and participate in book clubs and volunteer our time. We work for peace. We care about the Earth. Just like many of you did, and just like many of you keep doing. We learned it from you.

Regarding the boomer’s oft-resurfacing sense of responsibility and guilt: it’s admirable, but it’s also off the mark. Fact is, very few of you were as radical as we’ve all been led to believe. The real story is that the counterculture of your generation was hijacked by the young admen of the late ’60s and ’70s, whose business it was to know a good thing when they saw it. And so they adopted the visual and verbal vocabularies of the anti-establishment for themselves and their purposes, and proceeded to cram them into every ad they could. Why? Because it rang true for them as creatives, yes, but also because it sold stuff—even in the heartland, where your movement found little other favor. (Read Thomas Frank’s excellent The Conquest of Cool: Business Culture, Counterculture, and the Rise of Hip Consumerism for a full debriefing.) The idea that all boomers were idealistic and committed to the betterment of society was, and is, bunk.

Still, a good number of you were deeply involved in the real revolution. You taught America about equal rights and civil rights. You fought an unjust war and, in ways, won. And you were part of one of the ultimate happenings: you tilled the soil so that dharma might take root in the West. You populated our first practice centers, you welcomed Buddhist teachers from Asia, you translated their words, and you made those words your own as practitioners and even teachers yourselves. You changed the world.

Perhaps it’s these successes, ironically or not, that have given you the wealth, opportunity, and demographic appeal you collectively enjoy today. Let’s face it: boomers have clearly proven themselves forces to be reckoned with. So it might be worth considering that the thirty-year-old marketing brainiacs of today might not be merely trying to manipulate you, but are instead trying to speak your language. After all, to address you in the same way they address us half the time would almost certainly be insulting. There’s no doubt it would be bad business. But whatever their motivations, remember: falling for a well-crafted pitch doesn’t make you a sellout; it makes you human. Maybe you should even feel a little flattered that your values have made such an impression.

If you’re reading this now, odds are you’re still engaged in peacework and positivity. But if you feel like a sellout or a has-been sometimes, stop and take stock of how the world has changed since you’ve been on the planet. Compassion is an everyday word these days. Environmental responsibility is not just a dream but a legal principle. And we’d like to think you’ve turned out some pretty excellent kids. In fact, it might just be that no generation, even ours, has ever done more to make a better world. And you made it, pretty much, out of whole cloth.

If that’s not enough for you, fine: no one’s gonna stop you from jumping back into the fray with us and getting more work done. You might be aging, but you’re not dead. And what’s more, you’ve got money, you’ve got influence, you’ve got power, and we know you’ve got soul. So if old Jerry Rubin was able to change the world twice, we see no reason you can’t one-up him and go for three. All we ask is that you take a little pride if we go for four or five, knowing that we learned how to do it from you.

Oh, and also this: enjoy life to the fullest. We’d like to be able to learn that from you, too.

An excerpt of this piece appears in our July 2009 “For 30 Years the Best of Buddhism in America: Commentary” retrospective. Here, we present the piece in its entirety.