Recently, the BBC profiled what it termed “Taiwan’s new-age Buddhists.” The piece documented a trend, on the island, away from devotional visits to the temples to improve one’s lot in this life and the next, and toward charitable works. 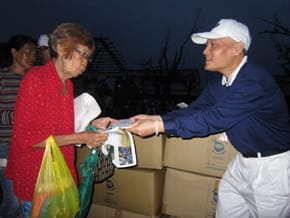 “The focus now is on what the Taiwanese call ‘humanistic Buddhism’ — caring for others and for society. It returns Buddhists to the core principles of Buddhism — speaking good words, thinking good thoughts and doing good deeds.”

The piece notes the influence of some Christian methodologies but cites native organizations such as Tzu Chi Foundation (known worldwide now for the disaster-relief efforts of its 7 million members), Fo Guang Shan, and Dharma Drum Mountain as tapping into a newly wealthy middle class and leading the way. Such a shift in emphasis has led to phenomenal growth in these organizations, and the BBC says their influence is now being felt in mainland China.

“Scholars believe Taiwan is playing a key role because many charismatic Buddhist leaders fled to the island after the Communists took over the mainland in 1949. Influenced by the respected late Buddhist leader Taixu’s calls for contributing to society to gain enlightenment, the masters and their disciples made the idea a reality.”