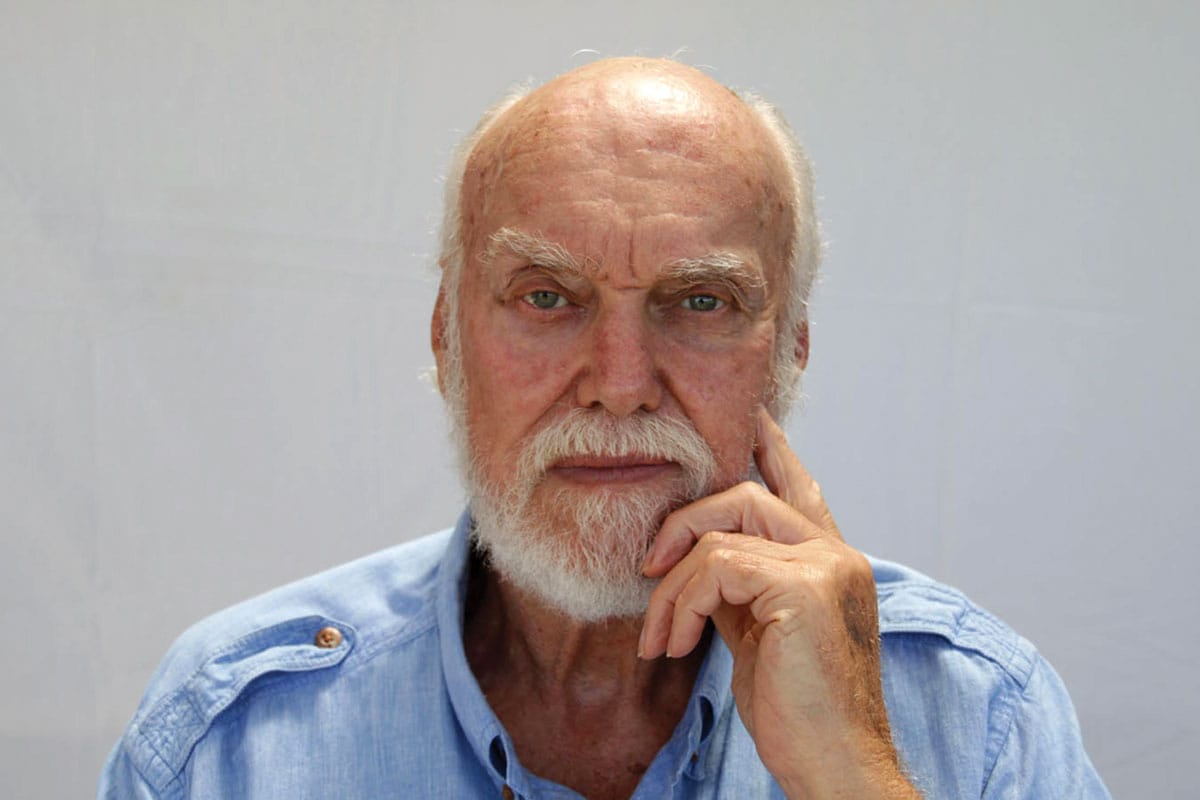 When Lion Roar’s editor-in-chief Melvin McLeod mentioned to me that he had been picked up hitchhiking by Ram Dass in 1973, I began to feel I was unqualified to do this interview. I wasn’t alive in ’73 when Ram Dass was driving around Vermont in a hippy van with images of Indian gods and gurus on the dashboard, and I certainly wasn’t alive in ’71 when his landmark book, Be Here Now, was published. But qualified or not, I wanted to do this interview. Ram Dass, born Richard Alpert, helped to shape a whole generation. He was a respected psychologist who, with his Harvard colleague Timothy Leary, became a psychedelic pioneer. Then, after Harvard saw fit to fire him for his drug experiments, he went India where he met and became a devotee of Hindu guru Neem Karoli Baba. Now, more than forty years later, Ram Dass is still on the same spiritual path and, he tells me, still growing spiritually. These days, due to the stroke he suffered in 1997, he speaks slowly and sometimes can’t find a word he’s looking for, but he remains articulate and his smile remains radiant. Our conversation was in honor of Ram Dass’s book, Be Love Now. –Andrea Miller

How are you feeling?

Good to hear. But you’ve had some serious health problems. Have they aided or impeded your spiritual growth?

I think aging minimizes my desires, so that makes it easier to work on spirit. In total, I’d say that my health problems have helped me. Now that I’m aging I’m very content, and contentment means good food for spiritual growth.

Why has service been an important part of your path?

Because of my guru. We worship Hanuman. Hanuman is a monkey, and he worships the diety Ram. Hanuman loves Ram only, and all he wants to do is serve Ram. My name is Ram Dass, meaning “Ram’s servant.” So, service is my path. You serve with love everybody you can find. You feed them, nurture them, and do service. Service is a part of bhakti yoga.

How would you define bhakti yoga?

It sounds so simple to love yet it’s not. Why is it so difficult to be truly loving?

Because we are mind people and you can’t love through the mind. The ego can’t love—it’s too anxious. We try very hard to love with our minds, but we can’t do it. That’s what our problem is.

Do you have any tips for making it easier to tap into love?

You can have my guru. He’s up for grabs, and he’ll love you until you bust.

In your book Be Love Now you talk about faith and grace. How do you define these words?

Faith is not belief. Belief is up here [taps temple], and faith is down here [taps heart]. Faith means you let other planes of consciousness in, for example, serendipity or things in your life that are not rational. You say, Come on, come on. Grace is lubricating the well, the way. It’s the way in which my guru, or God, makes my life graceful. It’s light hearted. My life was full of grace, and then I had the stroke, and all the people around me were like, “Tch, tch, tch, terrible, terrible, terrible.” And I started to feel maybe it was terrible. But I talked to my guru inside, and I saw that it was grace. The stroke wasn’t grace—the stroke was from nature—but the way I take it is grace.

You did a lot to shape the sixties and seventies. Where do you think the boomer/hippie legacy stands now?

We added things to the culture. We added a lightness, and a playfulness, an inside-ness and spiritual-ness. I’m very happy we did all that. But then we made mistakes. The things we added were pushed in people’s faces, and the culture responded from the right. There was a pendulum swing. If we had been a little quieter about what we were doing, maybe it would have been different, but we didn’t want to be quiet. We didn’t want to be quiet about psychedelics, and we didn’t want to be quiet about the East and the powerful Eastern influence on our Western ways. Our legacy is not big, but it stands in the hearts of the people. It stands in our music.

Some people of my generation—Generation X—criticize Westerners who practice Eastern religions. They think it’s silly to look to Eastern philosophy, or to Eastern teachers, as being a font of wisdom that is superior to what we have here in the West. What do you think about that?

Eastern philosophy teaches us to go inward. In the West there’s a god with a beard. In the East there’s the god within, and the East meditates. Eastern cultures have always welcomed holy people, and we haven’t in the West. You can go to a village in India, and they’ll find you the holiest person they know. In our culture, it’s all about the wealthiest person you know, the best-looking person. It’s a different culture.

Recently here in the West, yoga, or rather the asana practice of hatha yoga, has become extremely popular. What are your thoughts about that?

I think that they miss the point of what yoga is about. They make it into body beautiful, and they make it worldly. Really, an asana is a conversation with god.

What are your thoughts about today’s young people?

They are texting and multi-tasking. Now and then I meet a high school or a college student. Their hearts are okay.

Do you have a message for the younger generations?

Thank you. Thank you very much for having this talk with me.