As a young, female Zen teacher, Gesshin Greenwood struggles to find the line between humility and self-criticism. 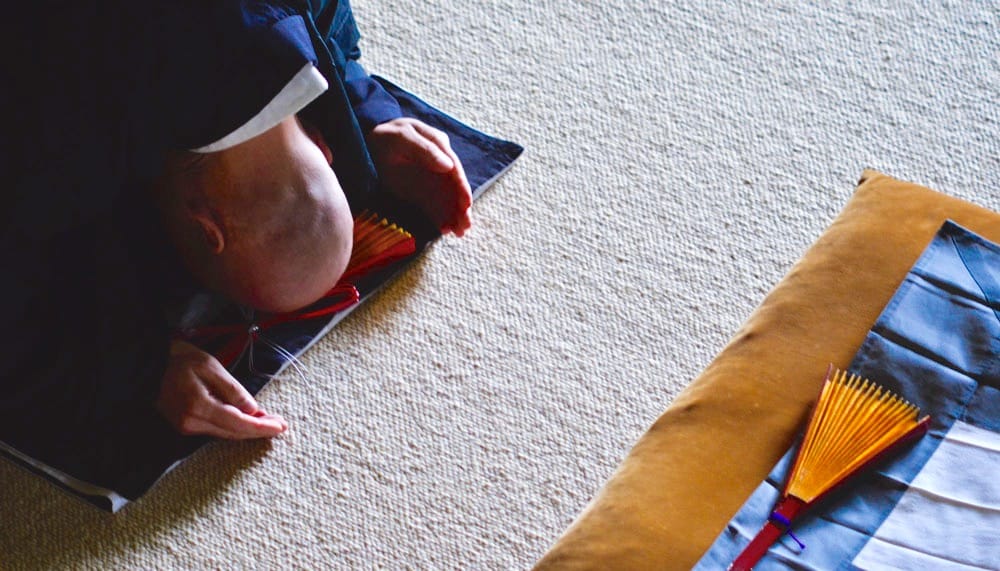 I received dharma transmission in my late twenties. By American standards, where dharma transmission is supposed to signify the maturity and ability to teach, this is laughably young. By Japanese standards, where sons of male priests are raised to take over the family temple and dharma transmission does not necessarily signify the ability to train others, this is right on schedule. Since returning to the United States from Japan, I have been grappling with what it means to be an authorized teacher at age thirty, when I still am unformed in many ways and very experienced in others. Suffice it to say I feel a lot of doubt and uncertainty about this role.

In the Zen tradition, there are countless stories of accomplished masters who choose to live in obscurity, avoiding students. For example, Zen master Daibai hides in the mountains, wearing lotus leaves for clothing and eating pine seeds. When a student finds him, he writes a poem that concludes, “Now my abode has been discovered by people in the world. / I shall move my shack deeper into seclusion.”

As a young, female Zen priest I am keenly aware of how self-doubt and wisdom can comingle.

It’s hard to know if what Zen master Daibai is demonstrating in his obscurity is wisdom or cowardice (or both). In some ways, it seems much easier to practice Zen when one is isolated on a mountain, without the obligations and challenges of being accountable to others. Teaching brings with it the threat of arrogance, egotism, and failure.

As a young, female Zen priest I am keenly aware of how self-doubt and wisdom can commingle. Training as a nun in a Japanese convent, I learned that my spiritual maturity was only as deep as my humility. I learned to not take credit for my accomplishments, to defer to seniors and elders, to distrust any desire for recognition, and to preserve a sense of continuous “beginners mind.” The woman who modeled this for me was an eighty-year-old female Zen master whom I respect greatly. Despite her renown as a wise, fierce, and accomplished abbess, she often told the nuns that she believed she was just beginning to learn about the Buddha-way. In fact, when pressed on the subject of “enlightenment,” she admitted she didn’t believe it was possible for one human being to approach something like realization of the entire universe. Far more important, for her, was continuous practice. And to make continuous practice possible, a humble beginner’s mind is crucial.

Humility is a value that exists in all sects of Buddhism across the world. However, I think in the West we have yet to really come to terms with how to enact humility in a healthy way. As women in this culture, especially, we are conditioned from a young age to be quiet, to defer our needs, to make ourselves small so that the men around us can feel important. This conditioning is combined with the explicit cultural value placed on self-actualization, career success, fame, leadership, and self-promotion. It is no surprise that when we experience career success, we instinctually feel we are somehow wrong and undeserving of success. Psychologists have identified this as “imposter syndrome”—the feeling that we do not belong in leadership positions or deserve material success.

How do we know when self-criticism and imposter syndrome are masquerading as beginner’s mind? What is humility in our practice, and what is self-flagellation? In the Zen lore, it is said that the Sixth Patriarch Huineng hid for ten years after he received dharma transmission. Sometimes I wonder if he was sitting in his room, looking in the mirror and feeling fat, and obsessively cataloging all the reasons he didn’t deserve to teach Buddhism. (Or is that just me?)

This May I am publishing my first book, Bow First, Ask Questions Later: Ordination, Love, and Monastic Zen in Japan. I started writing this book when I was twenty-seven years old, and it has taken me several years to complete and edit it. I have wanted to be a writer since I was a little girl, and have spent a considerable portion of my time and energy as an adult trying to improve my writing; I am proud of this book, and part of me wants to celebrate its publication. Recently I, have been daydreaming about a book launch. In my daydream, I imagine the book launch taking place in a beautiful building, with beautiful people who love me, and possibly champagne. I sit at a table, signing books, happy.

Every time I indulge this fantasy, however, a little voice inside me objects. “Who do you think you are?” the voice asks reproachfully. “Do you think you’re a character in a movie? Why do you think your book deserves that kind of reception?”

I have been meditating for long enough to recognize when a voice in my head is just a voice. In fact, my husband has named this voice in my head my “cruel brain.” “Who do you think you are?” this voice asks me whenever I desire recognition for my accomplishments.

Humility and self-flagellation are indeed two sides of the same coin. They are intimately close. On the flip side, of this critical voice one can find a meaningful question. The question “Who do you think you are?” can be a sign of self-hatred if the tone is particularly biting, but asked in a different register, this question opens possibilities. “Who are you?” is a question at the heart of Zen practice. When self-hatred sounds in our heads loud and clear, if we recognize it for what it is, we can transform the criticism into an opportunity for further insight. “Who do you think you are?” becomes “Who are you? What are your values? How do you want to be in the world? What is your contribution?”

How do we know when self-criticism and imposter syndrome are masquerading as beginner’s mind?

Feelings of unworthiness and self-criticism are closely connected to a wholesome impulse towards improvement, creativity, and steady motivation. Suzuki Roshi famously said, “In the mind of the beginner there are many possibilities; in the mind of the expert there are few.” True beginner’s mind is expansive. It allows for infinite possibilities. It gives us the energy and inspiration to ask for help, to seek teachers, to sit long retreats, to read books and study. Self-criticism, on the other hand (the voice inside us that says we are terrible spouses, terrible meditators, etc.) is narrow and heavy. It weighs us down and limits possibility. So although the words we use to criticize ourselves sound a bit like humility, the tone, feeling, and end result are quite different. If we catch the cruel voice in our head early enough, before it has had a chance to wreak havoc on our sense of self-worth, we can be alerted to an opportunity for introspection and questioning.

Who do you think you are?

Some days, a Buddhist teacher is the last thing in the world I want to be. I want to be that young practitioner again who would go into an interview with a teacher and unload all of my problems, hoping for some relief. I want to stare up at the kind faces of teachers with a sense of awe and reverence. Part of this impulse is wholesome, and part not. The part of me who does not want to be a teacher is the part of me who wants to be a student again. I love studying Buddhism, asking questions, seeking out wisdom. It is my goal to nourish the impulse in myself to be a student even as I try not to encourage the voice inside my head that tells me I should never speak, share my wisdom, or lead. Being a student and being a teacher are not antithetical. We can share what we know and what we have learned in a humble way if it comes from our direct experience, if we do not embellish or exaggerate. And we can simultaneously keep a sense of childlike wonder and curiosity about our minds and the world around us.