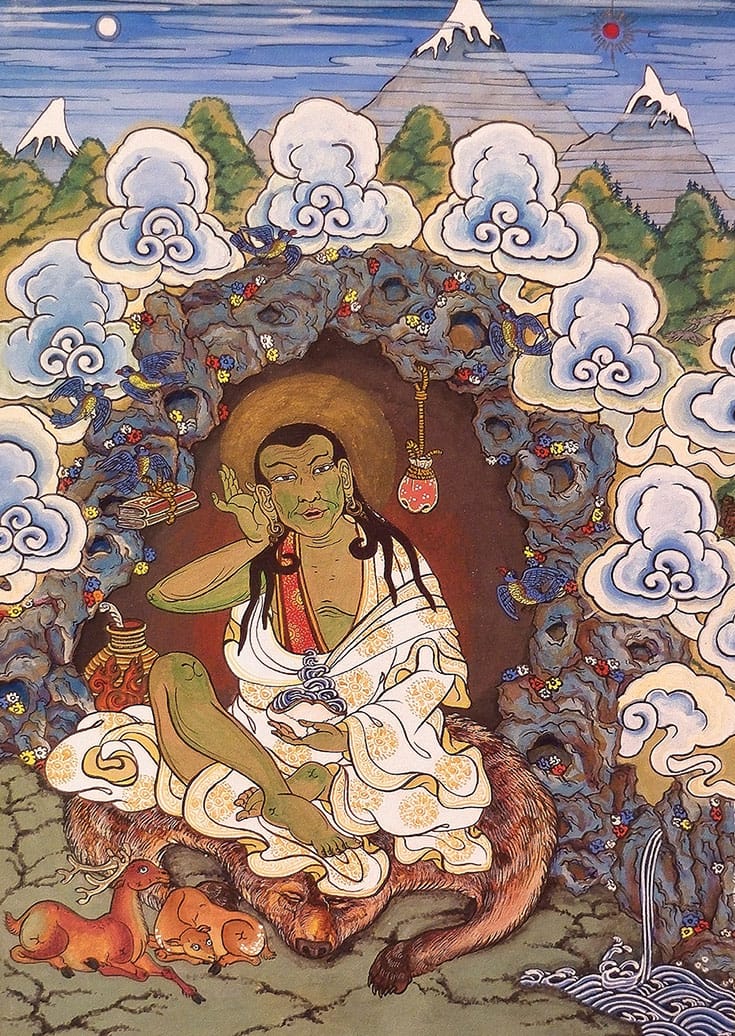 One of the oldest examples of Buddhist writing is the Book of Eights, or Atthakavagga, a short collection of poems preserved in the Pali Canon. In The Buddha Before Buddhism: Wisdom from the Early Teachings (Shambhala 2016), Gil Fronsdal explores this ancient anthology, arguing that it is remarkable in that it presents “the Buddha’s teachings pared down to their most essential elements, free of the more complex doctrines often associated with Buddhism.” In it we find no numbered lists or complicated doctrines. There is no mention of the four noble truths, the eightfold path, the four foundations of mindfulness, or the five aggregates. The text even denies the role of ultimate truth in finding peace. Instead, it simply offers insight into human life that still resonates today.

Milarepa is one of the most revered figures in Tibetan history, and his story has inspired seekers all over the world. Milarepa: Lessons from the Life and Songs of Tibet’s Great Yogi (Shambhala 2017), edited by Judith Lief, presents Chögyam Trungpa’s seminars on Milarepa’s life and songs of realization. Conducted in the U.S. between 1970 and 1976, these lectures cover a range of topics, including the teacher-student relationship, materialism, and Mahamudra nonmeditation, revealing again Trungpa’s extraordinary gifts as a teacher and making Milarepa’s example immediately relevant to our life and practice.

Scholar-monk Bhikkhu Bodhi’s The Buddha’s Teachings on Social and Communal Harmony (Wisdom 2016) couldn’t be more timely. This collection of short introductory essays and selections from the Pali Canon presents some of the earliest Buddhist discussions of friendship, community, conflict resolution, and the creation and protection of a just and equitable society. While many of the passages teach cooperation and the peaceful resolution of disagreement, the Buddha reminds us that in some cases a particularly toxic figure must be removed: “Though he is devious, a speaker of lies, you should know him as he truly is; then you should all meet in harmony and firmly drive him away.” He also warns about the wider risks of having an unprincipled leader: “When kings are unrighteous, the royal vassals become unrighteous. When the royal vassals are unrighteous, brahmins and householders become unrighteous. When brahmins and householders are unrighteous, the people of the towns and countryside become unrighteous. When the people of the towns and countryside are unrighteous, the sun and moon proceed off course.” This book is essential reading for the socially engaged individual, Buddhist or otherwise.

For Nirvana: 108 Zen Sijo Poems (Columbia 2016) contains the remarkable poetry of the Korean Zen lineage holder Cho Oh-Hyun (b. 1932), a monk and award-winning writer who has been in retreat since age seven. Translated by scholar Heinz Insu Fenkl, these poems are everything that great Zen writing is known for—perplexing, bizarre, moving, provocative—and also frequently morbid, as in the case of “At the Razor’s Edge,” which declares multiple deaths and the loss of fingernails, toenails, and eyebrows as prerequisites for monastic life. Rich in possible meaning, this book is an ideal source of inspiration for Zen practitioners and lovers of great poetry alike.

Jean-Luc Achard’s The Six Lamps: Secret Dzogchen Instructions of the Bön Tradition (Wisdom 2017) guides us into the world of Dzogchen according to Tibet’s Bön religion, offering translations of essential texts, including Instructions on the Six Lamps, a central work of the inner cycle of Bön Dzogchen teachings. With poetic beauty, Instructions on the Six Lamps points to our natural state and the meditative contemplation of its dynamic manifestations, urging us to find awakening through the recognition of our mind’s essence as the union of emptiness and clarity. A major contribution to the study and practice of Dzogchen, this book offers a glimpse of Bön’s highest teachings.

Prominent women Soto Zen priests come together to offer commentary on one of the Buddha’s first teachings in The Eightfold Path (Temple Ground 2016), edited by Jikyo Cheryl Wolfer. Each chapter is written by a different Soto Zen author, covering the eightfold path sequentially in its entirety. One of the strengths of this volume is the tremendous skill with which these teachers draw from Soto tradition in confronting the challenges facing contemporary practitioners. Teijo Munnich’s chapter on right effort, for example, stays close to the writings of Dogen when insisting that just getting yourself to the meditation cushion is right effort and that doing so helps us step into life rather than out of it. Consistently illuminating, this book testifies to the brilliant women leading Soto Zen communities today.

Asian Traditions of Meditation (Hawai’i 2016), edited by Halvor Eifring, examines some of the myriad meditative practices that have developed across Asia, highlighting the major parallels—and the major differences—between Buddhist, Hindu, Jain, Sikh, Daoist, and Confucian forms of meditation. Reading the chapters on Hindu meditative traditions in this book, a Buddhist practitioner may be struck by just how “Buddhist” so much of it seems, which of course is due to the shared origins of Hinduism and Buddhism. Yet not all commonalities between Asian meditative traditions are the result of historical connection, as in the case of Classical Taoist forms of meditation, which appear to have emerged independently of Indian traditions yet still share much with Buddhist meditation in their focus on posture, breathing, and tranquility.