A recommendation of books for mindful living and mindful imaginations. 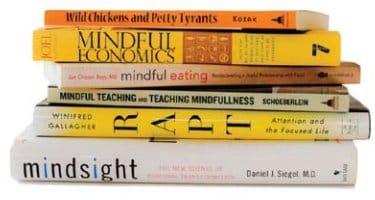 After perusing my quickly expanding collection of books relating to mindfulness, I have selected several to share with you. We’ll start off with Rapt: Attention and the Focused Life (Penguin Press) by Winifred Gallagher, an accomplished behavioral science writer whose books have a breezy style rich with detail and literary allusions. A few years ago she was diagnosed with a form of cancer that threatened her life. Quoting Samuel Johnson on how the prospect of hanging focuses the mind, Gallagher talks about how learning to focus—to let go of distraction and choose what to attend to—was vital in helping her navigate months of chemotherapy, surgery, and daily radiation treatments.

Her realization that “your life is the sum of what you focus on” became the inspiration for this book. Rapt—which takes its title from a slightly hoary word describing intense absorption—begins with a survey of what psychology, philosophy, and neuroscience have said and are saying now about attention. Taking us on an imaginary walk through New York’s Central Park and the nearby Frick Museum, she explores the differences between bottom-up attending—responding to immediate stimuli that literally “grab our attention” (a skill that clearly helps us to survive)—and top-down attending, or organizing the world in finely honed frameworks that tell us what to see (essential to avoid swimming in chaos).

The latter part of the book explores the work of Richie Davidson on the power of meditators to alter brain function and Richard Nisbett’s studies of cultural differences in perception. (A Chinese graduate student told Nisbett, “You and I think about the world completely differently. You think it’s a line, and I think it’s a circle.”) The book concludes with a visit to a Jon Kabat-Zinn program at Omega Institute, a sit-down with Dugu Choegyal Rinpoche (the monk who appeared on the cover of National Geographic with wires coming out of his head), and a discussion of “savoring”—learning to enjoy. As a layperson’s tour of the benefits of focusing the mind, Rapt is a rich and timely offering. … Mindful Eating: A Guide to Rediscovering a Healthy and Joyful Relationship with Food (Shambhala Publications) by Jan Chozen Bays is all about savoring, and it provides both detailed insight and instruction.

Chozen Bays, an accomplished pediatrician and meditation teacher, should be recruited by the slow food movement. She helps us see how “the once straightforward relationship between hunger, eating, and satisfaction of our childhood becomes tangled up in all sorts of thoughts and emotions.” The backbone of the book is a section on discerning seven types of hunger (eye, nose, mouth, stomach, cellular, mind, and heart) and how to satisfy each. There are also simple guidelines for mindful eating (including how to tame the “inner critic”) and cultivating gratitude—the key to feeling sated. My favorite mindfulness book from the past year, Mindful Eating shows us dieting as a way of not-fighting and lets us know how rewarding it can be to pay mindful attention to food and drink. Her spoken instructions are included in a 75-minute CD that accompanies the book. … In Mindful Economics: How the U.S. Economy Works, Why it Matters, and How it Could be Different (Seven Stories Press), Joel Magnuson doesn’t instruct us in how to practice mindfulness and do a better job with our household budget.

This is a big-picture book. Magnuson’s three core values of a mindful economy are environmental sustainability, social justice, and stability. Since meditation is not discussed, is this simply progressive economics with the label “mindful” tagged on to give it cachet? That’s a popular trick these days, but my reading of the book tells me that’s not the case here. It’s an ambitious book that paints the picture of our macroeconomic world—stocks and bonds, monetary and trade policies, and so on. It’s a shadow version of the big textbook Economics by Paul Samuelson that the MBAs read. But when he gets down to the nub, Magnuson places at the center of his view of how to live “economically” the ability to see clearly, to let discursive chatter go, and to see interdependent connections.