The British Library showcases masterworks of Buddhist printing in a new exhibition that explores the life of the Buddha and Buddhism’s spread across Asia. 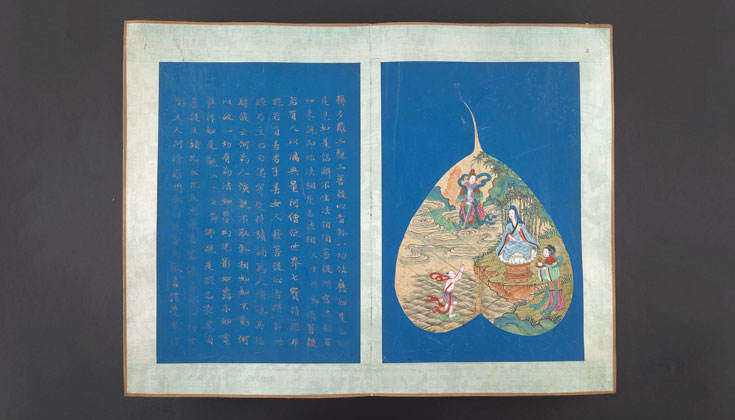 The British Library opened its newest exhibition, Buddhism, on October 25th. Buddhism explores the printed and textual tradition of Buddhism, featuring 120 items from the British Library’s collection of manuscripts, prints, and art. The exhibition presents a look at Buddhism that spans 20 countries and 2,000 years.

The exhibition is thematically split into four sections: life of the Buddha, Buddhist philosophy, the spread of Buddhism, and Buddhist practice. The space is filled with crimson decor and soft, rhythmic recordings of monastic ceremonial music. Each section is lavishly colored with illuminated scriptures, scrolls, wall hangings, and manuscripts from across the millennia of Buddhism’s development, including a beautiful series of Thai mural paintings depicting scenes from the Vessantara Birth Tale, commissioned by the Library specially for the exhibition.

Buddhism focuses on the materiality of Buddhist texts, showcasing how scriptures were transmitted across cultures and time. Despite the deep oral tradition of the dharma (scholars estimate that the sutras weren’t put to text until nearly 500 years after the Buddha taught), the exhibition teaches visitors how vital text and print was to Buddhism’s development.

Print production and Buddhism matured in a “mutually beneficial relationship,” says Jana Igunma, the head curator of the exhibition and the curatorial lead for the Thai, Lao, and Cambodian collections at the British Library. Transcription and printing helped transmit the dharma across the vast Asian landscape as it spread outwards from India and China. Igunma points out that transcription wasn’t exclusively used for scripture — there was also a great need for printing workshops in the monasteries in order to create objects for everyday rituals, like prayer flags, temple banners, devotional art. 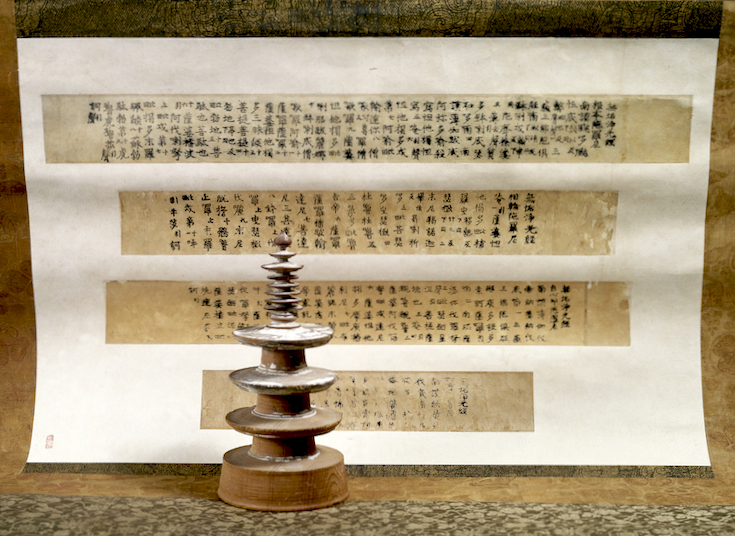 The “Hyakumantō darani,” or “One Million Pagoda Dharani,” one of the earliest examples of printing in the world, dated to 764 – 770 CE.

“So we have texts on paper, on palm leaves, on gold, silver, ivory, silk, many different materials, which shows the manuscript tradition and how it evolved, and how the role of printing was very important in the spread of Buddhism in East Asia,” says Igunma.

Printing technology equally benefited from Buddhist communities, which developed early forms of print production long before Gutenburg. The exhibition features one of the earliest examples of printing in the world, the Japanese Hyakumantō darani or ‘One Million Pagoda Dharani,’ dating to 764-770 CE.

The section on the Buddha features many beautiful, colorful artwork depicting the Buddha and his past lives, with scenes from the Jataka tales. The section on Buddhist philosophy showcases some of the earliest available manuscripts of the Lotus Sūtra, the Diamond Sūtra, and the Tibetan Book of the Dead.

But the exhibition shines brightest in its “Spread of Buddhism” section. Down the length of the hall, visitors can walk past Buddhism’s evolution through languages and cultures, as experienced through text. The section begins with the functionality of lightweight, bare missionary scrolls for carrying the dharma abroad. Then the translations – Sanskrit to Khotanese, Pāli to Sinhalese, Chinese to Tibetan. These manuscripts show Buddhism spreading through Asia and its flourishing across cultures, represented by lavish ornamental scriptures of gold and silk commissioned by different royalties. The array of objects also reveals consistency; as the dharma reaches new cultures, communities recall past scriptural forms, manufacturing thin accordion-style books such as orihons and samut khoi that mimic the shape of the original palm-leaf manuscripts that carried Buddhism eastward from India.

Buddhism focuses mainly on the aesthetics and materiality of the Buddhist textual tradition and how Buddhist beliefs are represented in these images. While there are objects and manuscripts from many different schools and lineages, there is no substantial attempt to explain divergences between teachings. 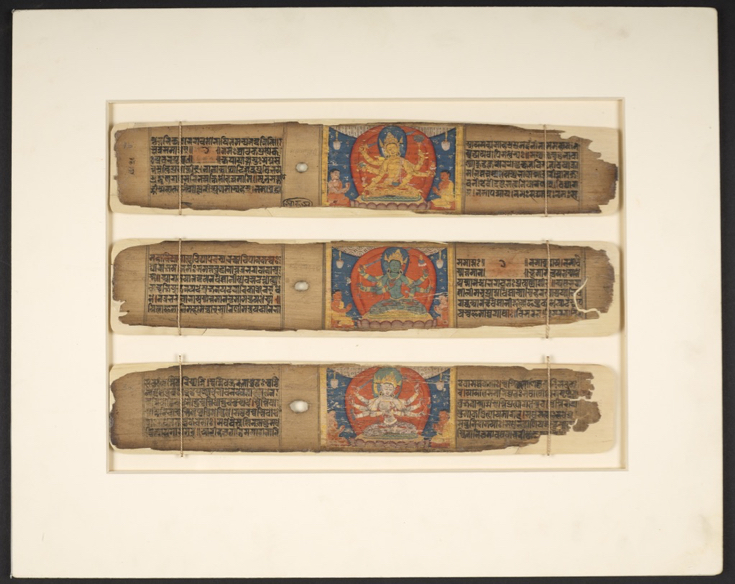 Nevertheless, the curatorial team had advisors from the London Fo Guang Shan temple, the London Wimbledon Thai Buddhapadipa temple, Soka Gakkai International and the Sakya Buddhist centre of London  to help develop the exhibition. Igunma says that these Buddhist communities helped guide the team towards showcasing items that would appeal not only the general public, “but also what Buddhist practitioners who live in this country would appreciate to see.”

The British Library’s Buddhism exhibition recalls the Illuminated Manuscripts exhibition put on by the library last year — a different area of the world and a different set of monks, but a parallel exploration of the intricate details that practitioners have painted and designed into their devotional texts and objects over centuries.