Members of the Buddhist community are fearful the violence could escalate from vandalism to physical threats. 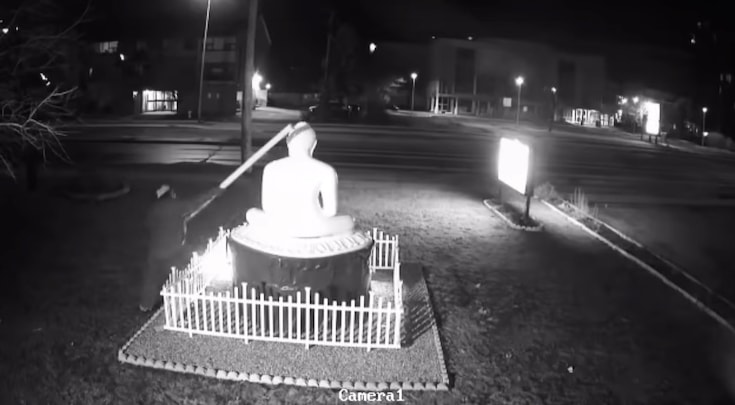 A surveillance camera outside the Hilda Jayewardenaramaya Buddhist Monastery in Ottawa, Canada, caught a vandal repeatedly hitting a buddha statue with a piece of wood. This marks the third act of vandalism against the statue in just over a year.

In March 2018, a vandal decapitated the statue, and after the monastery raised $7,000 to install surveillance cameras, the statue was damaged again several months later. A man was charged with mischief for the second incident, but was later acquitted in trial. The statue was a gift to the monastery from Sri Lanka and is valued at $8,000.

This time, as surveillance cameras show, an individual attacked the statue on Wednesday morning around 1:30 am with a wooden stick that he left at the base of the statue. A monk found the stick the next morning, on which was written “God’s first commandment: Thou shalt have no other gods before me.”

“We are a peaceful community,” Thero said. “Canada is a peaceful society, Ottawa is a beautiful city with beautiful people. We just want this not to happen again.”