The Buddha statue after the second attack. Photo via the Motor Avenue Improvement Association’s website.

A beloved Buddha statue in the Los Angeles neighborhood, Palms, has been vandalized with a sledgehammer for the fourth time, the LA Times reports.

Last month, the Buddha statue was decapitated when a man in a white sedan pulled over and began destroying the statue with a sledgehammer.

The statue, which sits on a traffic island at Jasmine Avenue and National Boulevard in Palms was replaced, but the vandal returned last week to destroy the statue for a second time. The replacement statue’s head was reinforced with a metal bar, so the man made two more trips to the statue in an effort to destroy it.

Two people witnessed the initial incident, and the man was “heard yelling about Al Qaeda and Muslim extremism and things of that nature.”

Lee Wallach, director of the Motor Avenue Improvement Association, told the LA Times that the vandalism of the statue has upset the neighborhood’s residents. 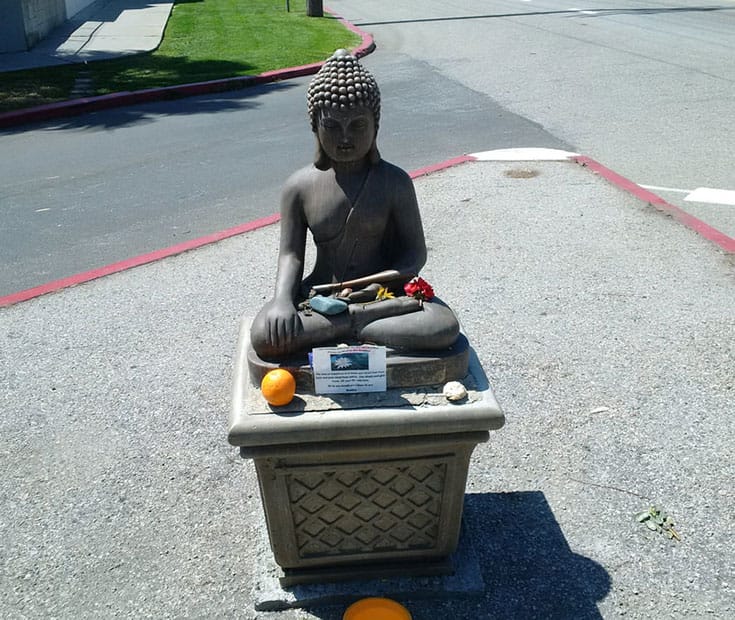 Before the Buddha statue appeared on the traffic island, the area was used as a local dumping site, where people discarded old couches, beds, and large appliances, forcing the city to come pick them up from the intersection.

One night, the Buddha statue appeared from an unknown source, and the large planter it was raised on stopped people from leaving large items on the median. Residents began taking care of the Buddha statue, and leaving flowers around it.

The vandalism of the Buddha statue has brought the community even closer together through their efforts to protect it. “In Palms we have been both blessed with Buddha and brought together as a community after his desecration and destruction for a second time… the individuals that damaged and desecrated Buddha did not realize that this would strengthen and mobilize the community,” the Motor Avenue Improvement Association wrote on their website. 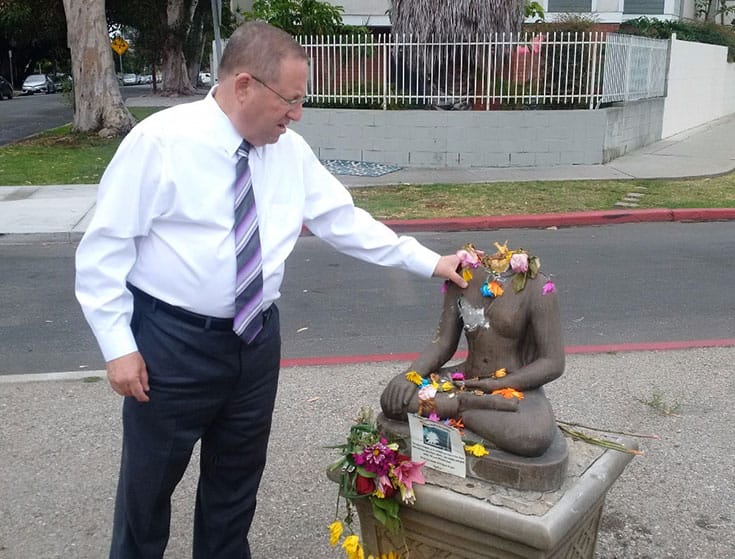 The community hopes to find the vandal and educate him. “We also will work to find the individual that needs our assistance and help,” the Motor Avenue Improvement Association writes. “His destruction of Buddha is a call for help. It is clear he does not truly understand the philosophy of Buddha nor the spirit of Palms.”

Wallach says the neighborhood will not let this “hateful activity” win.

The vandalism has been reported to Los Angeles Police Department, and the community hopes to raise $5,000 to replace the Buddha statue with a stronger metal version and security cameras. A donation page has been created to replace the vandalized statue.