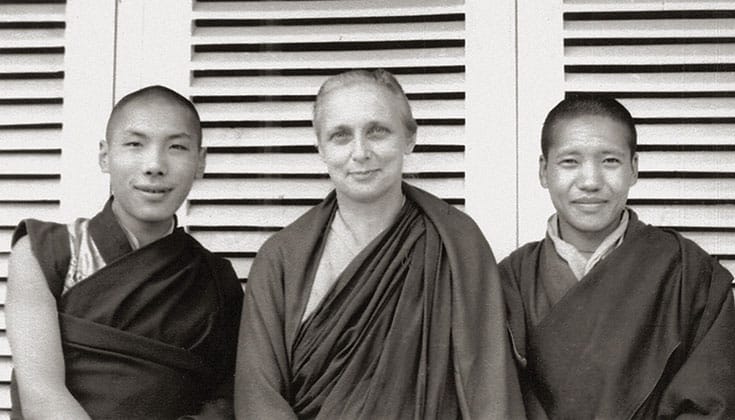 Vicki Mackenzie’s The Revolutionary Life of Freda Bedi (Shambhala 2017) tells the story of the first Western woman to become a Tibetan Buddhist nun. An Oxford-educated author (her publications included an account of her time spent as a political prisoner in Lahore and a children’s book with Indian political themes), Bedi was a close disciple of the Sixteenth Karmapa and a mentor to Lama Zopa Rinpoche, Gelek Rimpoche, Chögyam Trungpa Rinpoche, and Akong Rinpoche, among other young lamas who fled Tibet. Before her engagement with the Tibetan cause, she had been a freedom fighter in Gandhi’s struggle for Indian independence, having married Baba Pyare Lal Bedi, a direct descendant of Guru Nanak (1469–1539), the founder of Sikhism. They had three children, one of whom became a Bollywood legend. She first took novice ordination at age fifty-five under the Karmapa and later became fully ordained through Chinese Buddhist lines. With the Karmapa’s permission, she even gave initiations—an astonishing thing for a Western woman to do at that time. These and other remarkable achievements fill Mackenzie’s book, foregrounding an unsung pioneer in the spread of Tibetan Buddhism to the West.

There has long been a belief in some Buddhist traditions that a person’s last thought before death can dramatically alter their next life. This final thought is said to be so powerful that it can overturn a lifetime of negative actions and, in some cases, even lead to liberation. In Right Thoughts at the Last Moment (Hawai’i 2017), Jacqueline Stone builds on her years of research into Buddhist understandings of death to explore deathbed practices in early medieval Japan. She explains that as early as the year 986, we find a collective of monks dedicated to helping each other obtain rebirth in the Pure Land through focusing on the Buddha at the moment of death. Yet as practices like these spread, so too do new anxieties: what if someone dies badly or thinks of the wrong thing? Such fears led to new strategies for helping the dying make the most of a terrifying yet critical moment.

What might a secular brand of Buddhism look like? Stephen Batchelor has spent years attempting to answer this question; his controversial and compelling works have challenged traditional perspectives on what it means to be Buddhist. In his new book, Secular Buddhism (Yale 2017), we find selections from his writings in journals, anthologies, magazines, and newspapers along with new pieces that, taken together, reflect the evolution of his thinking. For Batchelor, it has become clear that certain Buddhist practices are transformative whether one is religious or not—so why, he wonders, should we commit to Buddhism as a religion at all?

Discussing the Buddhist path, the Chinese Chan master Mazu Daoyi (709–88) remarks: “We become stained by being over-indulgent in life, fearing death, striving, and chasing after goals. If you want to grasp the Way directly, it is none other than your ordinary mind.” What does Mazu mean by “ordinary mind”? What’s the problem with striving? While these are million-dollar questions in Chan with no straightforward answers, contemporary Japanese scholar Fumio Yamada presents his own perspectives (hint: it has more to do with accepting yourself than with restricting negative emotions) in Master Ma’s Ordinary Mind (Wisdom 2017), translated by Nick Bellando.

Anyone who has visited a Tibetan Buddhist center will have encountered a rich amalgam of objects: statues, reliquaries, paintings, mandalas, amulets, sacred pills, and many others. Despite the ubiquity of such objects in Tibetan Buddhist settings, historical discussions of their significance have been largely overlooked, taking a back seat to writings on philosophy and meditation. In his book Power Objects in Tibetan Buddhism (Brill 2017), James Gentry examines the works of the famous “Mongol repeller” Sokdokpa Lodrö Gyeltsen (1552–1624) and the debates he engaged in concerning the power of material objects. Responding to criticisms of the Nyingma school’s theories of “buddhahood without meditation,” Sokdokpa provided sophisticated theoretical support for the possibility of becoming liberated by seeing a sacred object, hearing a particular sound, wearing a special object, or tasting a sacred substance. Gentry lifts the curtain on this fascinating discussion, challenging us to rethink the importance of material culture for Tibetan Buddhist practice.

It is tempting to take Chan Buddhist texts and their stories of miraculously enlightened figures at face value, as reflecting actual historical events. But in his new book, Patriarchs on Paper (California 2016), scholar Alan Cole examines writings from the Tang and Song dynasties and challenges us to take them as creative works of literature rather than documentary windows into the past. He argues that the authors of these texts reframed past masters as figures able to transmit Buddhist wisdom in effortless and incredible ways, free from their own political and cultural contexts. But in fact, these texts served specific agendas critical to Chan’s survival, framing it as a “pure” tradition that was beneficial to the state and maximally appealing to the donors.

Prolific translator Bhikkhu Bodhi offers a massive contribution to the study of Buddhism with his 1,600-page translation, with commentary, of The Suttanipata (Wisdom 2017), an anthology of discourses from the Pali Canon that includes some of the oldest available Buddhist writing. Written largely in verse, it lacks the systematic doctrines found in many canonical works; topics like the four noble truths, the eightfold path, and the five aggregates are seldom addressed. Strikingly, Bhikkhu Bodhi notes that even the Pali word for impermanence (anicca), seemingly fundamental to any traditional understanding of Buddhism, does not occur in any of the poems, though he resists the theories of some scholars that these works represent a nascent form of Buddhism that predated formalized doctrine. He argues instead that they served a different purpose: “to inspire, edify, and instruct” on such topics as social ethics, devotion, death, loss, and renunciation.