Richard Reoch on how Buddhists are contributing to the addressing of  “a humanitarian and human rights nightmare.” 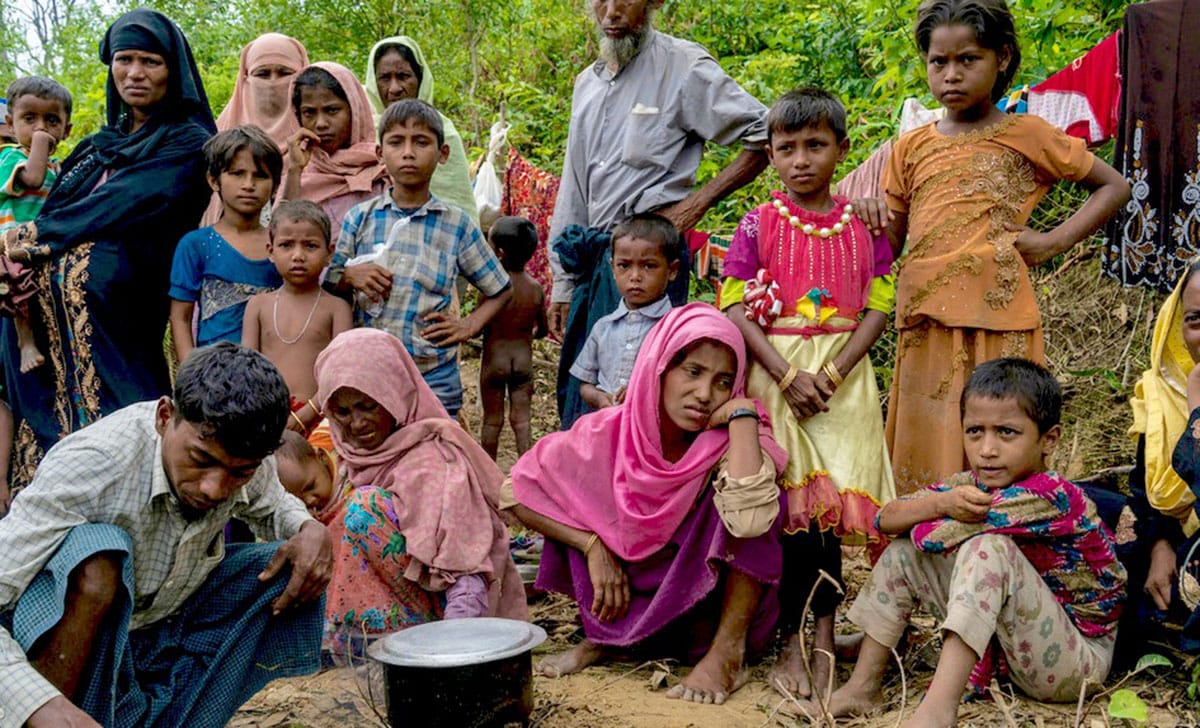 A Rohingya refugee family lives on the side of the road without shelter in Bangladesh. Photo © UNHCR/Adam Dean.

World Buddhist leaders are appealing for peace in Myanmar and Buddhist charities are bringing aid to victims fleeing the violence.

Buddhist Global Relief, founded by one of the western world’s leading translators of the Buddha’s teachings, and the Tzu Chi (literally “Compassionate Relief”) Foundation, launched by a renowned Taiwanese Buddhist nun, are both dedicating relief resources to what UN Secretary General Antonio Guiterres has called “a humanitarian and human rights nightmare.”

This is the fastest exodus of human beings from a single country since the outbreak of the Rwandan genocide.

The United Nations and major aid agencies now report that more than six hundred thousand people — mainly women, children and the elderly — have fled over the border between Myanmar (also known as Burma) and Bangladesh since late August. Thousands more continue to flood in every day.

This is the fastest exodus of human beings from a single country since the outbreak of the Rwandan genocide. The vast majority are members of Myanmar’s Muslim Rohingya, caught up in a violent conflagration that, according to the country’s security forces includes official “cleansing operations.” The military said 176 out of 471 villages had been emptied of people, and an additional 34 villages “partially abandoned.”

“In these critical times, we have an obligation to aid those immersed in the world who live on the brink of destitution and despair,” said the Venerable Bhikkhu Bodhi in an essay that inspired the creation of Buddhist Global Relief in 2007. He is the former president of The Buddhist Publication Society in Sri Lanka and author of numerous Buddhist translations and commentaries. “The special challenge facing Buddhism in our age is to stand up as an advocate for justice in the world, a voice of conscience for those victims of social, economic, and political injustice who cannot stand up and speak for themselves,” he wrote.

“A drop in the great lake of what is needed”

“This grant is just a drop in the great lake of what is needed by the Rohingyas, and even more than food and other material requisites, what they need is a guarantee of physical safety, restoration of their homes, and full acceptance as citizens in Myanmar, with all the concomitant rights,” said Bhikkhu Bodhi, who was also one of the initial signatories to an international appeal published last month by Lion’s Roar.

Addressed to the ruling council of Buddhist monastics in Myanmar, the appeal has now been signed by more than 200 Buddhist leaders and teachers throughout the world.

“We are greatly disturbed by what many in the world see as slander and distortion of the Buddha’s teachings,” the appeal states. “In the Dhamma [Buddhist teachings] there is no justification for hatred and violence. Mean-spirited words and direct provocation . . . stand in stark contradiction to monastic precepts and Buddha’s teachings on universal morality, peace, and tolerance.”

They have urged the country’s Buddhist leaders to take “a strong stand against hate speech and ethnic cleansing” and have called on “the government and military of Myanmar, including State Counsellor Aung San Suu Kyi, to apply their full resources in support of peace and for the protection of vulnerable communities of all religions and ethnicities.”

“In the face of discrimination, oppression, and violence there is no room for silence and acquiescence,” says Hozan Alan Senauke, Vice-abbot of Berkeley Zen Center and founder of the Clear View Project—working to develop Buddhist-based resources for relief and social change in Asia and the West—who spearheaded the appeal. “The Buddha’s teachings of Wisdom and Compassion are not gifts just for Buddhists as ‘chosen people.’ They must be our offering to all beings of all faiths and nationalities.”

“We cannot take ourselves out of this picture”

In a subsequent statement on behalf of the Buddhist Churches of America, made public this month, Bishop Kodo Umezu said, “we deeply deplore the killings, torture, burning of villages and other actions against humanity occurring in Myanmar. What we are witnessing is not an isolated occurrence in our history. Similar events have been happening throughout the history of humankind. We cannot take ourselves out of this picture.”

The foundation, which has over 10 million members worldwide throughout 47 countries, engages in medical aid, disaster relief, and environmental protection. Their disaster relief teams, who have been active in more than 80 countries worldwide, provide short-term aid and take part in long-term projects to build new homes, schools, hospitals, and places of worship (including churches and mosques for non-Buddhists) for victims following a disaster.

Also joining the voices of the Buddha’s family being raised globally is the Shambhala organization, with an appeal just delivered to Myanmar’s State Sangha Maha Nayaka Committee (Ma Ha Na). “We have a special sensitivity to the human tragedy now unfolding in Myanmar because our own lineage holders, being of Tibetan origin, have themselves been refugees and experienced the dreadful consequences of violence and devastation,” the Shambhala appeal states.

“We appeal to you at this critical time, as the foremost governing body of Buddhist monastics in Myanmar, to endeavor as far as possible under the prevailing circumstances to take every step possible to uphold and spread the Buddha’s teachings on universal compassion and loving kindness and ensure that these principles are embodied in the treatment of all people within Myanmar regardless of faith, ethnicity or any other characteristics,” the appeal urges.

“Speak out against the preaching of prejudice”

It also asks the monastic leaders to “continue to speak out against the preaching of prejudice and inter-communal aggression in the name of Buddhism, and take all measures to dissuade monastics and members of the lay community from engaging in acts of hatred and violence” and to “use your influence with the civilian and military authorities to prevent further killing and displacement of civilians, to permit direct international humanitarian aid to the victims, and cooperate fully with the United Nations and its specialized agencies in working to resolve this conflict.”

As people continue to flee Myanmar, international agencies have launched a massive oral vaccination program – the second largest in history – in an effort to prevent a cholera epidemic among the refugees. The aim is to deliver 900,000 doses of vaccine by the end of November. This will include immunizing a quarter of a million children, many of whom been separated from their parents or been orphaned in the violence.

The crisis is far from over.  Reporters outside the country have been in contact with half a dozen journalists inside Myanmar who say they are facing some form of harassment, even death threats, for not following the government line on the Rohingya issue. A courageous local report earlier this month said, “it is vital that preventative measures be taken to end the spread of hate speech and incitement to violence against minorities.”