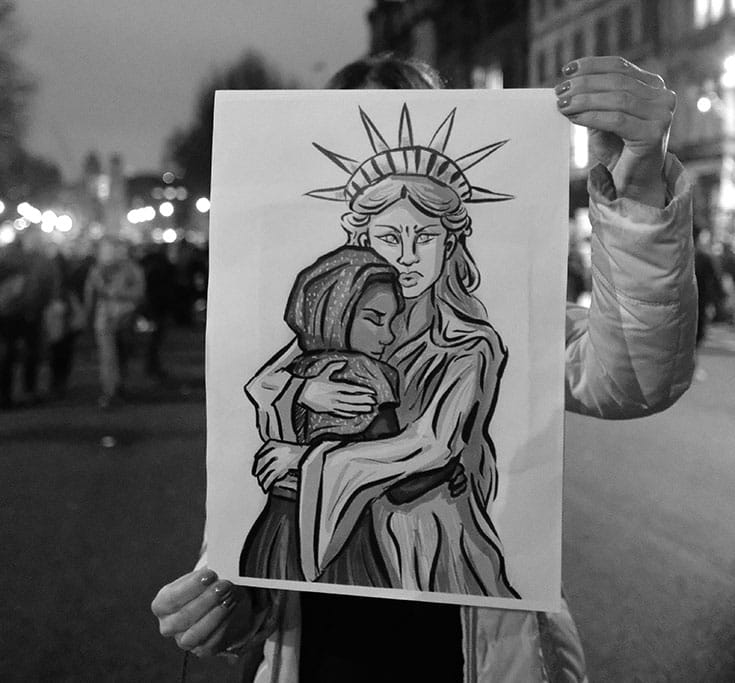 Demonstrator with a message at a rally in London. Photo by Alisdare Hickson.

Buddhist Churches of America (BCA) has issued a statement in response to President Donald Trump’s executive order issued last week, which temporarily halts travel to the United States from seven predominantly Muslim nations and suspends the U.S. Refugee Admissions Program for 120 days. The order has been met with much resistance, sparking protests across America (and a number of responses from Buddhist teachers and community members).

The Executive Order signed by President Trump on January 27, 2017 has been causing serious concerns and suffering for many people, especially Muslims and immigrants. It has brought back memories of the unlawful mass incarceration of Japanese Americans during World War II.

Even if the intent of the Executive Order is to protect our citizens from terrorist attacks, we strongly oppose any actions that lead to discrimination against certain groups just because of their ethnicity or faith.

We should remind ourselves that all people deserve to be respected and treated equally under the law. Each faith group should encourage and promote peace and harmony based on its beliefs and principles, and help create a better nation that we can be proud of.