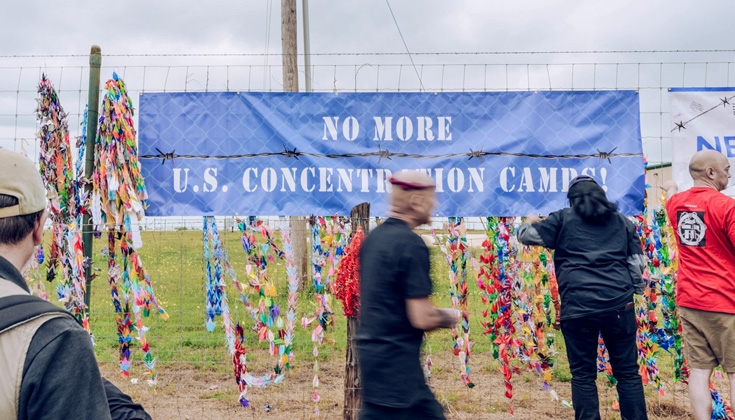 Japanese American protestors placed tsuru, or origami cranes, on the fence surrounding the South Texas Family Residential Center at a March 2019 protest. Cranes will be taken to the upcoming July 20 protest at Fort Sill. Photo via Grassroots Leadership on Facebook.

A Buddhist memorial service coordinated by Soto Zen Buddhist priest Duncan Ryuken Williams will be held at a protest against migrant detention at Fort Sill in Oklahoma on Saturday, July 20.

Fort Sill is the site of a former WWII internment camp that held 700 people of Japanese ancestry, 90 of which were Buddhist priests. The Department of Health and Human Services announced on June 11 that up to 1,400 unaccompanied migrant children would be transferred from Texas to Fort Sill. Tsuru [cranes] for Solidarity, a nonviolent and direct-action project working to end migrant detention sites, mobilized a protest at Fort Still on June 24, at which Williams officiated a Buddhist ceremony. Now, Dream Action Oklahoma is organizing a coalition of groups to protest at Fort Sill.

Williams, who wrote about the parallels of injustice between WWII’s Japanese American internment and the detention of migrants today for Lion’s Roar, has also called for other Buddhist leaders to support Tsuru for Solidarity and the upcoming protest at Fort Sill. The project was created by Japanese American community leaders Satsuki Ina, Nancy Ukai, and Mike Ishii  to “give voice to the moral outrage of the Japanese American and Japanese Latin American community at the ongoing mass detentions in the United States.” In March 2019, the project travelled to another former WWII internment camp, Crystal City, to protest at the South Texas Family Residential Center in Dilley, Texas. The group strung 30,000 tsuru (origami cranes) on the fences surrounding the detention center in solidarity with those detained. The July 20 protest will be their second at Fort Sill.

“While it is unlikely that we can assemble such a large group of Buddhist priests to fly out to Oklahoma on July 20 to honor our ancestors,” Williams writes, “I would like to appeal to Buddhist leaders of all lineages to support this memorial service. We will dedicate any merit derived from the chanting of sutras at the service to the three men who passed away during their WWII incarceration; to all those who suffered at Fort Sill in the past; to the seven children who have died in the custody of the U.S. Border Patrol in the past year; to all the migrants who are facing such difficult circumstances currently; and to the guards and others who are overseeing the children to pray for the prevention of history repeating itself.”

Those who cannot attend the protest in person are invited to participate by folding an origami paper crane and it mailing to:

The paper cranes will be taken to Fort Sill and future protests Tsuru for Solidarity participates in. Financial donations toward Tsuru for Solidarity are also being collected via a GoFundMe page to support taking the organization’s actions to a larger scale. More information on the protest and how to get involved can be found on Williams’ website.