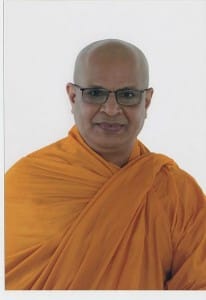 At the 2012 London Olympics, Ven. Seelawimala Nayaka Thera of the London Buddhist Vihara is in charge of the spiritual guidance of some 500 athletes in Olympic Village at Olympic Park.

Appointed as Buddhist chaplain of this year’s Olympic games, Ven. Seelawimala Nayaka Thera (born in the village of Bogoda) is the most senior Sri Lankan monk in the United Kingdom.

Many of the athletes visiting the Olympic Village Buddhist shrine come from traditionally Buddhist countries — Korea, Japan, Thailand, Taiwan, Sri Lanka, and China. In a piece run by the BBC today, Ven. Seelawimala Nayaka Thera points out, however, that not everyone who visits the shrine is Buddhist. No matter who finds their way to his shrine, Ven. Seelawimala Nayaka Thera welcomes them all, discusses their problems, and suggests that they do a bit of meditation (which he says will help balance and relax their minds).

Speaking to the BBC, he said, “As they are under immense pressure, sometimes they are stressed due to their competitions, so following meditation technique, I do a chanting to confer blessings to them. My aim is to give them strength in their search of Olympic medals.”

Ven. Seelawimala Nayaka Thera is the only Buddhist monk in the Olympic Village. He was appointed as the Buddhist chaplain for the games in London after an arduous screening process. Expressing his gratitude for the appointment, he said, “I am very proud about that. As a monk, this is a great opportunity for me; being able to extend my religious services is a great privilege and opportunity for me. I am very fortunate.”

Be sure to read the full article by Saroj Pathirana at the BBC website.