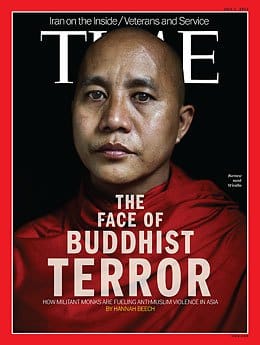 News has steadily been seeping out of Burma (Myanmar) about occasionally deadly ethnic conflict between the country’s majority Buddhist population and its Muslim minorities.

Most unusual have been reports that schemes aiming to isolate Muslims economically and socially, such as the “969 Campaign,” as well as street violence, have in some cases been directly organized or instigated by some of the country’s revered Buddhist monks themselves. This news, combined with other reports of certain monks involving themselves in communal conflict in Sri Lanka and Thailand, sometimes in alleged collusion with Buddhist-majority governments, is now garnering major international media attention.

The cover headline of this week’s international edition of Time magazine could not be more stark — “The Face of Buddhist Terror: How Militant Monks are Fueling Anti-Muslim Violence in Asia” (the link includes an editorial summary and excerpts, but the full story is behind a subscriber-only paywall)—while a New York Times report in today’s edition, “Extremism Rises Among Myanmar Buddhists Wary of Muslim Minority,” follows a 10-minute feature aired by  PBS NewsHour on Tuesday, “Myanmar’s Democracy Transition Marred by Anti-Muslim Rhetoric and Violence.” This last, which may be viewed for free at the link, includes an interview with the Burmese monk pictured on Time’s cover, Ashin Wirathu, who has spearheaded the “969 Campaign” and drawn pushback from Burma’s more established monastic organizations seeking to quell the tensions.

For those who wish to delve more deeply into this subject, Human Rights Watch issued a thorough report on Burma’s Buddhist-Muslim conflict, “All You Can Do Is Pray,” this past April.