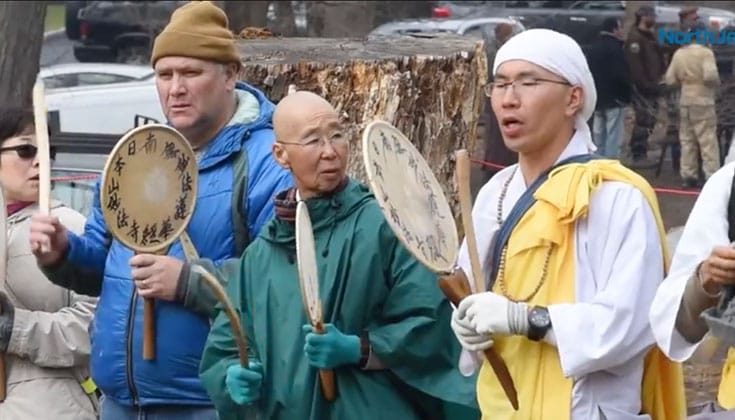 A group of activists led by Buddhist nun Jun-San Yasuda arrived at Split Rock-Sweetwater Prayer Camp in Mahwah, New Jersey on Tuesday as part of the 90-mile “Water Walk for Life” in protest of the Pilgrim Pipeline, NorthJersey.com reports.

The eight-day walk began on March 4 in Carteret, NJ, and will end on March 11th in Croton-on-Hudson, NY. Led by Yasuda, the group “is traversing roadways along the projected route of the Pilgrim Pipeline, a proposed 178-mile dual pipeline system that would run from Albany to Linden, transporting an estimated 16.8 million gallons of crude oil daily.” If completed, it is feared the pipeline will jeopardize North Jersey water supplies, and possibly compromise drinking water for millions in the event of an oil spill.

Yasuda, of the Grafton Peace Pagoda in Upstate New York, emigrated from Japan in 1978 and has since participated in many “peace walk” protests, amounting to more than 80,000 miles walked.

NorthJersey.com reports that more than 30 walkers arrived in Mahwah on Tuesday, beating drums and holding signs that read “Water is Life.” The group joined local members of the Ramapough Lenape Nation for a prayer circle and Native American tobacco ceremony.