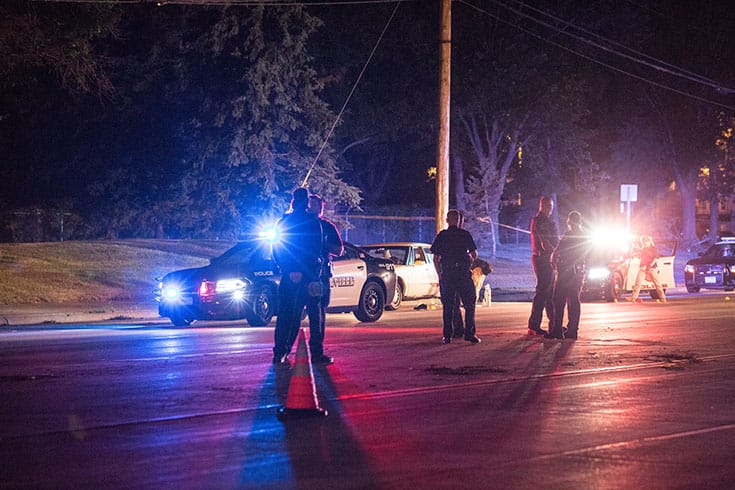 Police officers stand near the car that Philando Castile was sitting in when he was shot and killed by a police officer in St. Paul, Minnesota, on July 6. Photo by Tony Webster.

Buddhist teachers and communities, like so many of us, have been taking to social media to respond to the tragic deaths of Alton Sterling and Philando Castile, as well as Thursday evening’s sniper attacks on Dallas police present at a public protest against police violence. Here is some of what they’ve had to say.

The Buddha Does Not Discriminate

In midst of recent painful tragedies of violence and counter violence, I would like us to remember Shinran Shonin’s words describing how we are viewed in the eyes of the Buddha of Infinite Compassion and Wisdom. I would like to share these words from the Kyogyoshinsho with you.

“In reflecting on the ocean of great shinjin [the Buddha’s mind and heart], I realize that there is no discrimination between noble and humble or black-robed monks and white-clothed laity, no differentiation between man and woman, old and young.” (Collected Works of Shinran, p. 107)

Although he does not mention anything about racial issues, I can hear Shinran Shonin saying that all people are equal in the eyes of the Buddha. Discrimination comes from our defiled human minds. We live our lives relying on our unenlightened minds, but Shinran Shonin has told us how truly precious we all are in the eyes of the Buddha. He is urging us to live our lives as brothers and sisters regardless of racial differences.

Let us humbly turn to the caring call from the Buddha’s True and Real Realm of Equality. Let us live our lives respecting and caring for each other on a journey to the realm known as the Pure Land.

In Gassho (With Palms Together),

Pema Chödrön released a statement via Facebook that concluded:

The root problem is fear and hatred and how this escalates, which is where my kind of teachings could be useful. I am committed to continue to help where I can.

On my morning walk here in Charlotte, I noticed many of my neighbors had small American flags lining their yards in honor of the killed police officers. For years, I’ve walked this same path and never have I seen symbols of care for the masses of Black lives we have so viciously lost at the hands of police. I mean no disrespect. Pain does not discriminate when it comes to loss, it just hurts. Yet I felt oddly diminished and compelled to make what is often invisible visible — the need for our pain to be openly acknowledged and loved. So I am speaking here to my Black Families and Black Bodies for too many reasons to name. Perhaps it’s because my 23 year old grandson called me right after Alton Sterling’s murder and just before Philander Castile will killed, distraught, in disbelief, and afraid. Perhaps it’s because my partner and I have fallen asleep crying in each others arms empty of words. Perhaps its because the stories of our pain as a collective gets broad brushed, easily forgotten, and buried in the criminality of our being. Perhaps it’s because as a great grand mother and elder, I can feel how endangered my children are as black bodies and I can’t protect them from harm. Mainly I’m writing because spirit is moving me to do so despite my own weariness. While I mean no disrespect to the vast territory of grief that engulfs us at this very difficult time, this recorded message is for Black families and Black bodies.
In Love, ruth

what is there to say anymore? #altonsterling‪

Honestly, I feel nauseous today. As If I am willfully participating in a barbaric society. #blacklivesmatter #altonsterling #philandocastile

Been offline and now just seeing the news. Feeling grief well up as I consider our world and the violence that is so pervasive.

First what certainly appears to be a murder by a policeman in Minnesota. And now ten cops shot in Dallas, three dead, another hanging by a thread. Unspeakable upon unspeakable.

We join all of the members of the Spirit Rock community in acknowledging the tragedy of the three shootings that occurred last week (July 3-9, 2016). We offer compassion and support to the families and loved ones of those lost, and to the communities that have been torn apart in anger, fear and grief. So many voices are crying out that this violence must stop, and we add our voice to this plea.

Before leaving on retreat for his dharma-transmission ceremony, Snyder wrote a piece in which he shared a prayer, that we might seize this moment to repair the racism and violence in the United States. Read it here.

A Buddhist Cop’s Approach to Justice

Cultivating Peace in the Face of Violence