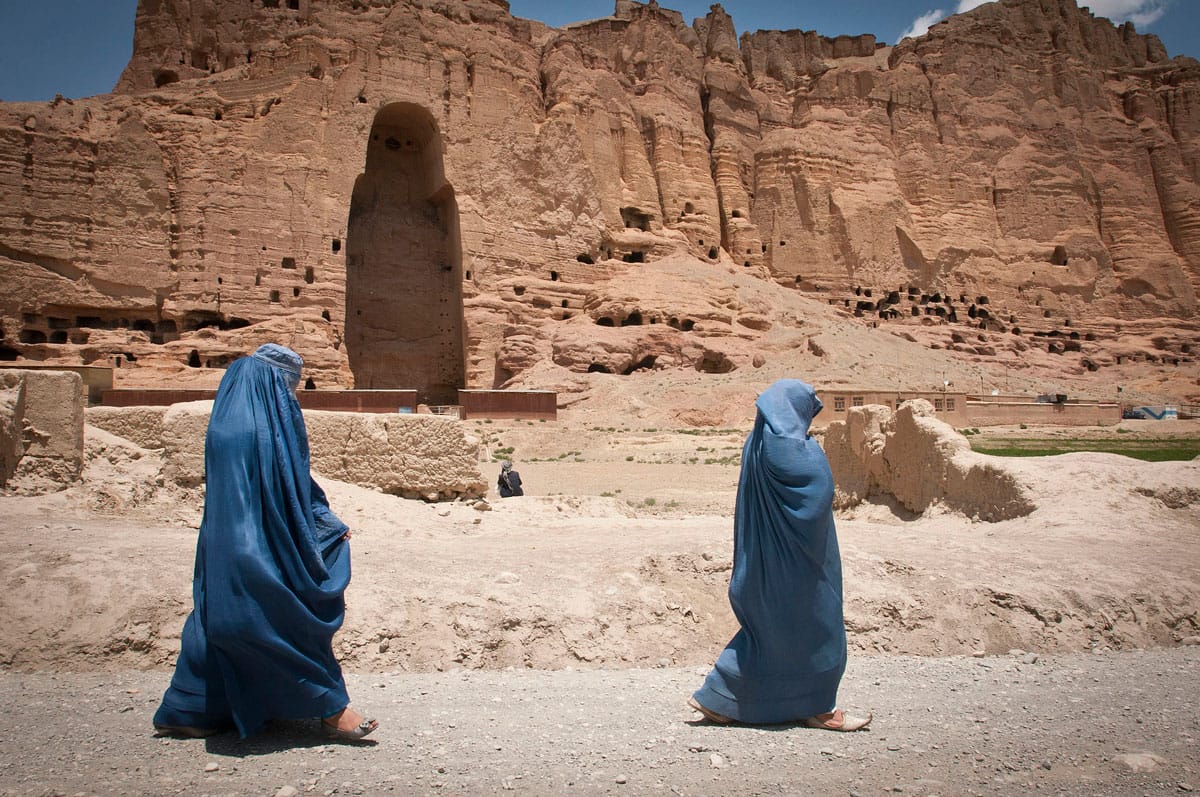 Two women walk past the huge cavity where one of the ancient Buddhas of Bamiyan, known to locals as the "Father Buddha," used to stand. Photo by Sgt. Ken Scar Date.

Afghanistan is known as a great crossroads. It was an important stop on the Silk Road—the world’s first great turnpike—and a major pathway for the spread of Buddhism. The list of conquering peoples to pass through this pivotal region includes still familiar names and names long forgotten: the Persians, Huns, Scythians, Parthians, Kushans, the Mongols under Genghis Khan, the Moguls under Babar, the Greeks of Alexander the Great, and the Mauryans led by the great Indian Emperor Ashoka. Each left a mark on Afghanistan—in the faces of the people and in the arts and artifacts left behind. In some cases, the collision of cultures resulted in some astounding blends, such as when the artistic sensibilities of the Greeks merged with Buddhist imagery to create Gandharan art.

In the centuries following the Buddha’s death around 500 BCE, one of the first great expansions of his teachings was westward into a vast area that includes parts of Kashmir, the Punjab, modern-day Pakistan and northern Afghanistan. This area was centered on the great district of Gandhara, whose capital, Purushapura, is today the Pakistani city of Peshawar.

It is thought that Buddhist missionaries first ventured into Gandhara not long after the Buddha’s parinirvana, but it was not until 250 years later, during the dynasty of Emperor Ashoka, that Buddhism would flourish there. Ashoka’s grandfather was founder of the Mauryan dynasty and made this region part of his realm. Ashoka served there as a young man, and when he later converted to Buddhism, he worked with great fervor to spread the dharma in this region, for which he had a special affection. Pillars and rocks containing Ashoka’s edicts have been found there, including one inscribed in both Aramaic and Greek.

Not long after Ashoka’s death, the Mauryan dynasty declined and the region fell back under the control of the Greeks, who had settled there after Alexander retreated. But the Greeks did not try to obliterate Buddhism, and in fact the Greek king Menandros engaged the monk Nagasena in a series of famous discussions, which became the noted Buddhist text, The Questions of King Milinda.

Many conquests later, the Kushans, a nomadic people from China, swept through central Asia and turned south into the Buddhist districts centered on Gandhara, including Udyana (the Swat Valley) where tantric Buddhism had taken root. At first, the Kushans attacked Buddhism but eventually they became great patrons, building many monasteries and stupas. The greatest of their kings, Kanishka, started his life as a headstrong warrior, but like Ashoka, he underwent a conversion to Buddhism after contemplating the tremendous slaughter he had wrought. Kanishka’s reign would lead to a great spread of Buddhism into central and eastern Asia. His patronage contributed to a rise in Mahayana culture and literature, including the birth of Gandharan painting and sculpture.

Buddhism in this region would survive yet another conquest, by the Sassanids of Iran. Although Zoroastrians, they were generally tolerant of Buddhism. It was during their reign, between the third and the fifth centuries, that the great cave monasteries of Bamiyan and the famed Bamiyan Buddhas were created.

Afghanistan’s extraordinary Gandharan statuary and cave painting is beautifully displayed in Gandhara, The Memory of Afghanistan, by Bérénice Geoffroy-Schneiter. Most of the images gathered in her book, and presented in this article, reflect the discoveries—and in some cases the actual photographs—of French archaeological teams who in 1922 were granted exclusive excavation rights on Afghan territory for thirty years. An archeologist and art historian who spent part of her childhood in Afghanistan, Geoffroy-Schneiter was drawn to the combination of spiritual power, aesthetic sensuality, and attention to detail demonstrated in Gandharan works.

But no sooner had she completed her book, in which she voiced alarm over the future of this great art, than the Taliban regime shocked the world by destroying the twelve and twenty storey high Bamiyan Buddha statues, the most notable—and to that point most durable—examples of Gandharan sculpture. For years, the Taliban had threatened to destroy these examples of a competing faith located in the homeland of a rival tribe, the Hazara, and in February of last year they made good on the threat with dynamite and artillery. Then in November, with the fall of Kabul, it was discovered that the Taliban had also systematically smashed two thousand sculptures, carvings and pottery pieces from the Kabul Museum, representing many eras and traditions. This destruction of Afghanistan’s great cultural and artistic heritage was carried out by workers using axes and hammers, and took two months. However, as these stunning images attest, the elevated spirit of Gandharan sculpture and painting, surviving in many beautiful artifacts in the world’s museums, cannot be destroyed by tyrants or hammers or dynamite.