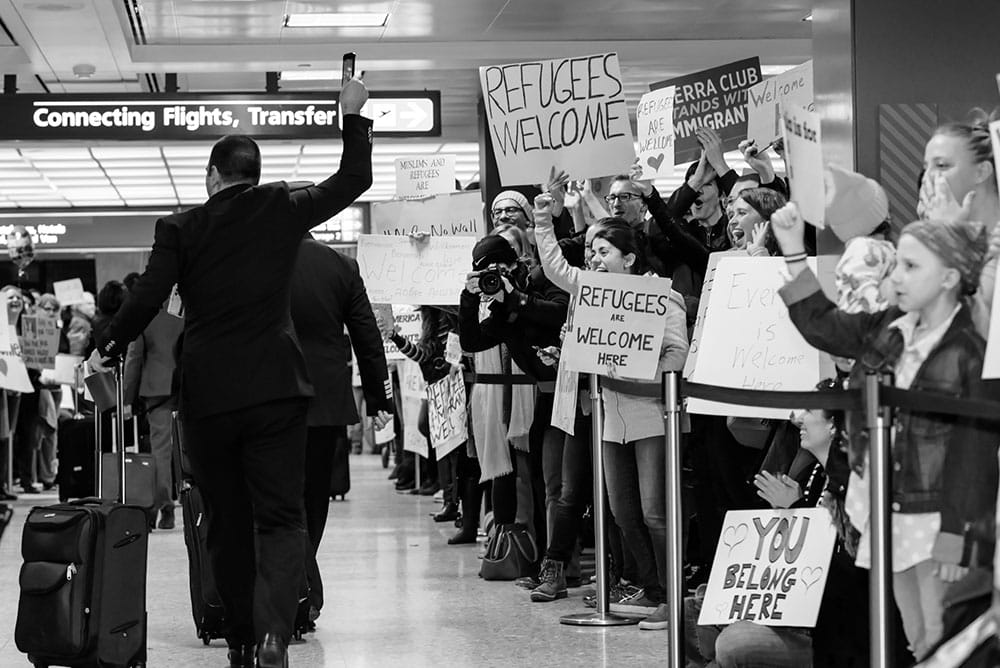 On Saturday protests at American airports erupted, seemingly “out of nowhere,” in response to an Executive Order, and its enforcement, temporarily halting travel to the United States from seven predominantly Muslim nations, and blocking Syrian refugees in the process. The order, which former New York mayor Rudy Giuliani told Fox News had originated as a “Muslim Ban,” has been condemned by critics as un-American, unconstitutional, and counterproductive.

The ACLU was able to secure a stay of the order through a court action, but the matter is far from resolved, with renewed protests in New York’s Battery Park, Boston’s Copley Square, and other locales (including more at airports) launching or continuing on Sunday. One common chant — referring to the ban, and the president’s aim to secure the nation’s southern border — is “No Ban, No Wall.”

A number of Buddhist individuals and communities joined in these actions, and took to social media to share their comments. Among these are the comments of several Buddhist teachers. We’ve rounded up a sampling of these here.

On January 27, 2017, the Office of the President of the United States of America issued an executive order that severely restricts immigration from seven predominantly Muslim countries of Iran, Iraq, Libya, Somalia, Sudan, Syria, and Yemen. The order also suspends all refugee admission to the United States for 120 days and bars all Syrian refugees indefinitely.

The Honpa Hongwanji Mission of Hawaii expresses its concern that such action, temporary or otherwise, appears to ban a class of people based on religion and/or nationality and is not consistent with the values upon which the United States of America is founded. Such action which applies in a blanket manner to those of the Muslim Tradition raises fear that history is repeating itself. Many people of our own Buddhist religious tradition, because of the ethnicity and nationality of a large portion of our members, experienced discrimination and incarceration following an executive order during WW II.

While we understand the importance of reducing terroristic threats through stricter screening procedures for entry into the United States, our government should not isolate and target entire groups based on religion, ethnicity, and/or nationality. It is the belief of the Honpa Hongwanji Mission of Hawaii that our own security as a nation is inextricably linked with the security of peoples around the world. Our polices should help relieve the suffering of all people, including those of Muslim-majority countries.

Guided by Wisdom and Compassion, may we, as individuals, communities, and a nation refrain from actions that cause divisiveness and instead act in ways that lead to peace, harmony, and safety for all peoples.

To embrace views or platforms that bring harm to others is a kind of inclusivity that has and is destroying lives at this time. It is not the path of harmony, loving-kindness, or openness to accept the views that lead to hatred and loss of freedom. I have heard some Buddhists teachers speak during this time in our country suggesting that we not choose sides but embrace all points of views regardless of the thinking as if we are witnessing a political debate or watching a football game. If ANY thinking leads to detrimental action to groups of people then that is NOT what the Buddha taught. This is not the time to test your personal capacity for equanimity or excuse oneself because you are about unity. This is a time to walk through the door of fear and at the very least speak out for those who have been rendered silent and indispensable for this would be the greatest expression of love. If not, then how can we wear the great robe of liberation?

In the name of my Muslim relatives and immigrants in my own personal family and in the world, I stand upright with you.

On my way in to work just now I drove by my local Islamic Center, where hundreds of people filled the sidewalks chanting and singing, waving signs of support for our Muslim neighbors. Thank you, thank you, thank you to those of you out there today!

Trump we will exhaust you, as we resist your so-called reality every day, until you are driven from office.

The three groups of people I used to hang out with:

Now it’s all pretty much the same group of people. My social life has been greatly clarified.

protest not out of anger, but with a mind that is clear-seeing. take action not because you are doing something for “them,” but because you know them as you. now show up 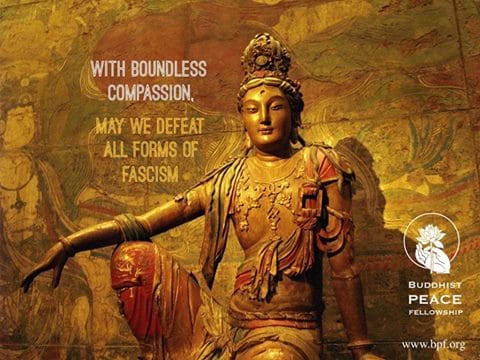 lets remember that the us immigration service has already had for some time a program of “extreme vetting” for refugees from the middle east. it took years of investigation to gain entry. shutting the gates completely based on the false information that vetting has been lax is terrible. people’s lives have been devastated. they need a place of refuge — as my own relatives did in the 1930’s when they fled europe.