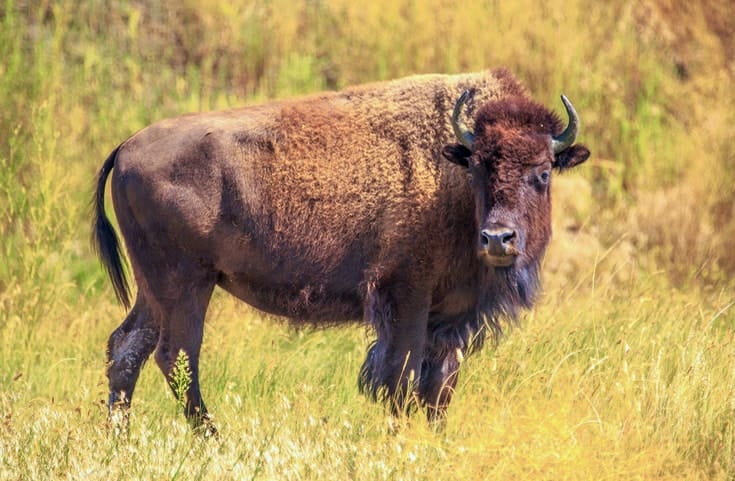 “It was surprising for us this year,” Floyd Sanderson, operations manager, said about the five births. “But it’s something that’s like the weather, you can’t control it.”

Buffaloland is owned and operated by Moonlight International Foundation, a Buddhist organization. Moonlight took over management of the park four years ago, back when there were only 38 buffalos roaming the 40-hectare pasture.

Before that, the park was under the care of PEI’s provincial government, which culled the herd annually to control the population. Because Moonlight does not believe in killing animals, the population is now managed by castrating young bulls.

“They basically would be allowed a natural death,” Dr. David Lister, a veterinarian who has cared for the buffalos for years, said.

But castrating a bull is no easy task. Buffalos are wild, unpredictable, and dangerous —especially when stressed.

The only remaining fertile bull old enough to breed at the park fathered all five calves this spring. Moonlight had planned on castrating all the bulls to freeze the population for a few years, but the fertile male avoided capture and proved too strong for tranquilizers.

Lister said the herd is healthy and well-cared for. A large amount of their diet comes from hay and silage from local farmers, as well as grass from the pasture.

Sanderson is thankful for the farmers’ support, which helps keep costs low as the buffalos continue to breed. Buffaloland is free to the public, so food, wages, and vet bills are paid through donations that largely come from Buddhists around the world.

A tourist attraction on PEI since the 1970s, the buffalo herd was originally a gift from Alberta to PEI, but the provincial government decided to offload the park in 2014 due to operating costs.

“In eastern PEI, it’s something that we all know,” Sanderson said. “It’s nice that we can maintain something like this.”