An article by Hozan Alan Senauke, who interviews monks in Burma about upcoming political and cultural change in their country. 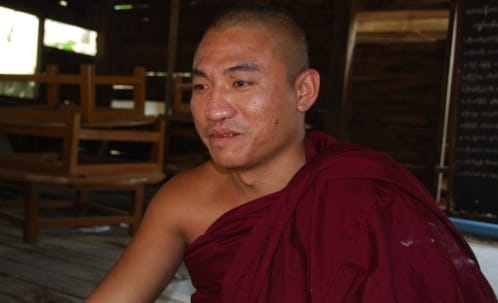 Maggin monastery, in Yangon’s eastern Thingangyun Township, was a refuge for hundreds of dissident Burmese monks during 2007’s “Saffron Revolution.” The Saffron Revolution began with local demonstrations against arbitrary and immediate price increases, which quickly became a national movement for democracy led by many thousands of monks.

On September 26 of 2007 the Burmese junta struck back. The military attacked many monasteries, ransacking Maggin, beating and arresting abbot U Eindaka and the other monks who had come for sanctuary. A refuge as well for local people with AIDS and HIV, these patients were simply driven from the premises, left to fend for themselves in the midst of the violent military crackdown. The monastery was trashed, wood doors and walls shattered, blood-stained robes tossed into corners, the gates padlocked and guarded by the junta’s watchmen. And that is how things remained for more than four years. 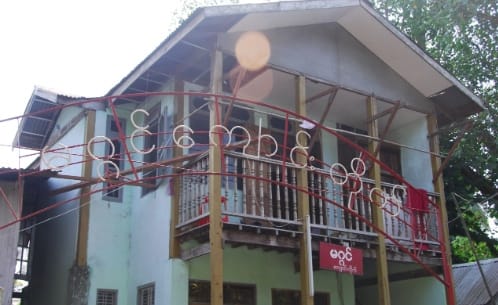 On January 13 three hundred political prisoners, including nearly forty incarcerated and disrobed monks, were released from prisons around Burma. The following day a group of monks, struck the locks from Maggin’s doors and moved in.

The prisoner release is one aspect of change taking place in Burma/Myanmar in recent months. How reliable or thoroughgoing a change we are seeing is still uncertain. The 2008 Constitutional referendum — conducted just days after Cyclone Nargis left 150,000 dead in southern Burma — reserves 25% of the assembly seats to the military, virtually guaranteeing their control of the political process. The 2010 election gave 129 of 168 elected seats to the junta’s proxy Union Solidarity and Development Party.  Another 56 seats, as mandated, went to the military, leaving only 34 seats to be divided among a dozen other regional and ethnic parties. On the military front, there is active combat in Kachin state, Shan state, and elsewhere, with more than 60,000 Internally Displaced People (IDP) living with war and deprivation in these areas

Nonetheless, some prominent reformers are being released from prison and limited political reforms are going forward. Daw Aung San Suu Kyi’s National League for Democracy is presently campaigning for seats in an April 1 by-election. Western nations, looking for signs of progress, are starting to consider diplomatic relations and a softening of long-standing economic sanctions against the regime.  The real question is how to view the process of change inside Burma. And how to urge this process along.

I met with three monks at Maggin (abbot U Eindaka, senior monk U Issariya, and Saffron Revolution leader Ashin Gambira) and Ashin Sandar Thiri at another monastery in mid-February. A week earlier Gambira had been arrested and taken for questioning by authorities investigating allegations of “squatting” at Maggin without registering with the Ministry of Religious Affairs, and breaking into two other monasteries in nearby in Bahan Township.

The same day we met, February 17, U Gambira dropped out of sight. The following day the state-run newspaper New Light of Myanmar wrote that: “The authorities concerned are taking legal steps to bring U Gambira to trial.” The New Light explained that Gambira, “…under complete political spell, has repeatedly broken Buddhist monks’ code of conduct and laws that every citizen need to abide by, in consideration of religion, Sasana (i.e. Buddhist teachings) and purity of Sasana.”  Maggin’s abbot, Ashin Eindaka, said, “I do not know where he is now. But I have seen today’s newspapers reports. When he left my monastery, it was still as a monk.”

A friend was kind enough to set up a meeting with the four recently-released monks. At Maggin monastery three of the monks were sitting with a handful of younger monastics and lay friends on the temple’s open veranda. The monastery comprises two buildings — an older wood frame temple dating back a hundred years, and a blue two-storey structure of cast concrete that already looks old beyond its years. As we talked workmen cleared rubble and ran blue plastic piping for water and electricity.

We took some time to get acquainted, to speak of mutual friends, and to create an atmosphere of safety given that I was a westerner and a new face. When I had been in Burma last November, with a lessening of restrictions and the first release of political prisoners, there was in the cities a kind of dizzying euphoria about the possibility of change. And an understandable attitude of wait and see. Three or four months later I felt that people in all sectors of an expanding civil society were getting down to hard and particular work, settling in for the long haul. Speaking with these monks, we quickly sketched out their collective sense of present circumstances in Burma. 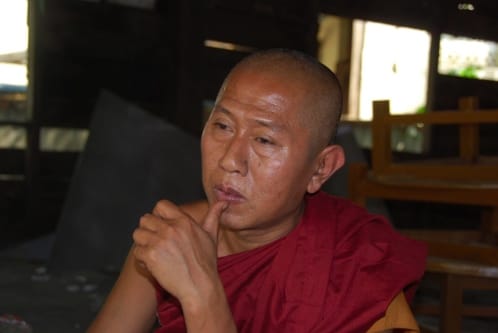 Speaking with the Monks

For the sake of confidentiality, comments below are not ascribed to individual monks.

Alan Senauke: What do you think about what’s going on in Myanmar now? Are there changes happening?  Do you believe that they are real?

Monks: (Laughter) No, no real change. The government is talking about changes, but the changes are very small.  There is so much left to do. There are still political prisoners. Many are left inside — forty-three monks in Mandalay, Insein, and other prisons. We know of others on the border who have gone to the U.N. refugee camps.

AS: Why do you think the government is releasing some prisoners?

Monks: They are afraid of the political changes. That’s why they had to release some of us. This government wants to make friends with Western countries and have the economic sanctions removed.

AS: So, does that give the monks and civil society a little power?

Monks: Outside countries may feel that this government is very polite. The new government and the old government are just taking off their uniforms and putting on civilian clothes.  After a few years, they may change.

AS: What do you think would help the process of change?

Monks: As you have said, we need peace in all of Burma. No war, no deaths. That would be the path to real democracy.

AS: What about the by-elections that are happening now? Are they important?

Monks: I don’t think it very important, because the military has already taken a big piece of the assemblies for themselves. They only allow small things. They are holding onto the economy and the army. Last time there was cheating on the election results.  But maybe this time there will not be cheating. Everybody is watching.

AS: Do you think a little choice and democracy is better than no choice?

Monks: Right now have only a small influence…We will all have to do politics.  Longing for change is not enough.

AS: What do you mean by “do politics,” what are the politics?

Monks: As monks, we don’t work for power, like other political parties. We are standing in front of the people, protecting the people.

Our time was limited, and this was my last day in the country. The conversation was just beginning, but simply to meet and talk is a radical act. As I was paying my respects to the monks, preparing to leave, one said quietly: “In the last twenty years we didn’t have such opportunities. We couldn’t speak with foreigners.” The opportunity for dialogue — all kinds of dialogue — is an encouraging sign. But it is not enough. Real change in Burma, or anywhere is a matter of access to resources, mutual accountability, and the power for people to determine the course of their own lives. When war has ended in Burma, when all the prisoners are free, when there are reasonable laws that apply to everyone — then we can start to celebrate.  Not yet.

Donations for the rebuilding of Maggin Monastery are much needed. If you would like to make a donation please go to www.clearviewproject.org or send a tax-deductible check to Clear View Project, 1933 Russell Street, Berkeley, CA 94703. I will make sure your gift gets to the right people. If you have questions, write me at <[email protected]>