Sonoma Mountain Zen Center and Abhayagiri Buddhist Monastery were both threatened by the wildfires, but now seem to be safe from major harm. 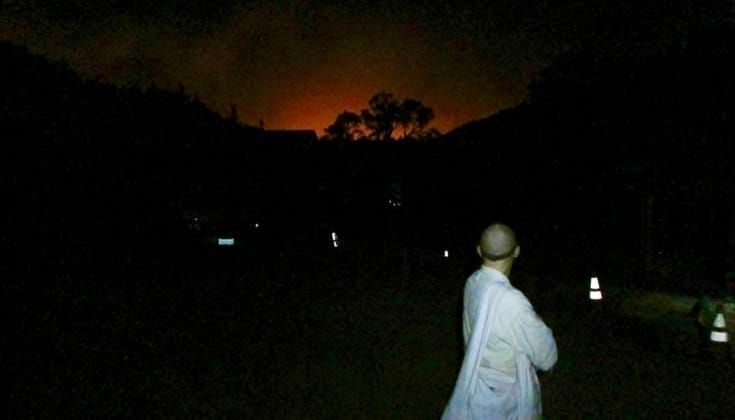 Fire in the distance as residents evacuate Abhayagiri Monastery in the middle of the night. Photo via Abhayagiri.org.

Around 2 a.m. on Monday morning, 14 monks and 12 guests at the Abhayagiri Buddhist Monastery evacuated to escape the Redwood Valley fire—one of many uncontained wildfires raging through northern California.

Amidst the sounds of air horns and exploding trees, the group headed north to safety.

The Abhayagiri community, which practices Buddhism in the Thai Forest tradition of Ajahn Chah, is currently staying at the City of Ten Thousand Buddhas in Ukiah. They ask for no visitors at this time, as Ukiah has been heavily impacted by evacuations.

While reports from fire authorities suggest that the main buildings of Abhayagiri are undamaged, the condition of the monastery — which just celebrated its 20-year anniversary — is still unknown.

Low relative humidity and high wind speeds may change the course of the fire very quickly. With that in mind, officials are not allowing people back into the area at this time.

On Wednesday night, scouts and a bulldozer from the Bennet Valley Fire Department dug a trench partway around the Zen center, which stopped the fire. Residents worked overnight to clear bushes and fallen trees.

On Thursday, the Sonoma Mountain Zen Center posted an update on Facebook:

We are very positive that everything will be fine now. We thank everybody for their concern. There are enough people helping on site. We should be good and there is no need for more people to come and help right now. We will keep you posted.

As of Friday, fires have scorched more than 190,000 acres of land in northern California, leaving 31 people dead and around 3,500 structures destroyed.

There are still 20 active blazes, some of which mark the deadliest on record in the state.