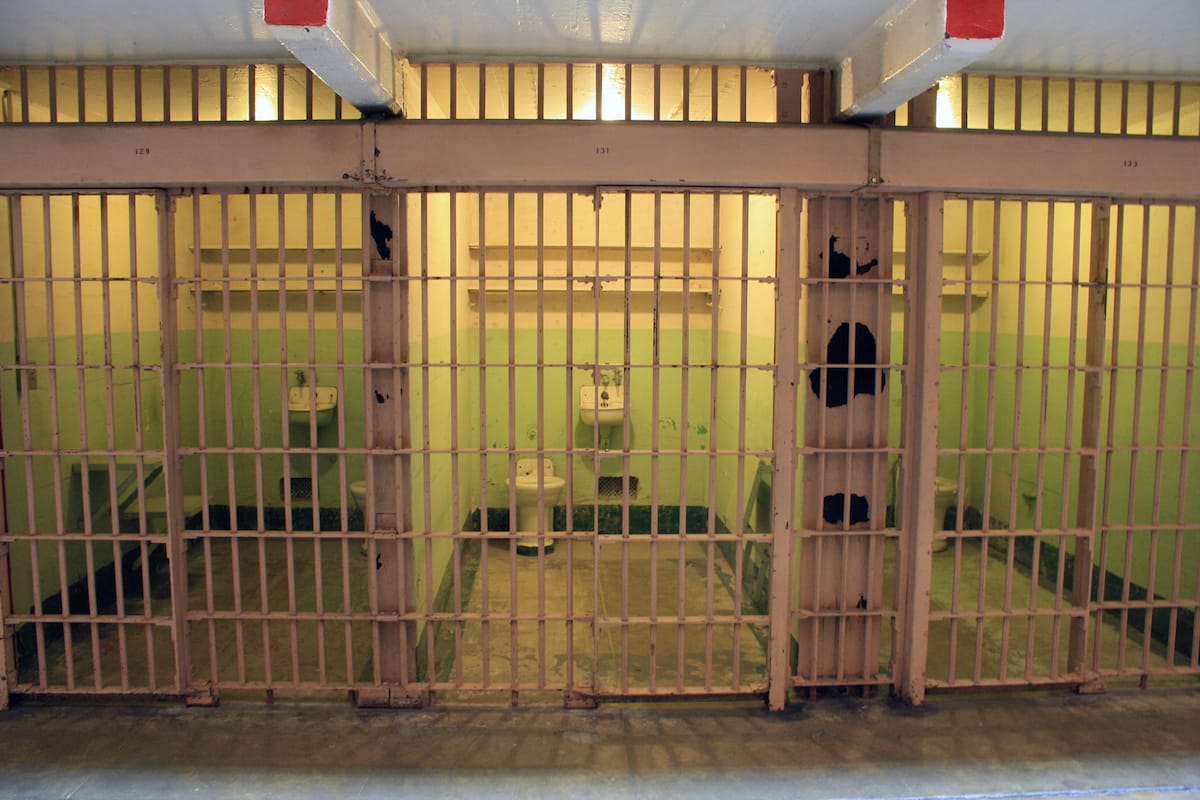 Prisoner Timothy Burke on how Buddhist meditation has been helpful in finding peace — and deepening his understanding of Christianity.

This prison in southwest Ohio is of old design, laid out as one long corridor with housing blocks and secondary annexes attached to its sides. The main hallway, like an artery, feeds the branches: the chow hall, library, medical office, mailroom, chapel, and so on. The cinder block walls are industrial white with orange stains revealing the spots where pepper spray missed its mark. Every fifty to one hundred yards, red metal crash gates stand ready to close the hallways in case of a riot.

For an inmate to be out of his block he must have a Class A pass, be in transit to his designated chow or recreation period, or be heading toward an Open Call activity, like Sunday morning worship service. I was on my way to my first Open Call Bible study when I met David Loy.

When I’d been arrested, my world imploded and there was nothing for me to cling to. I went through a phase of catatonic staring, I lost my appetite, I was hopeless and contemplating suicide. My life was swirling around the bottom of the bowl.

In county jail, I went to a worship service, my first in twenty years. I was invited to accept Jesus as my savior and I did. It saved my life. I invested myself in reading the Bible and rebuilding my life.

Reading the New Testament, I wondered why Jesus’ message took a different direction. I’d heard some guys mention theories about Jesus traveling east during his eighteen year “absence,” and was hoping to learn more about it when I entered the school area looking for the Bible study.

The school’s interior walls are constructed with lots of windows for security. Through the nearest classroom’s Plexiglas I saw three outside guests, but no inmates. I knocked on the door. When one of the men answered, I asked if this was the Bible study.  He smiled and said they were Buddhists — they didn’t teach out of the Bible. I paused, thinking about the distinct change in New Testament scriptures, thinking about those mysterious missing years…”Buddhists, huh?  Can I ask you a few questions?”

They were the questions of the absolute beginner: What is Buddhism? Who was Buddha?  What is Nirvana? How do you get enlightened? I had David and his colleagues Tina and Jeff to myself that day and I made the most of it. They were blissfully patient. We touched on the possibility that Jesus had been influenced by an eastern practice. We discussed Neale Donald Walsch and Joseph Chilton Pierce, then David gave me some basic instruction in breath-counting meditation and we sat.

I tried really hard to become Enlightened but it just didn’t happen. I had imagined myself basking in some peaceful, idyllic trance, but instead my mind went berserk, bouncing off the walls like some aerosol-huffing monkey on a pogo stick. Still, I was hooked!

A few days later I asked the chaplain to sign me up for Buddhist Meditation. He gave me one of those looks, over the top of his glasses. He’d known me as a Christian and member of the church choir; suddenly my faith was in question. To be honest, I wasn’t sure what studying Buddhism would mean for my walk in faith, but I felt it was a way to better understand Jesus’ teaching. Buddhists get this, but some Christians might not.

In the following weeks I met the rest of the sangha, an eclectic bunch of guys. I became more familiar and more comfortable with the chanting, bowing, and rituals of the class. But most importantly I began to love the study and practice of the Buddha’s teachings. I found that they enhanced my Christian practice and deepened my understanding of Jesus’ message.

I was excited and enthusiastic and naïve; I shared my “discovery” with some of my Christian “brothers.” They force-fed me scripture, told me I worshipped idols, and said I was possessed by demons. I realized then that I had threatened their beliefs and put them on the defensive.  Their reactions revealed insecurity, uncertainty, and fear.

I felt a similar fear in my early meditation, peeling away the layers of self and finding nothing at the center.  A big part of my practice, my faith, is learning to trust in that, to see that my self-lessness doesn’t separate me from anything, but unites me with everything.

Dr. Loy (who winces when so addressed) has written eight or so books on Buddhism and the ways we interact with it. He is the Professor of Ethics/Religion at Xavier University. He is internationally renowned and commissioned for conferences, lectures, and workshops. The list of his distant teaching venues reads like a departures board at Kennedy International: Japan, China, South Korea, Thailand, Malaysia, Singapore, Canada, Peru, Australia, Ireland, South Africa, Israel, Argentina, Chile, Brazil, the UK, Belgium, Paris, Budapest, Copenhagen. Yet every possible Wednesday, David leads our sangha in this Level Three prison.

I don’t have to imagine the difficulties he and the others encountered while working to introduce a Buddhist meditation program within this prison; convincing a “hesitant” fundamentalist Pentecostal Religious Services Coordinator to consider the proposition, submitting credentials, and undergoing background checks. It became a five-month process. The same levels of scrutiny are not applied to others. I attended a worship service led by an ex-con from this prison who read from crumpled notebook pages. He said he was driving by and felt compelled to share the Word.

Fortunately, David Loy is well-equipped for interactions with difficult people. After forty years of practice he has developed a sort of benign, matte-finish charisma that makes defenses unnecessary.  His humility, too, is disarming, and he spends no energy trying to seem threatening.  When taken as a whole, the general effect of his exterior is camouflage: his face is hidden behind a beard, his attire is instantly forgettable, and his hair is coiffed in such a way that it defies any classification or style. David’s look secures his candidacy for the premier cover of Wilderness Librarian magazine.

And on his writing, he handles heavy ideas with confidence, dexterity, and control. Still, I find the reading difficult. Not the kind of difficult normally associated with painted-shut windows and rush hour traffic, but the kind of difficult akin to climbing Kilimanjaro or learning a new language. The kind that gives its rewards in proportion to the diligence invested. The kind we honor with a new name: we call it a challenge.

What I’m starting to realize is that people, like prisons, have layers of defenses: that distorted perceptions are in place to protect something we value, even if it doesn’t really exist. I struggle with the material because I am trying to overcome my self. I am trying to lift the chair on which I am sitting.

Like the bittersweet chocolates David craves, some of his writing is so rich that a few bites are enough for one sitting. I took months reading The World is Made of Stories.  In my current re-re-reading of Money, Sex, War, Karma, I’m marking passages that snag me, then leaving them alone for a while. When I read the chapters again they make sense. Of course, they always made sense. I didn’t.

A poignant story: The sangha had just read Thich Nhat Hanh’s story of a child asking him the color of a tree’s bark. He pointed to the tree saying, “It is the color that you see.” David took this one step further and pointed at the book saying nothing. We students became contestants in a game of charades, trying to guess what he was showing us. Meanwhile, David only smiled and pointed. He was trying to tell us to accept the object and our experience with the object, without running it through our filters, to just be with it as it is, as we are. When I finally understood, and shut up, and became still, David noticed. It was a valuable lesson.

We end our classes with seated meditation, and we end our meditation by reciting the Bodhisattva’s vows:

Like so many things Zen, it’s a statement of impossibilities and it doesn’t make any damn sense.  How is anybody supposed to become enlightened using this foolishness?

Then, “TING” there it is — the elusive obvious, the one David was pointing at, grinning — this idea that there is no “self,” an idea which can only be known because there is a self that knows it.  It can’t happen, yet it does happen. I missed it because I was looking for an answer and it’s not an answer, it’s a way of being.

David is moving to Colorado for a fellowship at Naropa University. Such are the ways of impermanence. But thanks to him I am starting catch on.

I’m also starting to understand why David applies himself to the vows, living them diligently and with integrity. He lives them because he knows the miraculous, magical, and beautiful impossibility that each of us is, and though it’s impossible, he wants each of the numberless sentient beings to see it, too.