The Chinese government has enacted new policies that require Tibetan monastics to promote the Communist Party. 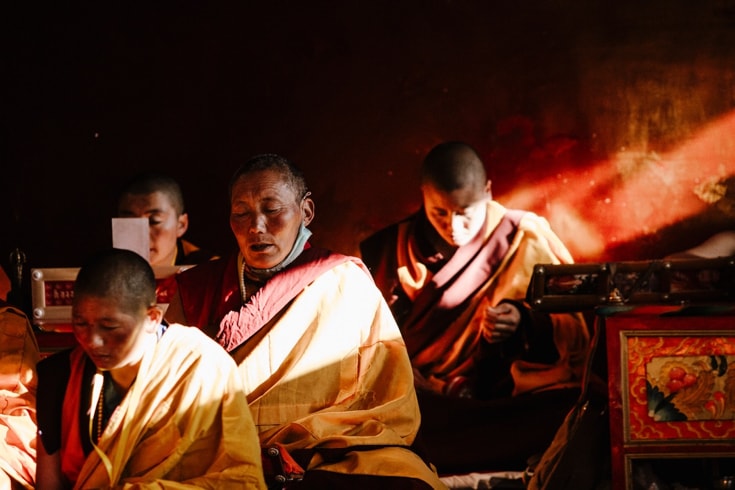 Monastics at Yarchen Gar — one of the largest monasteries in the world — in Tibet. Photo by Lee Bernd.

Under these policies, Tibetan monks and nuns must demonstrate “political reliability,” “moral integrity capable of impressing the public,” and a willingness to “play an active role at critical moments.” HRW reports that these requirements are designed to create Buddhist teachers who are proficient in state ideology.

This spring, a group of Tibetan monastics were selected to attend a three-day training session to “strengthen their political beliefs.” As reported in the Chinese state paper the Global Times, recruiting Buddhist monastics to promote the Chinese government is an effective tactic because they have a working understanding of the thoughts and habits of the people they serve.

HRW also reports that this current strategy is part of a larger “sinicization of religion” policy in China that allows government officials to manage religious institutions. This allows government authorities to reshape religious doctrine based on its compatibility with socialist values.

In 2012, the Chinese government established an elite Tibetan Buddhism Higher Studies Institute to train chosen Tibetan monks and nuns. The institute is designed to produce a generation of “patriotic religious professionals” qualified in religious studies and committed to the party’s ideology.

Recently, authorities established a state-run academic program to train Tibetan monks for the Geshe degree — the highest academic qualification in Tibetan Buddhism — which resulted in the exclusion of those with Geshe degrees from monasteries in India from teaching at monasteries in Tibet.

“Authorities’ injection of political dogma into religious curriculum and new requirements that monastics indoctrinate one another reflect Beijing’s hostility to the freedom of religious belief,” Richardson said.

HRW reports that doctrinal reformation is currently applied to all organized religions in China, but it is strongest in Tibet where religious identity is considered a threat to national ideology.