Bhikkhu Bodhi responds to US President Donald Trump’s decision to pull out of the Paris Climate Agreement. 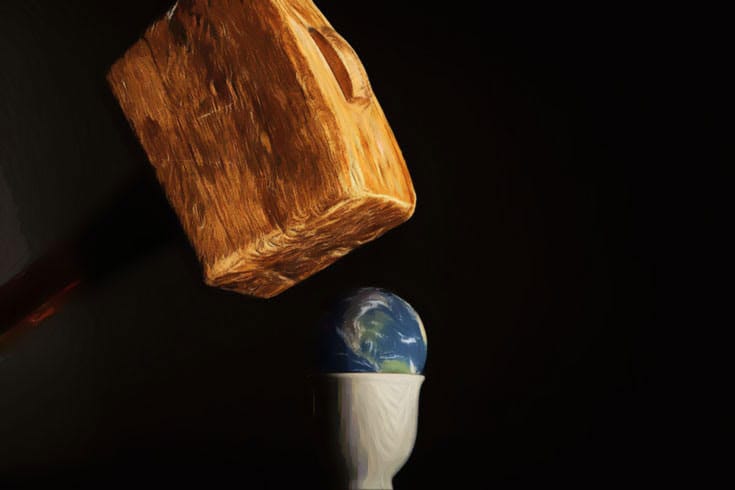 Much has been written over the past couple of weeks about the political and economic repercussions of Trump’s decision to pull the U.S. out from the Paris Climate Agreement. It’s been pointed out that the decision will diminish our standing in the world and cast us in the role of a rogue state, a pariah among nations. Our economy will languish, overtaken by other countries that make the leap to full reliance on clean energy. The mantle of global leadership will pass to Europe and China, and we’ll find ourselves increasingly isolated on the international stage. To be an American abroad will become a mark of shame.

The decision is cruel because it reveals a glaring deficit of compassion.

The decision to leave the Paris Accord, however, should be seen not only as an act of foolishness, arrogance, and delusional thinking, but also as an appalling expression of cruelty. The decision is cruel because it reveals a glaring deficit of compassion—a callous lack of concern for the billions of people around the world who are endangered by a more hostile climate. Sadly, it is those nations and peoples with the lightest carbon footprint that are being hit the hardest. Even before freak weather events began to multiply and inflict horrendous harm, smallholder farmers and day laborers in the developing world faced an uphill struggle just to put food on the table and get enough clean water to meet their daily needs. Now, assailed by ever more frequent and destructive climate disruptions, these same people find their very lives suspended over an abyss.

As I write, Sri Lanka, the country where I lived for over twenty years, is reeling from floods that have turned streets into angry rivers, driven half a million people from their homes, and brought hills crashing down on top of the people who lived on their slopes. Parts of Pakistan are experiencing temperatures that have soared past 120° Fahrenheit, heat waves that claim the lives of the poor, elderly, and frail. Large swaths of farmland in sub-Saharan Africa and South Asia have been transformed into desert, no longer able to sustain their populations. Four countries border on famine—South Sudan, Somalia, Yemen, and northern Nigeria—partly because of political turmoil, but also because of climate change. In some regions, beset by long droughts, crops shrivel up and livestock drop dead. In others, once lush fields are invaded by hordes of rapacious pests, which find the newly warmer climate a congenial home.

When we take in the total picture, the conclusion is clear. Accelerating climate change will condemn hundreds of millions of people to an early death, either swiftly through sudden disaster, or slowly and painfully through hunger and malnutrition. Fragile countries will be rocked by social instability, giving tyrants the chance to grab power, breeding terrorism, and sending millions in flight across seas and deserts in search of better living conditions. Is this the kind of future we want for the men and women who share this planet with us?

It is the responsibility of the global community, as inherent in our humanity, to protect the poor and vulnerable, to ensure they can live with dignity in their own lands, enjoying an acceptable standard of living. To achieve this goal it’s imperative that we cut carbon emissions as swiftly and sharply as we can in order to prevent global temperatures from rising past 1.5° Celsius above the pre-industrial average, at which point climate calamities will rapidly increase. The Paris Agreement was weak, flawed, and inadequate, and we are already half way toward the 1.5° mark. But for all its shortcomings, the accord has been a step in the right direction. It serves as a starting point that can be built upon and strengthened as the signatories begin to see the benefits of switching to a post-carbon economy and also, hopefully, as their sense of social responsibility extends beyond their own borders to those whose lives are most gravely threatened.

To become disheartened and passively accept the new wave of climate policies would be to play right into the hands of those who want to force us into submission.

Trump’s decision, however, turns a deaf ear to the demands of reason and the call of compassion. It even snubs the principle of enlightened self-interest, which tells us that our economy will thrive and good jobs increase with the full-scale transition to renewable energy. Defying the decrees of moral conscience, it imposes a merciless death sentence on the millions who will die because the U.S. denies them the aid they need to adapt to a harsher climate. When it comes to boosting military spending, we have no trouble finding hundreds of billions of dollars to be wasted in fighting futile wars. But when it comes to helping those desperately in need, suddenly our treasury is empty. Yet which policy will make us truly safer: engaging in military operations all around the world or adopting a policy of global generosity by which we share vital resources with others?

The U.S. withdrawal from the Paris Accord may leave those of us who invested time and energy mobilizing for a sane climate policy confused and dismayed about the future—about our own personal futures and the future direction of the planet. While it may take us time to recover from the shock, we should not lose hope. To become disheartened and passively accept the new wave of climate policies would be to play right into the hands of those who  want to force us into submission. It would simply give them a signal that with enough bluster they can get their way. Rather, we must be prepared to stand up even more defiantly, to resist with greater courage. In this we can draw on the strength of our numbers, the righteousness of our cause, and the recognition that the transition to a post-carbon economy is the only way to preserve a natural environment conducive to human flourishing.

While our chances of changing federal climate policy may be slim as long as Trump and his cohorts remain in power, there are still several lines of action open to us. One is to become more politically aware and support only candidates who recognize the dangers of climate change, make it a pivot of their campaigns, and pledge to act effectively to reverse course. All candidates for office—from the federal level to the local level—must be closely examined and pressed to reveal their positions. Only those who, without deceit and distortion, acknowledge the hard truths of science and endorse the move toward a clean-energy economy should receive our support and our votes.

If we have the trust in the rightness of our cause and remain undeterred, we too will triumph and in the process make America truly great again.

A second line of action is to actively oppose new fossil fuel projects clear across the country. Such action can take various forms: signing petitions, writing to our representatives, joining protests and marches, and directly obstructing the construction of new fossil fuel infrastructure. This last option poses risks, since the fossil fuel corporations have been mobilizing police and hiring security firms to attack dissenters, even painting them as terrorists; they have also resorted to severe legal action to discourage those who would oppose their projects. But earlier movements on behalf of social justice—particularly the civil rights movement of the 1960s—also had to face harsh penalties and brutal crackdowns. By pressing ahead, they eventually prevailed. If we have the trust in the rightness of our cause and remain undeterred, we too will triumph and in the process make America truly great again.

To make America great does not mean to abdicate our global responsibilities and close in upon ourselves, self-absorbed and suspicious of others. It means to become a nation great in wisdom, great in compassion, and great in moral leadership. Remaining in the Paris Agreement and strengthening its commitments is essential if we are to rise to this challenge.