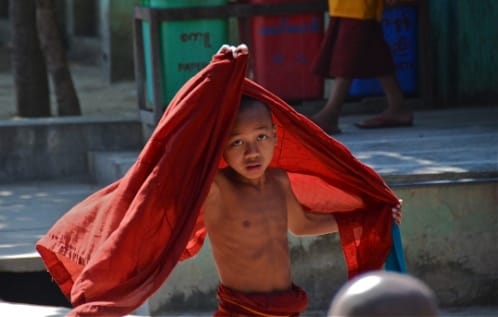 Hatred is never appeased by hatred in this world; by non-hatred only is hatred appeased. This is an unending truth. — Dhammapada, 5

Religious and ethnic confrontation in Burma challenge cherished ideas of Buddhism and religious tolerance. This week, two days of violence between Buddhists and Muslims in Lashio — the largest town in Burma’s Shan State, near the Chinese border — have left a mosque, an orphanage, and many shops destroyed by Buddhist-identified mobs roaming the streets on motorcycles. Three hundred Muslims have taken refuge in a local Buddhist temple, thousands have fled, and the count of dead and injured is still not clear.

To make matters worse, on May 25 authorities in Rakhine state announced a policy imposing a two-child limit on Muslim Rohingya families in two western townships, reinforcing the perception of ethnic cleansing in Burma. This alarming policy is the only known legal restriction of its kind today against a specific religious group.

“If true, this is against the law,” said Suu Kyi, the opposition leader and Nobel Peace Prize laureate. Suu Kyi has faced criticism for failing to defend the Rohingya following two waves of deadly sectarian violence last year. She told reporters Monday that she had not heard details of the latest measure but, if it exists, “It is discriminatory and also violates human rights.”

Undoubtedly there has been violence on both sides. This week’s rioting in Lashio began when a Muslim man attacked a Buddhist woman shopkeeper. But in each of these instances the preponderance of organized reaction seems to be Buddhist-identified, often with leadership from monks, and with response from the government and the Burmese army only after damage has been done. Local people often describe the military as standing by and just watching as the destruction unfolds.

The roots of this conflict are hard to untangle. They go back decades to the period of British colonial occupation and before. But the current conflict also speaks to a scarcity of land and economic resources that manifests as communal hostility.  One wonders, too, whether we are seeing garden-variety religio- or ethno-centrism, a disease of group identity and privilege that is sadly endemic among humans?  Is there also a perverse political motivation, in which the former military junta is “allowing” the violence so they can intervene and reassert their position as the agent of social order in Burma?

Considering the Rohingyas in Rakhine state, they have lived in Burma in Rakhine state for generations, if not for several hundred years. The former military regime’s 1984 law excluded them from among the nation’s 135 recognized ethnicities, denying the Rohingyas citizenship and basic rights.  Neighboring Bangladesh, a predominantly Islamic country, also denies citizenship to Rohingyas presently living within its own borders.  It is not surprising that the United Nations views the Rohingyas as “one of the world’s most persecuted minorities.”

Burma, or Myanmar, is still in a delicate transition to democracy after fifty years of military dictatorship. The current 2008 constitution reserves one quarter of the seats in both legislative bodies to delegates from the tatmadaw/military.  It is hard to imagine Burma going back to its dark ages, yet within recent memory we can recall the dissolution Yugoslavia and Czechoslovakia into ethnic and religious enclaves when soviet-style dictatorship ended.  I hope for better in Burma.  And look to the government of Burma, including President Thien Sein and Daw Aung San Suu Kyi to play an active and nonviolent role in resolving conflicts between Buddhists, Muslims, and all ethnic groups. Central to this resolution is a guarantee of citizenship, human and religious rights to all Burma’s diverse inhabitants.

Although we have seen the rise of so-called Buddhist nationalism in Burma, with organizations like “969” spreading fear and hatred, and prominent monks like Ven. Wirathu preaching against a far-fetched Muslim mission to take over the country, there are countless open-minded citizens and monks who simply desire peace and harmony. May they have the courage to speak out.

Shakyamuni Buddha lived in a place and age of great diversity and change. He never taught fear. He never advocated violence. He did not hesitate to speak out for what was right and just.  I would hope that Buddhists of today, whether they are in Burma or the West, would hold themselves to the same high standard. May all beings live in safety and happiness.