Following the police killing of Daunte Wright in Minnesota, Constance Kassor examines how calls to defund the police can be linked to the Buddhist call to eradicate causes of suffering. 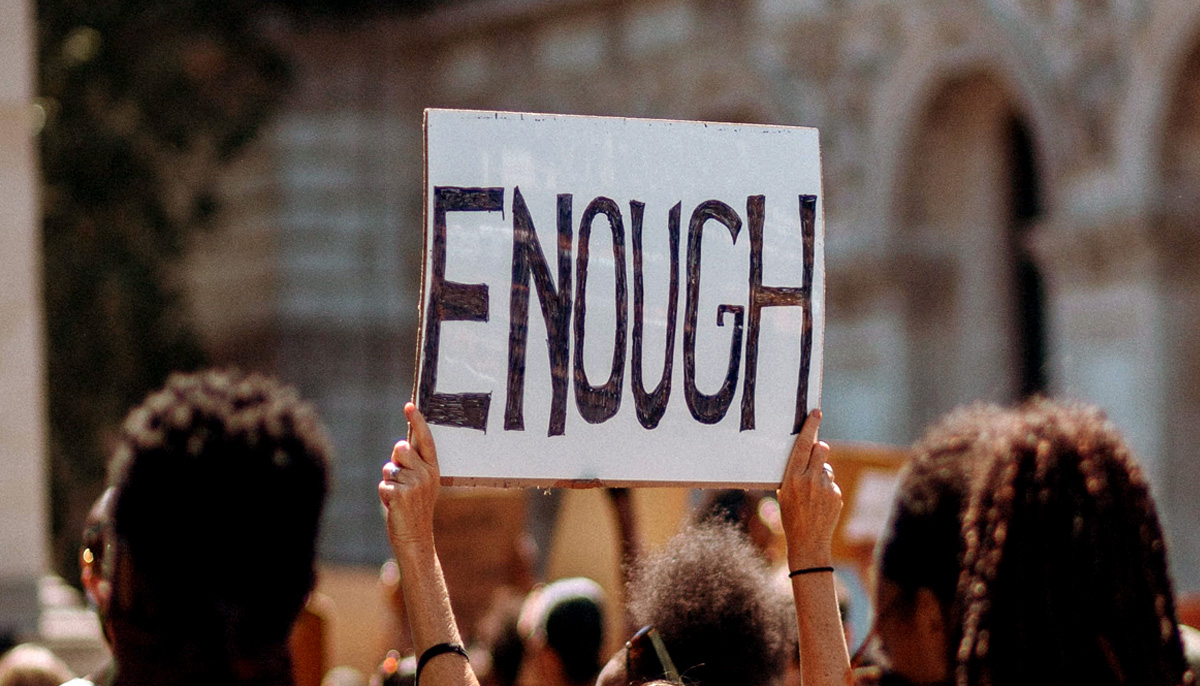 As protestors gather in Minnesota to demand justice for Daunte Wright, calls to defund (or transform) the police are once again being made. These calls for transforming existing structures of policing can be considered closely linked to Buddhist ways of thinking, which advocate for the eradication of the causes of suffering.

The Buddha’s first teaching, the teaching of the Four Noble Truths, explains that suffering has specific causes, and that in order to eradicate suffering, the causes of suffering must be eliminated.

The problem is bigger than individuals. It is structural. It is systemic.

The point of this parable is obvious: the man who has been shot is focusing on the wrong things. The real cause of his suffering is the arrow, and the solution is to remove it as soon as possible. If the man continues to ask questions, rather than let the surgeon remove the arrow, he will die.

While this parable is usually invoked to highlight the futility of asking certain kinds of metaphysical and philosophical questions, the main point is similar to the teaching of the Four Noble Truths: if you’re not directly addressing the causes of suffering, then you’re wasting your time.

In Minnesota, protests of Daunte Wright’s murder are happening at the same time as the trial of Derek Chauvin, the police officer who kneeled on George Floyd’s neck for 9 minutes and 29 seconds. These events follow closely on the heels of the murder of Philando Castile, the Black cafeteria worker who was shot by a police officer during a traffic stop. In Minnesota, as in so many other places around the US, we see a very specific kind of suffering on full display.

Such actions are necessary, and officers involved in these incidents must face the consequences of their actions. But these actions alone are not solutions to the bigger problem. Black men continue to be murdered by police. If we view this problem through a Buddhist lens, the reason that these solutions don’t work becomes clear: these proposed solutions are not addressing the root causes of this specific kind of suffering.

Buddhist teachers often compare the removal of the causes of suffering to weeding a garden: If you only remove the part of the weed that is above the surface of the dirt, the weed will keep regrowing over and over again. In order to remove the weed entirely, you must dig deeper, and pull the weed out by its roots.

Similarly, in these instances of police officers unjustly murdering Black people, the solution must go beyond suspending, firing, or trying individual officers. To do so is to simply remove the top of the weed. While these proposed solutions might address a particular immediate instance of suffering, they do nothing to address the deeper root causes of suffering. These instances of police violence are the manifestation of suffering, but the causes of that suffering are deeper and more systemic.

In the United States, we have developed and perpetuated a system in which police continue to murder Black people because they can. We have created and allowed structures to exist in which police have the power, authority, and protection to behave in the ways that they do, with minimal consequences.

In order to eradicate the very specific kind of suffering that manifests as police violence, we must eradicate the causes of this suffering. Specifically, we must dismantle the structures of policing that we have allowed to exist and have enabled to thrive in this country.

On average, a police officer only needs 13-19 weeks of training in a Police Academy before they are allowed to wear a badge and carry a gun. That’s somewhere between 3 and 5 months. For a high stress, high stakes career in which people’s lives are at stake, this is an abysmally short period of time. Imagine if a surgeon only had 3-5 months of training before being allowed to wield a scalpel in the O.R. Imagine if your auto mechanic only had 3-5 months of training before attempting to replace your transmission.

The problem – the specific causes of this particular kind of suffering that show up as police violence against Black people – is not individual police officers. There are, of course, officers who abuse their power and who should be held accountable for their actions, but I genuinely believe (or at the very least, hope) that many police officers are in their jobs because they want to help the people in their communities, and they want to do so responsibly. The problem is bigger than individuals. It is structural. It is systemic. It is grounded in the fact that we allow people with minimal training to carry lethal weapons, and then we expect them to perform tasks that they are not equipped to handle.

This is why defunding the police is necessary. Taxpayer money that goes toward giving the police armored cars and robot dogs ought to be redirected toward trained social workers, trained mental health professionals, trained substance abuse counselors, and trained advocates for the homeless, so that they can deal with the vast majority of 911 and other police calls. This will result in a police force who are less stressed and less overworked, who are better equipped to deal with stressful situations, and who will not murder fellow citizens.

Our Black, Brown, Indigenous, Asian, and other BIPOC neighbors are suffering right now. In order to truly help them, we need to address this suffering at its roots. To fail to do so is to be complicit in perpetuating suffering in our communities.

Constance Kassor Ph.D. is an assistant professor of Religious Studies at Lawrence University in Appleton, Wisconsin, where she teaches courses on Buddhist thought and Asian religious traditions, with a special interest in how Buddhism relates to questions of social justice and gender. She is the creator and voice of Religious Lessons from Asia to the World, a ten-part program on Audible. For more information visit constancekassor.net