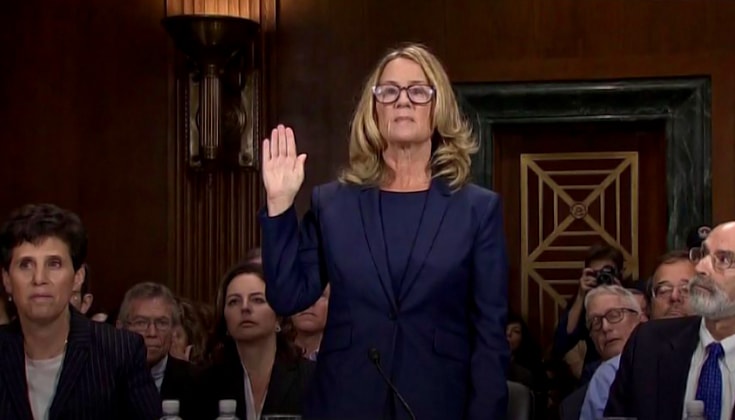 Last night I said a service, or chant, invoking compassion and healing for 150 victims of sexual assault. These are our daughters, sisters, mothers, sons, brothers, and, yes, mostly ourselves. After the convulsive end to Thursday’s Senate hearing, I felt like I’d been run over and left for dead. Women were not going to be heard or believed. Nothing would ever change. Then I remembered what my teacher said about those times when we think we can do nothing: We can always do something. I asked for the names of sexual assault victims from among my friends on Facebook, and before the sun went down, I lit incense and chanted their names, or for privacy, their initials.

Christine Blasey Ford changed everything on Thursday. Maybe not in the way I thought at first. Maybe not in the way I’d hoped after her painfully honest answers. Beforehand, one expert said she needed to appear unassailable to be a good witness. When I was live-streaming the hearing first thing in the morning, my husband passed by. “How’s she doing? Is she good?” And I said no, she’s not good. She’s nervous. She’s wounded. Her voice is high and cracking. She sounds like a 15-year-old. When she told the prosecutor how the experience had affected the rest of her life—the anxiety, phobias and panic attacks—I recognized the voice.

In the US, 30 percent of women will experience some form of sexual violence in their lifetime. Today it feels like 100 percent.

It was the voice of a girl crying late one summer night about what a boy had forced her to do. Her fear and shame after. Feeling ugly, unwanted, and abnormal. The self-harming, anxiety and panic attacks. No longer belonging. Unable to trust. Being so different than she used to be, with no idea who she was supposed to be.

I hadn’t really put it together until Dr. Ford spoke. I hadn’t known it was one true thing: the trauma of being physically overpowered and dehumanized.

By now I’ve also seen the very same person do brave and big things, finding the seed of faith in herself. I’ve seen her give her whole heart to what she loves, and surprise everyone with her secret strength.

In the US, 30 percent of women will experience some form of sexual violence in their lifetime. Today it feels like 100 percent.

This article was originally posted on karenmaezenmiller.com under the title “doing something.”