It takes training to realize we’re all responsible for the continuation of the dharma, says Cristina Moon. 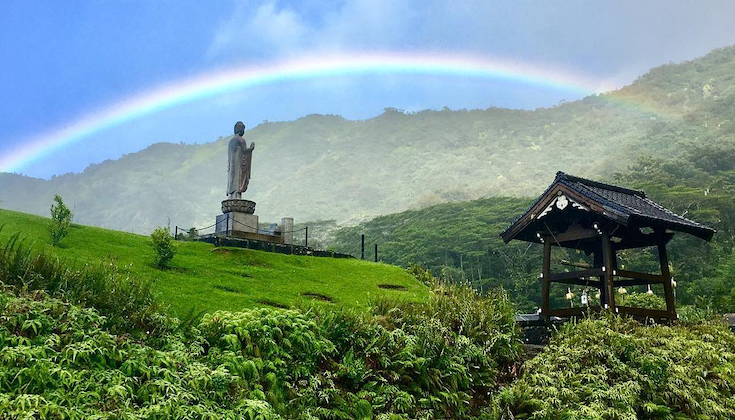 Recently, I find myself talking a lot about the value of non-transactional relationships for spiritual transformation and community-building. At Chozen-ji, the Zen temple and dojo where I live, in Hawaii, we consistently surprise visitors when we tell them that the many classes here — in martial arts, fine arts and zazen (seated meditation) — are offered without fees.

Really, it’s quite straightforward. We’re here to be place for people to do shugyo, “the deepest spiritual self-discipline”. How can we do that — making people sit long zazen sessions with throbbing knees, pushing people to surpass their self-imposed limits — when someone feels like we owe them something?

When we go to, say, a yoga class and plunk down payment, we have an expectation of receiving something in return. Our idea of what we’re supposed to receive is often pretty specific: I give you $20, you give me 45 minutes of the Ashtanga Primary Series. Or Yin Yoga. And don’t muddy the two!

One way that spiritual institutions have tried to reframe the transactional relationship is by relying solely on donations. Churches call them “gifts.” Similarly, the concept of “gift economy” has become popular in recent years. Meditation centers and yoga studios talk about donations in terms of dana, the Pali and Sanskrit word for generosity. They give dana talks to explain the dana financial model, and the practical and karmic importance of being generous.

Responsibility is nothing more than the ability to respond. Very little, then, falls outside the realm of one’s responsibility.

At Chozen-ji, we intentionally say little about donations. Even the donation box in the dojo is unmarked. Part of why we don’t charge money to do shugyo is to make it available to anyone who wants to do it. Another is that, if you’re doing shugyo at Chozen-ji, you should be cultivating two things: strength and also sensitivity.

Sensitivity starts with paying attention. To how to leave your shoes at the door. To mealtime etiquette. To the sound of the wind. To someone else’s pain when they haven’t said a word. At Chozen-ji, we use forms — like etiquette but also martial and fine arts — as a training regimen for developing a deeper kind of sensitivity, a heightening of the senses and perception.

To develop this kind of sensitivity, one must pay attention very actively—even aggressively. When observing a master, capture their bearing and even the smallest of movements. When speaking to a Roshi, listen as if it’s possible to steal the secrets of awakening. When students develop this sensitivity, the donation box doesn’t require a sign. A student who has trained that deeply doesn’t need a dana talk to understand why they should take responsibility for their community. They are already taking action to return the deep generosity they have received. They have been training to be able to intuit a need, and respond appropriately and without thought.

Chozen-ji’s abbott, Sayama Daian Roshi, often emphasizes the importance of taking responsibility. Responsibility, he says, is nothing more than the ability to respond. Very little, then, falls outside the realm of one’s responsibility. Zen students who understand this take responsibility for Chozen-ji—teaching, caring for other dojo members, preparing food, working the temple grounds, and raising and giving money.

I’ve heard that Chozen-ji founder Tanouye Tenshin Roshi was once encouraged by a student to charge money for training so students would value it more. His response was that if he charged what the training was worth, nobody would be able to afford it.

I’ve also heard that, when he did receive a donation, Tanouye Roshi would not say “thank you”. Instead, he’d look someone in the eye and say “you’re welcome.”