Khin Mai Aung reports from the International Conference on Protection and Accountability in Burma, which called attention to the ongoing human rights violations against Rohingya muslims and other religious minorities in the Buddhist-majority country of Myanmar. 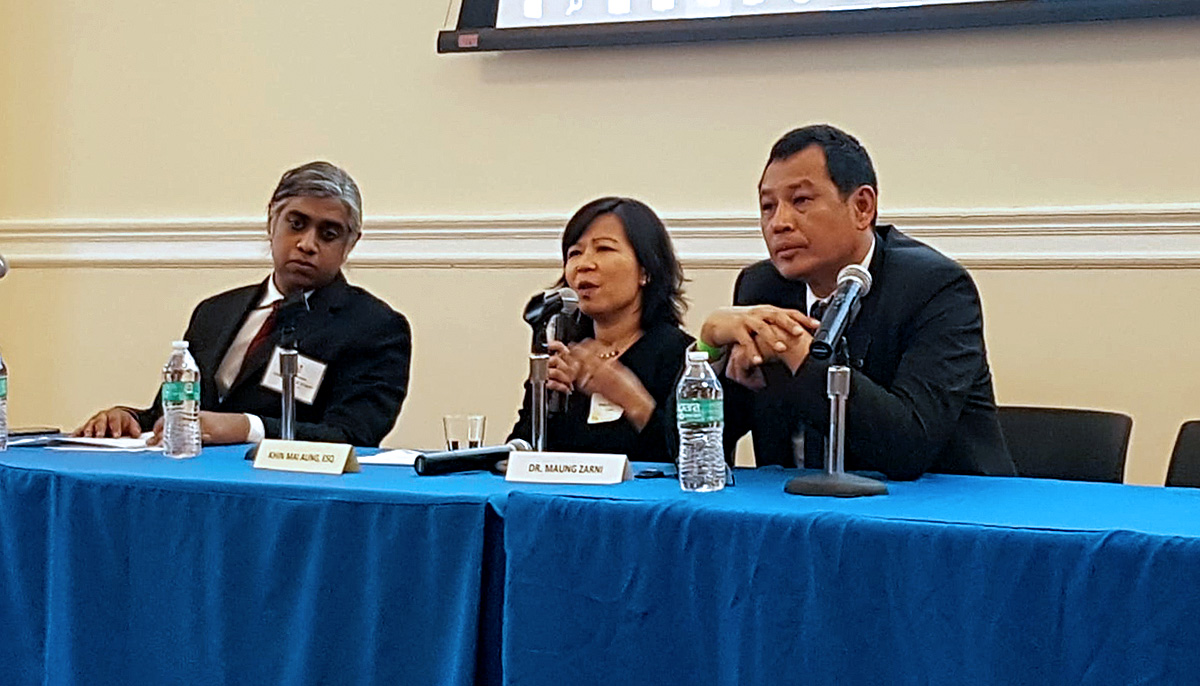 Khin Mai Aung (center) at the International Conference on Protection and Accountability in Burma.

On February 8 and 9, the Free Rohingya Coalition – a global advocacy group led by prominent Rohingya activists and allies – hosted the International Conference on Protection and Accountability in Burma (now called Myanmar) at Barnard College in New York City. The conference — at which I was an organizer and a speaker — sought to raise awareness about “the twofold need [for] protection and accountability” for the human rights of Rohingya and other minorities in Myanmar. Scholars, lawyers, activists, and United Nations officials gathered at the convening to identify strategies to curb serious human rights violations in Myanmar, which include discrimination against ethnic and religious minorities, jailing and intimidation of journalists, and other abuses.

Within the Burmese diaspora, the event was controversial. On Facebook, a Burmese language post alleged that “all Myanmar and Rakhine people should be wary of this Muslim funded event which advocates for the takeover of the land and religion of Myanmar,” and called for “protection and vigilance… from both inside and outside the country.” The Rakhine are a predominantly Buddhist ethnic minority who have historically lived alongside the Muslim Rohingyas in western Myanmar. Relations between the Rakhine and Rohingya have taken center stage in Myanmar as religious tensions between Buddhists and Muslims surged across the country, as well as a wave of religious nationalism from Buddhist extremists – culminating in Myanmar’s massive genocidal expulsion of the Rohingya in fall 2017.

Buddhism has always played a central role in Myanmar’s identity, but growing up Burmese American I saw Myanmar’s significant ethnic and religious diversity through rose-colored lenses. Interethnic and interreligious friendships were common among in my family’s social circle when we lived there as well as after our departure, and I wanted to believe my country of birth was tolerant and inclusive. But as communal tensions flared in recent years, I wondered whether these tensions are really new or if they were always festering beneath the surface. I asked a handful of conference participants and others for their thoughts on these issues.

Buddhism and Myanmar are inextricably linked — a connection I believe to be dangerous to the health of democracy in Myanmar and to Buddhism itself.
-Hein Win Aung

Some of the participants pointed out that even if religious discord is now more commonplace, Myanmar has experienced significant religious turmoil in the past. “Myanmar has a history of cycling between overt intolerance and relative acceptance,” said one Burmese Buddhist who declined to be identified. “Moments of aggressive, physically violent persecution are often sandwiched between lulls of moderate acceptance, though institutional discrimination and social prejudices continue to exist.”

Hein Win Aung (no relation to this writer) is a Burmese Buddhist who grew up in the United States. “A look back at Burmese history reveals so-called Buddhist Bamar kings forcing religion and rule over other peoples,” he says. (The Bamar are the country’s predominantly-Buddhist majority ethnic group, which today constitutes about 60% of the country’s population.) Indeed, the 20th century in Myanmar saw bloody riots targeting individuals of Chinese and South Asian heritage – some of whom had lived there for centuries – as well as aggressive Burmanization of ethnic and religious minorities by the Bamar both prior to and after the British era.

The root of Myanmar’s ongoing struggle with pluralism lies in its rigid national identity, with Buddhism at its heart. “Buddhism and Myanmar, the nation, are inextricably linked,” said Hein Win Aung, “a connection I believe to be dangerous to the health of democracy in Myanmar and to Buddhism itself.”

Maung Aye is a Burmese Muslim who immigrated to the United States. “When I was young, there was much more religious tolerance,” he says. “The more you go back in the past, the more religious harmony you will find… Religious tensions are increasing, especially between Muslims and Buddhists.”

Stella Naw, a Christian of the Kachin ethnic minority, says that the increase in Buddhist nationalism has been stoked by the military and the government. “I wouldn’t say Burma has been a religiously tolerant state in my lifetime,” says Naw. “It’s the communities that lived peacefully.”  Like Maung Aye, she blames “carefully constructed propaganda” and “nationally designed policies to turn religious communities against each other” and foment religious discord. Naw also pointed out that Buddhists and Bamars dominate Myanmar’s government and military. An officer in the military, she notes, would be “prevented from any further promotion” for marriage to a non-Buddhist.

The link between Buddhism and Myanmar is so pervasive and insidious that many are unable to distinguish between the Burmese national identity and Buddhism as a religion practiced by most – but not all – Burmese. One Burmese Buddhist participant told me anonymously, “Until I was into my late teens, I didn’t even know that there were non-Buddhist Burmese… I hear people call Myanmar a ‘Buddhist country’ – as opposed to a Buddhist-majority country.”

“People will say ‘I don’t have anything against the Muslims, but they need to act like guests,’” she continued.  Today, there is no room within Myanmar’s identity for meaningful religious inclusion. Minorities are automatically accorded outsider status. This othering persists, even during the country’s “lulls of moderate acceptance.”

Myanmar needs protection and accountability. In Myanmar today, calls to protect the rights of vulnerable minorities are misperceived as affronts against the majority — a hostile “takeover” by Muslim outsiders of Myanmar’s land and religion. This inversion of reality demonstrates why we must hold Myanmar accountable for its misdeeds, protect the rights of religious and ethnic minorities, support civil society activists in the country, and promote religious inclusion in Myanmar’s national identity.