Lion’s Roar magazine’s associate editor Lindsay Kyte tries to master the microwave. Will she defeat her sense of defeat? 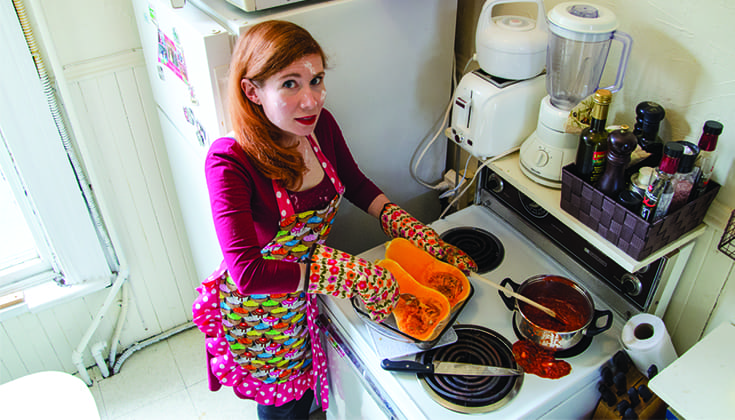 My cooking disasters are legendary. I have messed up boxed macaroni and cheese. Once I almost died trying to make a Thai curry.

Sounds impossible, you say? Well, read on: I put a glass casserole dish on the stove, turned the element on high, and added the dry ingredients. When I put in the coconut milk, the whole darn thing exploded into shards of flying glass that somehow missed my face and major arteries. A friend happened to walk into my apartment just as the dish exploded, and screamed in terror as he watched me almost die from trying to make curry. Ever since, he has only met me at restaurants.

You may argue this, but I often think cooking is a talent only some people are born with, like being able to sing on key or curl your tongue. I can do both of those things. But make a salad without the smoke alarm going off? Can’t seem to master that one. I have watched friends cook like they are conducting a symphony—they hear the music of the spices while canisters of parsley, sage, rosemary, and thyme dance above them in some yummy Simon and Garfunkel tune. One friend garnishes every single meal he makes, even if it’s just a snack for Netflix. I burned microwave popcorn for my Netflix viewing the other night, and then ate it straight from the bag. Do burnt parts count as garnish?

For most of my adult life, I have lived an artist’s life, where you are always on the road, there is never time to cook, and food is just fuel for the next gig. But when I was diagnosed with celiac disease, I really had to try to learn how to cook. Finding celiac-friendly takeout is a huge ordeal.

I asked an expert for help. My Aunt Kathy should own a cape for being able to skilfully master anything she takes on, including being a wonderful cook. She is one of those people so attuned to the needs of others that when someone upstairs realizes they’re cold, she immediately hollers, “The sweaters are in the closet.” Her meals are always delicious, and prepared with joy and love. Mine are prepared with terror, a sense of defeat, and dread of having to actually consume whatever is the outcome of these endeavours.

Aunt Kathy and I went out for some wine, and over some nice Malbec that was turning my teeth blue (I am a great date), I told her how I needed to find ways to get more nutritious food into my diet. She suggested cooking spaghetti squash instead of rice pasta. That sounded terribly difficult to me, but I am nothing if not brave (re: foolhardy). So I looked up a tutorial, marched on down to the grocery store, found a bin marked “spaghetti squash” (I’d never actually seen one), and threw one of those suckers in the cart.

When I got home, a nice lady with big hair on YouTube taught me how to make spaghetti squash in the microwave: Cut holes in it to let the steam out. Six minutes each side. Cut it open. Dig out the seeds. Run your fork down to “spaghetti” it (now a verb, according to Big Hair Lady). Enjoy.

I must have paused that video twelve times to make sure I was doing it right. I was so nervous. I would have preferred being on stage in front of a thousand people than in my kitchen trying to cook. I heard the microwave ding. I took the squash out. I cut it. I dug out the seeds. And goshdarn it if that spaghetti squash wouldn’t “spaghetti.” It would just “glop up” (a technical cooking term I just made up).

After some research, I discovered that the bin of squash had been mislabelled, and I had accidentally bought a butternut squash. But the cat insisted it would still be delicious with tuna and goat cheese (the cat always suggests tuna, and insists on a share). She was right. It was good. But it was not spaghetti squash.

I now had a picture of an actual spaghetti squash on my phone, I found one, and Big Hair Lady and I did our thing again. Lo and behold, that sucker spaghettied up like nobody’s business. I sometimes roll my eyes when people put photos of food on their Facebook pages. Look mine up. I darn well took a photo of that achievement. I’ve never been prouder of anything in my life.

I feel like this little adventure should come with a lesson. But I’m not a dharma teacher, just a person trying to overcome a crippling fear of cooking. All I can offer you is this: if somebody says you can’t do something, maybe you can. All you need is a Big-Haired Lady tutorial on YouTube, and some Buddhist teachings that continually rip the defeatist rug out from underneath you, until you give in. Then sometimes, you might unintentionally succeed.