The Democratic primary contender is the leading proponent of mindfulness in American politics. He talked to Lion’s Roar editor-in-chief Melvin McLeod about how to address the trauma in the heart of America. 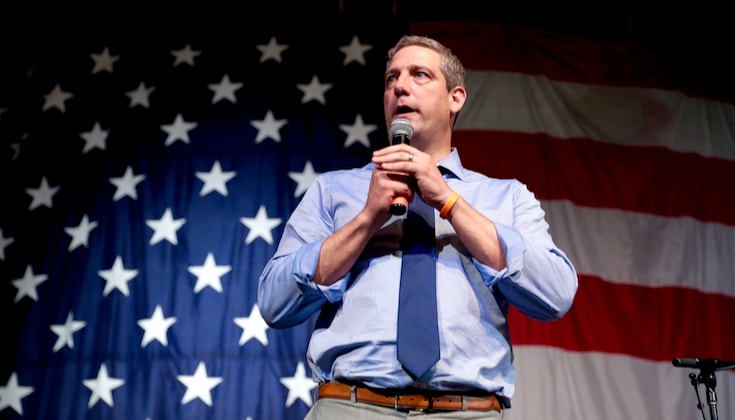 Tim Ryan, Democrat of Ohio, is currently running for president in the Democratic primaries. He is also the leading proponent of mindfulness as public policy. He talked with Lion’s Roar editor-in-chief Melvin McLeod about presenting mindfulness to America, trauma in American society, and becoming America’s “zen president.” This interview has been edited for length and clarity.

Melvin McLeod: When you’re speaking to your colleagues or speaking to the public about mindfulness, what specific areas do you point to in which the introduction of mindfulness practice and others such as yoga can be beneficial?

Tim Ryan: I think there’s three key areas. One is what we’re doing with our veterans, making sure that they have access to mindfulness-based stress reduction and other practices and approaches that help them reduce their post-traumatic stress.

Next, having these practices taught to teachers and implemented in the classroom — having the teacher model that behavior, learn some of these techniques and then begin to share them with the kids in the classroom. My approach to education is: how do we deal with trauma. If we don’t start with the trauma, we’re not going to get anywhere with the test scores.

And then the last piece is the healthcare piece. We want to start building out a system where doctors have training in mindfulness-based stress reduction and mindfulness-based relapse prevention for addiction. Where doctors are actually teaching this stuff to their patients before they start writing all kinds of prescriptions. This should be, you know, a tool in the toolbox too.

So, health care, education, and veterans are the three key policy areas.

You represent a district in Congress in Ohio that is heavily unionized, and you’re well-known as a spokesperson of the working class. At the same time, things like yoga and mindfulness can be seen as culturally strange. How do you take something that might be associated with Starbucks and present it in a way that is appealing to your home constituency, of blue-collar, working-class people?

Well, I feel like it’s almost my dharma in life to do that. And what we’ve done is really present it around the veterans. In Project Welcome Home Troops, they do a five-day Kriya Yoga breathing workshop, and it helps. They’re doing it around the country.

These vets are getting their life back. And, and then we say: well, if it’s helping vets with trauma, why wouldn’t we want to help our kids, who are having so much trauma right now? And then you start getting people comfortable with it that way. It’s been very effective. Who’s gonna argue with helping vets?

And I think that presenting these practices as effective ways of working with trauma makes a lot of sense. And the fact of the matter is that, right now, America as a whole is a very traumatized society.

No question about it. You see it everywhere. You see the mental health issues across the board. That’s why I want a mental health counselor in every school that wants one. We’re seeing all kinds of data and research coming in now about how trauma and adverse childhood experiences affect your microbiome, and how imbalance in your gut bacteria can lead to mental health issues.

And you can take it even one step further, and say: look, our earth is traumatized. We have algae blooms in our lakes. We have poisoned our soil to the point where it can’t absorb water. And we have huge flooding issues; it takes the fertilizer off the hard ground, puts it in the rivers, and takes it down to the mouth of the Mississippi, where it kills 220,000 metric tons of fish every single year at the mouth river. That’s trauma to our planet. That’s trauma to our earth.

It’s the inner trauma that has got us creating so much out outer trauma in our society. And so, if we’re gonna address that trauma, we’ve got to start going inside, with us, first, and heal that. And then a natural extension of that will be our communities, our society, the planet that we live on.

You once said, “Mindfulness is about paying attention, and how can you be against paying attention?” That that struck me as a very effective, common-sense way to present it that almost anybody could agree with.

We’re all frustrated, to some extent, with the lack of attention that’s paid. Your kids are staring into their phones, and their attention spans are being affected by the technology and the information overload. I find myself talking more and more on the campaign trail about “taking the temperature down in the United States.” Geez. The best example is the video of Times Square, a few weeks back, right after El Paso and Dayton. A motorcycle started backfiring and everyone started running. I met a woman a couple weeks ago who was there, and got trampled — had to go to the hospital. They were running in the bars and closing doors.

To me, that’s America, right there. That is the anxiety level. That is the stress level of America right now. We’re all kind of on edge. There’s just a level of anxiety in society. It’s economic anxiety. It’s concern about health care. It’s about the culture. It’s about what we see happen at the border. It’s about racial injustice.

A few weeks back, I watched the Ken Burns documentary on Vietnam. It is a marvelous account of what it was like at that time. I wasn’t born until 1973. But all I could think of, as a 46-year-old dad, husband, with three kids, is: this culture war, in various iterations, has been going on since then. And here we are, we’re still fighting. And now the phrase came back even a couple of weeks ago — “America love it or leave it” — which is what was being said during Vietnam

A few days ago you said, referring to the stress levels, that America needs a “zen president.” As the editor of a Buddhist magazine, I would have to point out that “zen” is not a pseudonym for “relaxed” or “low-stress.” But, nonetheless, the point was made that that leaders who can calm the level of division, emotion, and irrationality in American politics are badly needed — whether it’s Zen or something else.

Well, no question. And you know, obviously the cultural interpretation is not necessarily the Buddhist definition. It’s seen as “Don’t mess up my zen.” It’s penetrated the psyche — the zeitgeist of the country — so that a presidential candidate can even say that. I’ve tried to communicate in that way.