The crisis in Tibet offers Chinese authorities the opportunity to give Tibetans their human rights, and at the same time set China itself on a new and better course. As Robert Thurman explains, the key is a simple monk and his Middle Way. 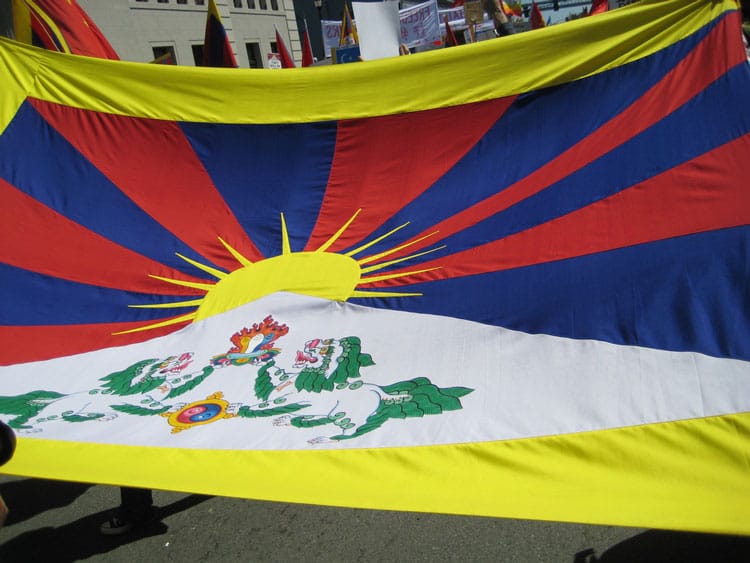 In Tibet today, the Chinese empire has forfeited any claim to legitimacy by harshly beating, shooting to kill, and imprisoning the almost universally religious Tibetans for the crime of possessing a photograph of their spiritual guide, His Holiness the Dalai Lama. Could there be anything more ridiculous than that? A giant empire, one that controls the lives of 1.3 billion subjects, with a huge military and economy, occupying the vast territories of three neighboring non-Chinese peoples—Mongolians, Uighurs, and Tibetans—is so afraid of a Buddhist monk who lives in a little hill town in exile, a man fully pledged to nonviolence and dialogue, that its leaders will openly kill people just for possessing his picture. It would be comic, if people were not losing their lives as I write this.

Nine men—the standing committee of the Chinese Communist Party politburo—hold dictatorial power over the entire Chinese empire. They are responsible for this absurd and ultimately self-defeating behavior, and they could reverse it in a moment. All they need to do is fire the culpable administrators in Tibet, call off their crackdown, launch a gradual criminal investigation of anyone, Chinese or Tibetan, responsible for violent acts, and proclaim to the world their intention to negotiate in good faith with the Dalai Lama. They could do this today. Even if our elusive sense of hope doesn’t inspire us to think they will, it is important to keep in mind that they really could. It would be easy—and they would gain tremendously.

Among all the world leaders, who could best help them? Who is the leader who most holds out the promise of turning things in a better direction, away from violence, empire, and nationalist egotism? Who is the leader who stands for peace, dialogue, compromise, self-restraint, and sharing? Who has practiced these principles for fifty-eight years under extreme duress? None other than the simple Buddhist monk, His Holiness the Dalai Lama.

The people of Tibet have stood up at the risk of their lives and said “no” to the Chinese occupation in a way the world can clearly see. They are saying “no” to the Chinese occupation that is suppressing their freedoms, taking over their land, extracting their resources, devastating their environment, banning their religious practices, preventing their education, and committing cultural genocide by trying to strip them of their Tibetan-ness to make them Chinese.

In this year of the Olympics, the Tibetan youth in exile thought to demonstrate with peace marches and protests to let the world know about their people’s dire situation. The Dalai Lama and the Tibetan government-in-exile could not support their activism, because of their pledge to India that they not do things to embarrass the Chinese. But the Tibetan youth were determined to engage in their protests, and they and their supporters have every right to express themselves.

Inside Tibet, the Tibetan people are saying their “no” mainly by peaceful, nonviolent protests, though these have at times turned violent when ruthlessly suppressed by Chinese security forces. The demonstrations were started by Buddhist monks who have been deeply disturbed over the last few years by Chinese vilification of the Dalai Lama and other intrusions into their monastic life. Around thirty monks from Drepung monastery were imprisoned last October because they celebrated the Dalai Lama’s receipt of the U.S. Congressional Gold Medal by whitewashing the monastery, since they were forbidden to hold an open celebration. On March 10 of this year, Tibetan National Uprising Day, other Drepung monks marched to the center of Lhasa to demand their release. They marched again on March 14 and were met by brutal beatings and arrests. That is how Lhasa exploded.

It seems that the Chinese authorities in Tibet were ready for demonstrations, and that they intended to start a cycle of violence to justify a mass suppression of the remaining Tibetan population of Lhasa, which has long been marginalized, reduced to poverty, and kept under strict control. Apparently the Chinese colonial administrator of Tibet, Zhang Qingli, who some time ago openly declared himself at war with the Dalai Lama, executed a plan he had devised to incite the Tibetan protesters to violence. Then, he may have imagined, he could blame this violence on the Dalai Lama and destroy his worldwide reputation as a teacher and practitioner of peace.

In fact, the Dalai Lama was surprised and keenly distressed by these brutal events. He always urges Tibetan monks and laity to be peaceful, to pursue their studies, to make the pledges forced on them by the Chinese authorities, and even to denounce him if pressed. He knows how they feel in their hearts, and that they will be expelled from the monasteries if they do not comply with the authorities. When the Chinese blamed him for inciting the violence, he invited impartial investigators to investigate the events in Tibet, and even to check his own private office in Dharamsala to see if there was any evidence that he in any way organized or incited the uprising.

The Dalai Lama has made it plain that he will have nothing to do with violence from any side. The wider world knows him well enough by now to know this to be true; the exception is a few fellow travelers of the Chinese imperium here and there, and some percentage of the mainland Chinese population (there are more skeptics within China than the government likes to believe).

The Dalai Lama stands by his Middle Way approach, despite the fact that Tibet is intrinsically free right now—by history, international law, the human right of self-determination, the illegitimacy of the mismanaging Chinese colonialist rule in Tibet, and the clear and courageous statement of the Tibetan people. Despite all that, he will still urge his people to vote to join a “United States of China,” on the condition that the Chinese reverse their colonialist policies and grant true “autonomous region status” to the whole of the Tibetan plateau.

This Middle Way would give China the legitimacy it craves through a voluntary act of self-determination by free Tibetans, and it would give Tibetans the freedom on the ground they deserve. It is a breathtakingly bold, realistic, generous, and intelligent solution, one that would help the Chinese leadership set themselves on the course of gradual democratization that China needs to come into its own as a truly harmonious society.

If President Hu Jintao does not take this opportunity, it will belong to the next supreme leader of China, the fifth since the founding of the People’s Republic of China. Whoever he is, by then he will have yet more evidence of how unworkable China’s current hard-line, neo-imperialist behavior is, and he will surely not pass up this golden opportunity. And the Dalai Lama will still be standing there, in his act of truth, patiently holding the key.